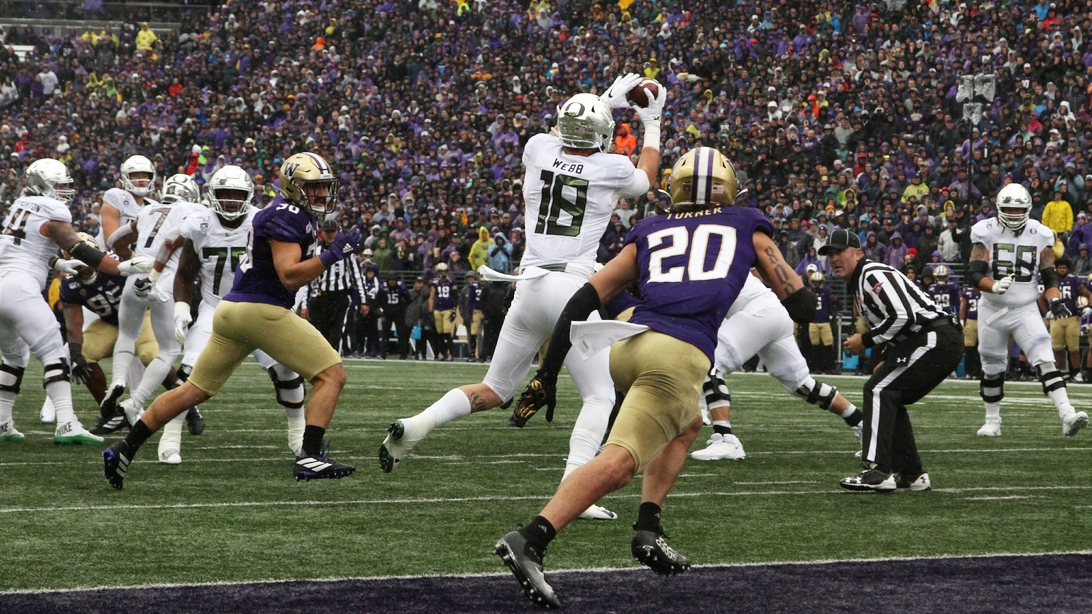 Once it was announced the leg injury to Jacob Breeland would be season ending, the Ducks were suddenly down to three tight ends on the depth chart after their victory over Colorado.

That victory felt bitter sweet as Jeveon Holland, Troy Dye and Jacob Breeland all going down with injuries, but while Holland and Dye have been able to return to the lineup, Breelands absence is a void the Ducks will need to fill.

How that would be accomplished was evident in the depth chart released by coach Mario Cristobal the following Monday. Oregon was back to fpur at the position with redshirt freshman Spencer Webb being moved back from wide receiver were he started the season.

With a depleted receiving corps and a crowded depth chart ahead of him Webb had been moved from his recruited position of tight ed to wide receiver during fall camp.

The move paid early dividends with Webb bursting on the scene against Auburn with a jump ball touchdown that put Oregon up 14-3 early in the season opener.  The touchdown was followed by an “Iverson step over” that caught the eyes of the nation with the highlight going viral.

As Juwan Johnson, Mychael Pittman and the now departed Brenden Schooler returned to the lineup from injury Webb was pushed down the the depth chart once again, making the move back to tight end an easy transition once Breeland was out..

Webb stated “getting his technique back” would be the most important part of going back to having a hand on the ground. He also noted with a smile that gaining some of the weight back after cutting down to play wideout “has been nice” with ‘burgers and pizza” a couple of the food items now back on the menu.

Spending time at wide receiver gave Webb the chance to work with reeivers coach Jouvan Bouknight who he credited for helping with his route running and creating separation from bigger defenders. At 6’6” and with improved technique Webb is something of a defensive coordinator’s nightmare.

And once again for Webb and the Ducks, the position shift paid early dividends when Herbert found Webb on a 12-yard slant for Oregon’s first touchdown Saturday against Washington. Webb added a 19-yard catch in the third quarter that help jump start the Ducks’ scoring drive after falling behind the Huskies 28-14.

With more reps during practices and a growing comfort level being back at his position, Webb is likely to find Herbert targeting him frequently during the second half of the season.