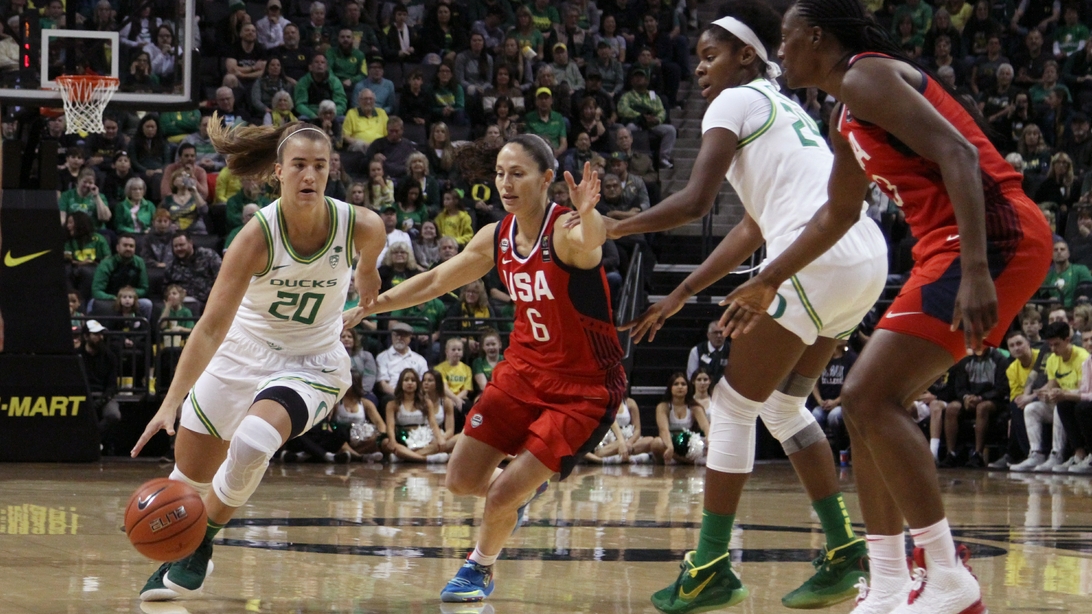 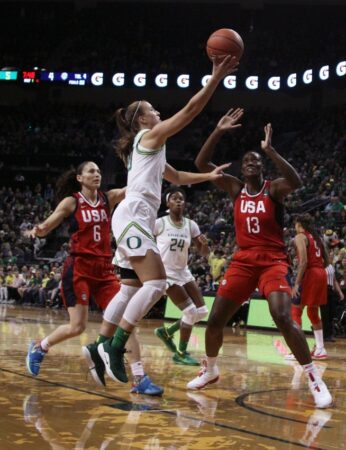 Team USA came into Eugene with a 43-1 record against college teams.

Oregon hosted Team USA in front of a packed Matthew Knight Arena crowd and accomplished something just one other team in history was able to do. The No. 1 Ducks turned a lot of heads tonight with a 93-86 win over a USA squad that is the prohibitive favorite to win the Olympic Gold medal.

The last time Team USA lost to a college team was 20 years ago when Tennessee hit a buzzer-beater for the upset. Oregon wouldn’t need a last second shot.

Sabally was in foul trouble for much of the night, but when the junior was in the game, the 6-4 forward showed why she is one of the most difficult players in the country to guard. She used her athleticism to drive to the hoop and to break herself open for a three-pointer here and there. Sabally scored 16 of her 25 points in the second half.

Team USA led at halftime 42-38, but when the third quarter ended, the Ducks held a slim 68-67 advantage.

The rally from the home team began in the second quarter, however. Oregon fell behind 37-26 and Ionescu was being contained for the most part. But then freshman Holly Winterburn nailed a three to get the deficit to single figures and Oregon was able to stay within shouting distance at the break.

Knowing a win over one of the best teams in the world was possible at halftime, the Ducks were able to play their best for the last 20 minutes of the contest.

Minyon Moore and Ionescu opened the third quarter with back-to-back threes for the 46-44 lead. After a Sue Bird three tied the game at 51-51 with 6:10 left in the period, both teams traded hoops until Oregon had a one-point lead with 10 minutes to go.

For the first five minutes of the fourth, it was all Oregon.

To their credit, Team USA didn’t go quietly. Diana Taurasi cut the deficit in half all by herself with three charity shots and a three. The former UConn star finished with 17 points and Nnemadi Ogwumike had a monster game with 18 points and 14 rebounds.

Team USA was able to slow Oregon’s offense down some in the fourth when they doubled-teamed Ionescu away from the basket, forcing her to give the ball up. It worked for a couple of possessions, allowing USA to pull to within 87-84 with a minute left, but when Ionescu found an open Sabally who then drove to the hoop and laid it in for the backbreaking five-point game with 35 seconds to go. Coupled with two Sabally free throws 13 seconds later, the Duck fans could go home happy.

Oregon will now try to regain focus as the regular season officially gets underway in just two days as the No. 1 Ducks host Northeastern on Veteran’s Day. The Huskies were 20-12 last season and made a WNIT appearance. The two teams will tip at 3 pm on the Pac-12 Network.