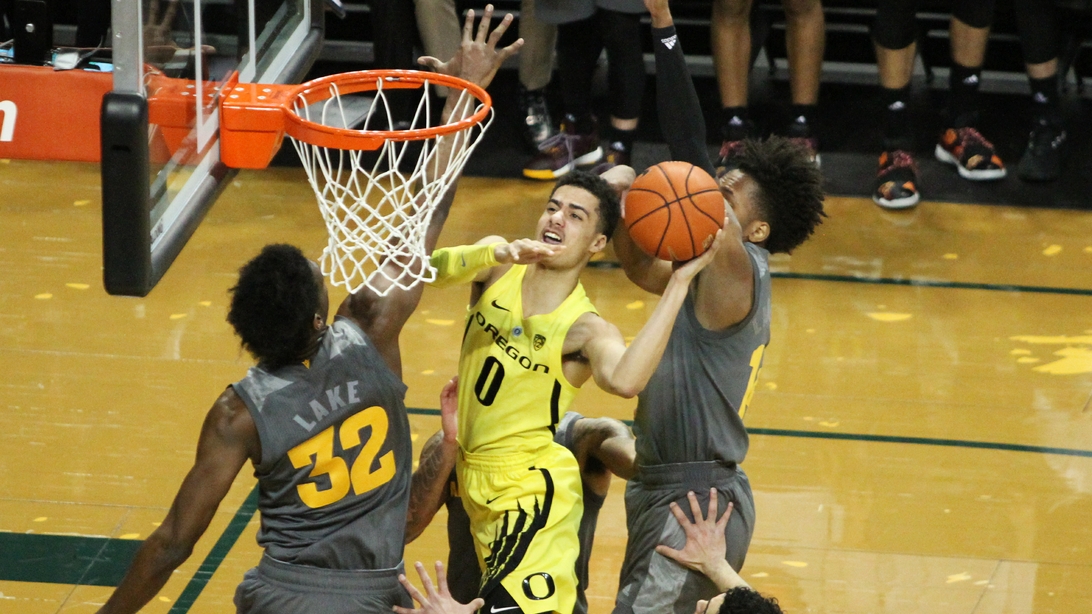 It’s no secret the absence of Will Richardson would make an impact early this season. The question was what type of impact would it be? Now five games into the season we now know two things; when Richardson may be ready to come back, and this team needs help at the point guard position.

In the first game this year against the University of Missouri, the Ducks looked lost. Scrambling to find defensive matchups as well as finding a team identity. It was the first game that many players had gotten to play with each other. Due to a shortened ramp-up to the season, combined with many new faces on the team. Also missing your pre-season all Pac 12 performer never helps. More importantly, they were missing someone to take control of the team. Late in the game newcomer Eugene Omoruyi, seemed to find that he would be that leader, but it was too little too late.

Since that loss, Dana Altman’s team is 4-0 and playing a lot better. However, something is still left to be desired watching the Ducks with the ball. One area of improvement is shooting from outside. This season, as a team Oregon is shooting a mere 32.4 percent from three-point range. The poor shooting has not discouraged players from trying, as they average just over 21 three-point attempts per game. Just two fewer attempts than their opponents. Even more problematic has been the team’s free-throw shooting, at 68 percent, they are 198th in the country. A bit of a change from last season’s team, whose three-point prowess kept them in many games.

Amauri Hardy has assumed the role of starting point guard in Richardson’s absence. A tough task considering the circumstance of not only being a transfer himself but having two other transfers within the starting five. While Hardy is shooting 50 percent from the field, he struggles as he distances himself from the hoop. Shooting just over 14 percent from three. With 39 percent of his shot attempts being from beyond the three-point line, one would hope this number will rise. The UNLV transfer is also averaging a career-high 2.4 turnovers per game, accounting for 37.6 percent of the team’s turnovers. The number might be a little inflated to the fact this is a new player on a new team. Also, he has assumed a big role for a newcomer. Contributing 25.6 minutes a night, it’s certainly a bigger role than Hardy had anticipated, at least this early in the season.

The backup role has been assigned to true freshmen Jalen Terry. If there are two types of players Dana Altman is tough on its; point guards, and freshmen. Terry has stepped up to the plate with great confidence but it’s also been a struggle for him as well. In his 17 minutes a game, Terry is shooting a poor 28 percent from the floor and just 22.2 percent from three. Jalen has gotten himself involved in the offense with a 16.1 usage percentage, which is a sign his numbers will also rise as more games are played and his confidence grows.

The two-point guards are scoring 7.8 points per game combined, three points less than Richardson’s point production from last season. So getting Richardson back sometime the second week of January will remedy the scoring deficiency at that position. Last season, the junior point guard shot an impressive 46.9 percent from three and 84.8 percent from the free-throw line. Just the boost this team needs in those departments as well.

Those numbers were also coming as Richardson was the team’s second most used player. Richardson’s usage rate was 18.7 percent second only to Payton Pritchard at 28.2 percent which was one of the highest in the Pac 12.

When Richardson comes back in January look for him to take the reigns on the team and become the leader this team needs. Getting a true “floor general” back will not only help scorers get the ball where they need but relieve some pressure from the other guards. Especially the players mentioned prior. This team has the pieces to make a big run this year and we have only seen the tip of the iceberg without Richardson on the floor.