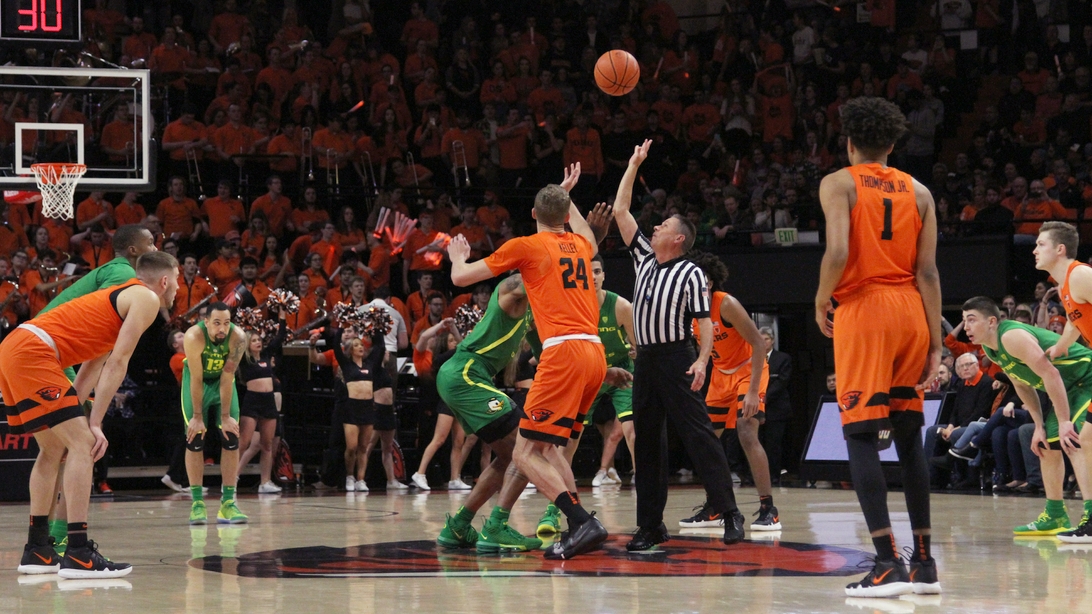 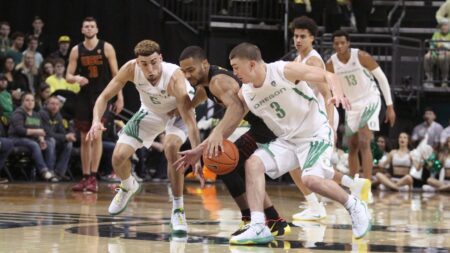 Oregon is suddenly finding itself with a huge problem not being able to score in the second half of games.

That problem cost the Ducks their second straight contest as they fell 63-53 in Corvallis to the Beavers in front of a sold out Gill Coliseum Saturday night.

Payton Pritchard led the way with 16 points, but it took him 21 shots from the field and it wasn’t nearly enough. Chris Duarte added 11. Those two were the only Ducks in double figures as they could just muster up 21 points after the halftime break.

The lack of offense after the break began just a few days ago when Oregon scored just 24 second half points in the 70-60 loss to Stanford.

With the loss, Oregon dropped to 7-4 in conference action and 18-6 overall. Oregon State improved to 4-7 in league play and 14-9 overall.

It was Reichle’s three-pointer with 1:17 remaining that sealed the Ducks’ fate. That made it 55-50 and a two-possession game. Given the fact Oregon wasn’t exactly lighting up the scoreboard, a five-point deficit with just 77 seconds left was insurmountable.

Oregon also went almost nine minutes in the middle of the second half without scoring a point. The Ducks were up 42-34 with 14:50 left. When they finally scored, it was 44-44 with 6:06 remaining.

The two teams went back and forth, but the Ducks found themselves down 52-48 with 2:27 left. Pritchard cut the deficit to two on a lay-in and the Ducks needed a defensive stop.

It looked like they got it when Oregon forced Thompson to take a long three to beat the shot clock. But the long rebound went to Kelley who found Reichle all alone on the left wing for a three.

Oregon’s offensive woes can be attributed to a few factors. The Ducks were once again shorthanded in the post with N’Faly Dante out with a knee injury and Francis Okoro away from the team to attend to his father’s funeral in Nigeria.

The combination of Shakur Juiston, Chandler Lawson and CJ Lawson proved to be ineffective down low. Juiston did collect 10 boards, but those three only scored 15 points.

Kelley’s presence in the key seemed to alter Oregon’s offensive game plan. There were many times where the Ducks got the ball in the key and just stopped. Oregon usually attacks the rim, but with Kelley there, Oregon was forced to pass the ball out for a three. The Ducks shot just four free throws the entire night, making two.

Oregon has to hope some home cooking will solve some of those offensive difficulties and the Ducks are looking towards a huge weekend with the Mountain schools.

First place will be up for grabs when the Ducks face Colorado Thursday night. The Buffaloes handed Oregon its first conference loss earlier in the Pac-12 opener 74-65 way back on Jan. 2.

Tip is scheduled for 6 pm on the Pac-12 Network.