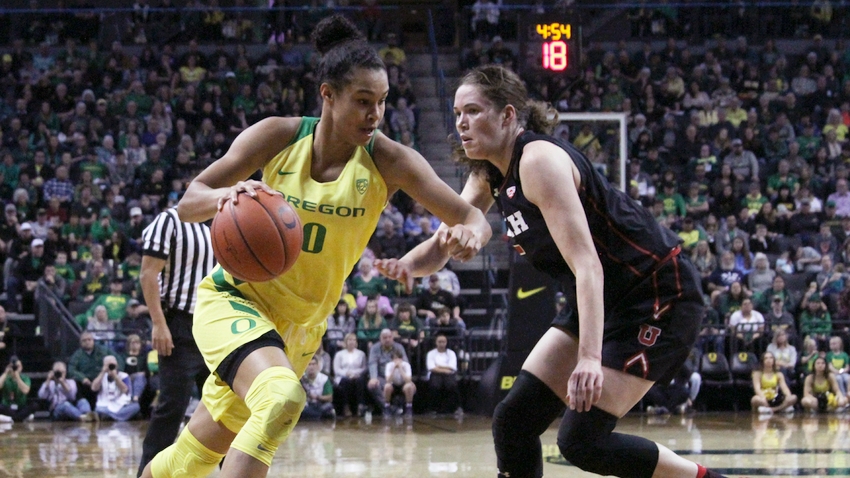 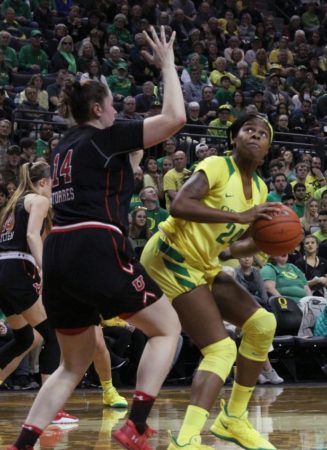 Satou Sabally continues to be the unstoppable force for the 4th-ranked Oregon Ducks, scoring a team high 20 points to lead the Ducks to an 87-65 win over the 14th-ranked Utah Utes Friday evening at Matthew Knight Arena.

On a night when Oregon’s All-America guard Sabrina Ionescu was a mere mortal with 11 points, the Ducks turned to the sophomore forward who has become a nightmare for opposing teams to defend.

Connecting on six of her nine shots from the floor, including two of three from behind the arc, and all six of her free throws, Sabally was one of six Ducks scoring in double figures against the Utes.

Fresh off a program first win over perennial Pac-12 power Stanford, the visitors trailed by as many as 13 points before the half then fought back in the third quarter to take the lead briefly at 56-54. Sabally buried a trey-ball and followed up with an old fashioned three-point play to send the Ducks into the fourth quarter leading 60-56.

Utah center Megan Huff was a handful for the Ducks all night long. Scoring a game high 38 points her “and one” to open the fourth frame brought the Utes back within a point but that would be the end of any thoughts Utah may have had about scoring a second straight upset of a top-10 team.

Sabally answered with a three point play of her own and added a pair from the free throw line on Oregon’s next possession. After going 1 for 7 up to that point, Ionescu sank a pair of three pointers sandwiched around two more free throws from Sabally and the Ducks were in full flight. Oregon outscored Utah 27-9 in the final frame to keep their conference record unblemished at 9-0; 20-1 overall.

“I really like the way we showed poise in that fourth quarter,” said Oregon head coach Kelly Graves. “The kids decided at both ends of the floor, we’re just going to knock these guys out.”

“I thought Maite (Cazorla) and Satou were great in the fourth quarter. Maite attacked the basket a little bit and gave us some calmness offensively. We were organized a lot better in that fourth quarter … Satou just made some big-time plays off the dribble.”

Cazorla and Ruthy Hebard each added 16 points, Erin Boley hit for 14 and Oti Gildon came of the bench to contribute 10 points.

“Credit Utah for really battling,” Graves said. “This is a tough environment. They have four freshmen who played and they haven’t played in an environment like this but in the end, I just think we were the better team.”

Up next the Ducks host Colorado Sunday afternoon for a 12:00 pm tip-off. The game will only be available on the Oregon LiveStream.