Running Back Darrian Felix – A Breakout Waiting To Happen

HomeFeaturedRunning Back Darrian Felix – A Breakout Waiting To Happen 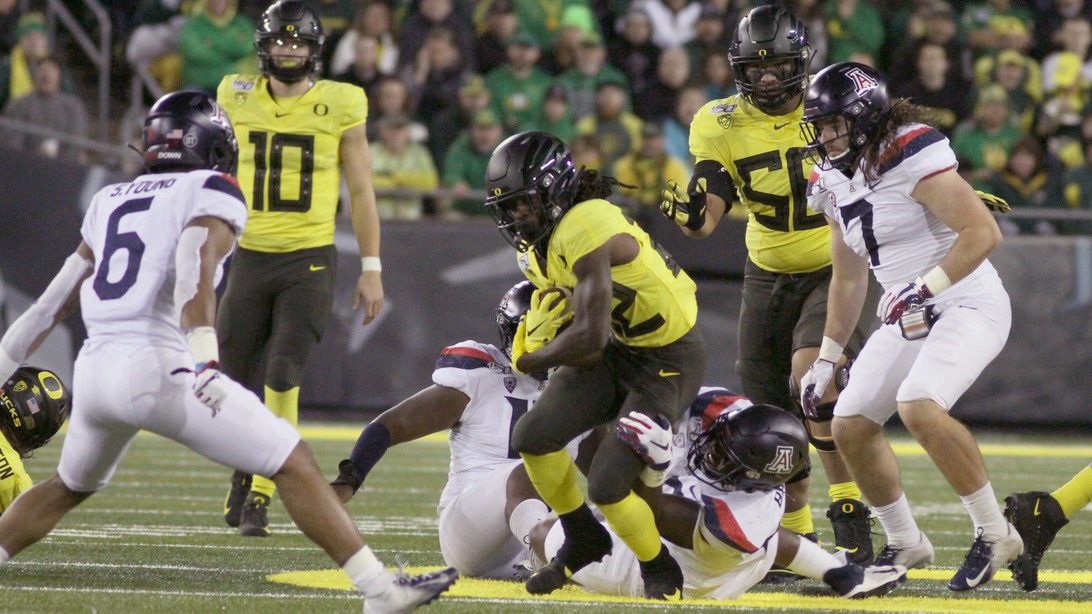 Running Back Darrian Felix – A Breakout Waiting To Happen

One year removed from being redshirted two games into his sophomore season due to injury Darrian Felix seems to be finding his stride. Highlighted by getting a career high ten carries against USC racking up forty three yards as well as hauling in a 27 yard reception, in a convincing win at the Coliseum.

In 2017 Felix arrived on the Oregon campus as a three star recruit and his impact was immediate – reaching the end zone in his first game as a Duck and eventually recording 30 carries for 182 yards in his freshman season. Respectable numbers particularly in light of the fact most of the touches that season went to the now NFL running backs Royce Freeman and Tony Brooks-James.

After tearing a ligament early into his sophomore season a redshirt was utilized to save his year of eligibility.

Sometimes a player can get lost in the depth chart after a season ending injury; waves of incoming freshmen and other players maturing into bigger role means a player coming off rehab begins at square one.

In a backfield deep with talent and experience, Felix again made an immediate impact upon his return to the lineup, scoring a touchdown in the highly anticipated matchup with Auburn to kick off the 2019 season.

Over the next two weeks he continued to impress, accumulating 120 yards and one touchdown on 16 carries but once conference play commenced Darrian found his role diminished as C.J. Verdell, Cyrus Habibi-Likio and Travis Dye became the featured backs.

“Teammates, family and coaches helped me stay aligned and stay focused” was Felix’s response when asked how he kept himself focused during his stretch of not seeing the field for nearly a month. When I asked what he does on the sideline to stay engaged while waiting for his turn on the field he noted watching the movement from the defensive line and line backers. “I watch the D line to see how quickly they get off the ball and I see if the linebackers can run from sideline to sideline.”

Being attentive to what is happening on the field from the sideline was something Felix was adamant about getting when asked about how he got his reps back after the drought by also noting “it helped me get a chip on my shoulder” which was apparent in his running style against USC. Felix described himself as a “powerful back for his size” with a “hit the hole and go” mentality.

Traits that will serve Felix well given head coach Mario Cristobal’s “ground and pound” offensive mentality, and with a “play the hot hand” approach to play calling, a break out game is just a matter of “when” for the Fort Myers, Florida native.