The Point After: Week Fourteen

Featured Football The Point After

The Point After: Week Fourteen 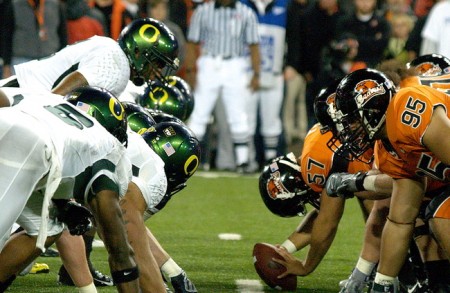 When anyone buys a brand new car and expects to keep that car for a number of years, it takes some time to know all the ins and outs of that car. Over time, one slowly figures out what kind of terrain that car does well in or how many miles you can go with that gas light on.

In figuring out all of those intricacies, sometimes you’ll experience a flat tire or go too many miles with that gas light on and run out of gas.

For Mark Helfrich, the gas light came on at Stanford and blew a tire in Arizona.

The Coos Bay native is slowly figuring out how this car called the Oregon Ducks football program works. Chip Kelly gave him a Maserati to drive and while Helfrich has sat in the passenger seat, riding in a Maserati is vastly different from actually driving 150 mph in one.

He may have blown a tire or ran out of gas, but Helfrich is far from crashing the U of O’s prized possession.

Kelly was lauded as the savior of the Duck program and by all accounts, he was. Four straight BCS bowl appearances, a Rose Bowl win and a national title appearance will make anyone a savior.

He then handed the keys to Helfrich, but it’s silly to expect the first-year coach to drive the hot rod exactly the same as Kelly. While Kelly grabbed the keys from Mike Bellotti and vaulted over the door into the driver’s seat and went from zero to 150, Helfrich opened the door, gently sat inside and took it for the casual spin called the 2013 season. He’s easing into turns and obeying the traffic signs.

But make no mistake, Helfrich knows that this car can go 150. He sat right next to Kelly as the car was speeding down the road. He will put the pedal to the metal eventually, but he needs to run through the gears and learn from the early mistakes so they don’t happen again.

And don’t forget, Kelly’s first ride didn’t go so smoothly either. Remember Boise State and the Punch heard around the Northwest? Kelly announced from then on, this team wasn’t going to be judged as character, but a team with character.

The rest is history.

Helfrich is now facing a similar situation in his first year. The Ducks ran into a tougher team in Stanford and they were just plain flat and not ready to play at Arizona. They are also dealing with something they never did with Kelly, a sense of vulnerability.

The rest of the Pac-12 can see the Mazerati isn’t going 150 right now and they all feel like the Ducks can be caught and beaten given the right circumstances. Arizona proved that. Now Oregon State is waiting in the weeds, hoping to kick its rival while they’re down.

If there’s a week for Helfrich to say the heck with it and throw caution to the wind to drive 150 again without the worry of wrecking, this is the week. Oregon needs to not only win, but win big, to show everyone, fans, the Pac-12 and the nation, that the Ducks have not gone away and they won’t be going away for a very long time.