HomeFeaturedOut of the Pac – Week Twelve 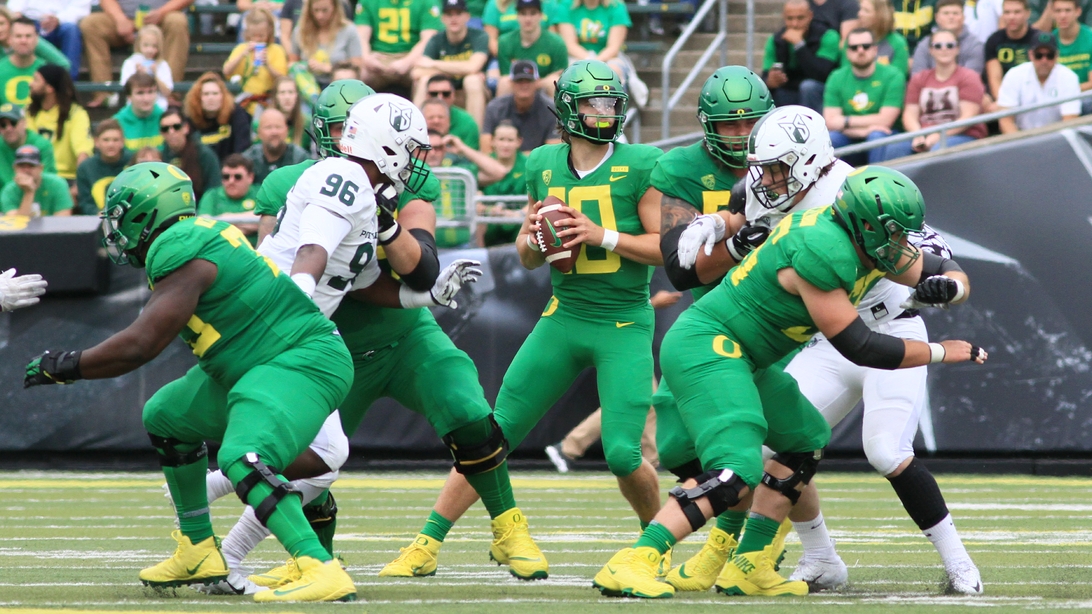 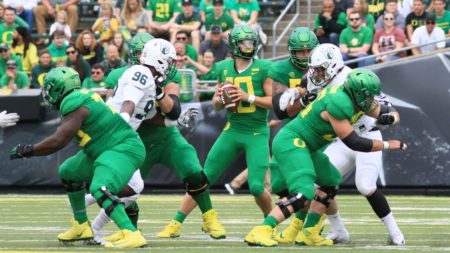 Three right, two wrong with last week’s picks puts the season mark at 52-23 heading into the final two weeks of the regular season. A pair of rivalry games is on the docket with the Big Game being postponed until December 01 due to hazardous air conditions in the Bay Area due to wildfires. First a quick review of last week’s contests.

Saturday, Nov 10
Stanford 48 – Oregon State 17 (pick: Stanford 33-24)
Stanford scored early and often to take a 34-17 halftime lead and never gave the Benny’s a chance to even think about an upset. The return of running back Bryce Love had a transformative effect on the Cardinal offense with 11 carries for 90 yards but served to open up the Stanford passing game to the tune of 352 yards passing and four touchdowns. As team the Beavs coughed up just short of 600 yards of total offense.

California 15 – USC 14 (pick: USC 27-15)
The soap opera in LaLa Land just keeps getting weirder… the vaunted mighty Trojans gained a very pedestrian 277 total yards against what has grown to be a very sturdy California defense but despite allowing the Bears only 207 yards of offense, surrrendered15 third quarter points to give the Bears their first win in the Coliseum since 2000, the year before Pete Carroll arrived at Heritage Hall. With the win California is bowl eligible for the first time under head coach Justin Wilcox.

Arizona State 31 – UCLA 28 (pick: Arizona State 38-21)
ASU running back Eno Benjamin was the story in what was a back and forth slugfest in Tempe. The 5’ 10”, 210 lb. sophomore work horse was given the ball 34 times, good for 182 yards rushing and touchdown. N’Keal Harry added 100 yards receiving on seven catches as the Sun Devils grabbed the inside track to the southern division title.

Washington State 31 – Colorado 7 (pick: Washington State 48-27)
The Buffs took a 7-0 first quarter lead then did nothing while Gardner Minshew and the Washington State Cougars stampeded Colorado in Boulder. Minshew completed 35 of 58 attempts for 335 yards and a pair of scores to keep the Cougars in the driver’s seat for the northern division crown.

Utah 32 – Oregon 25 (pick: Oregon 38-17)
Oregon’s road woes continue and along much the same script. A slow start – and with Arizona excepted – a furious comeback that falls just short in the end has played poorly in Pullman and again in Salt Lake City. After the Ducks took 25-22 lead thanks to a blocked punt, a completely unfathomable unsportsmanlike penalty on the ensuing kickoff gave the Utes the ball on the 40 yard line and you know what they say about Kharma… it’s a —–. And Utah took advantage of the field position to score the game winning touchdown five plays later.

Saturday, Nov 17
Oregon State @ Washington
The Huskies season has boiled down to the Apple Cup and the Beavers aren’t going to spoil that party this week. Washington 48-17

Stanford @ California
Postponed due to smoke from the wildfires in the area, the Big Game will be played instead on December 1.

USC @ UCLA
Injuries have hobble the Trojans there is no doubt… but for all the five star talent that signs on the dotted line each February, USC sure ends up with not much to show for it in November more often than not the past few years. Chip Kelly has his work cut out for him in Westwood but at least his team is playing for him and for each other… something that regularly seems to be a missing ingredient across town. UCLA 38-35

Utah @ Colorado
Give the Utes credit for overcoming a pair of key injuries and not skipping a beat in beating the Ducks a week ago. Colorado has floundered since opening the season with five straight wins and nothing would take the sour taste of losing five straight since better than knocking off Utah. On the road those replacements that played so well against Oregon may struggle a bit at first but they showed themselves to be more than capable of beating the likes of Colorado. Utah 34-21

Arizona @ Washington State
First one to 45 wins… and since it is in Pullman, that should be the Cougars. WSU 48-38

Arizona State @ Oregon
Although Oregon has been a much different team in the friendly confines of Autzen, ASU will present challenges in areas the Duck defense has struggled with, and not just on the road. N’Keal Harry at wide receiver will be a handful for whatever combination of defensive backs Jim Leavitt dials up against the 6’4”, 213 lb. junior. And sophomore running back Eno Benjamin packs a wallop that will require Oregon to get squared up at the point of contact and to always try to force Benjamin toward additional help. If Oregon continues to arm-tackle they will see these two put up triple digits in yards after contact and yards after catch. They simply cannot afford to let that happen. Let’s say Oregon does get pressure on ASU quarterback Manny Wilkins and they are able to swarm Benjamin before he hits the open field… they do that, Justin Herbert and the offense will find 35 points and that’s enough for a 35-31 win on Senior Day.