HomeFeaturedOut of the Pac – Week Thirteen 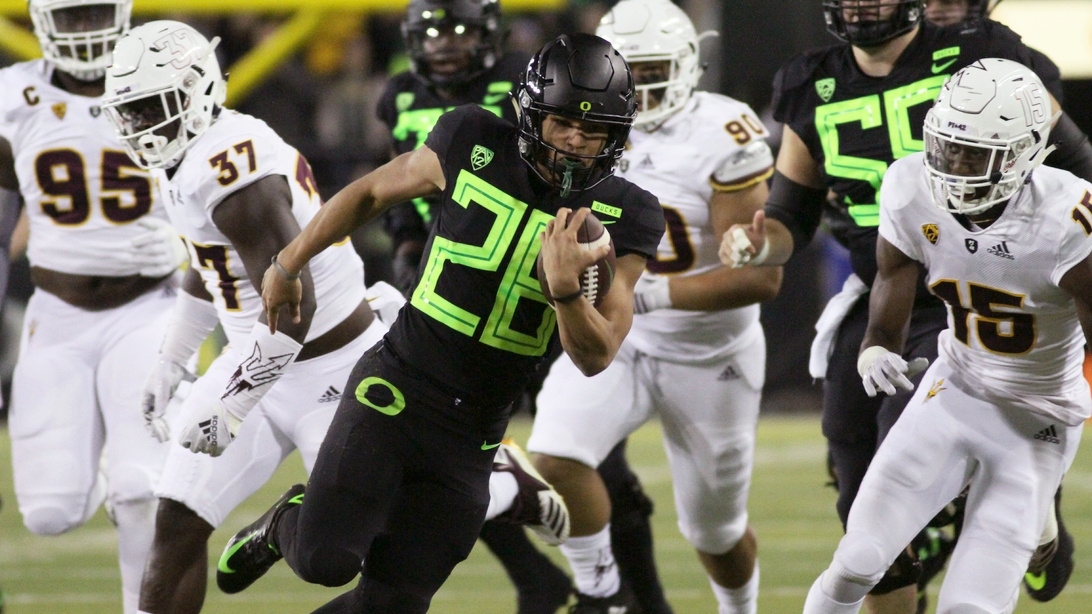 Life in the Pac-12; oh-for-four one week, five-and-oh the next. With the season mark now at 52-26 we head into the final two weeks of the regular season. A full conference slate awaits, but first a quick review of last week’s results.

Saturday, November 16
Utah 49 – UCLA 3 (pick: Utah 38-21)
A tale of two quarterbacks – Utah’s Tyler Huntley completed only 14 passes but averaged better than 18 yards a catch, good for a pair of touchdowns while the Bruins’ Dorian Thompson-Robinson was picked twice and the Utes took another step toward the southern division title.

Washington State 49 – Stanford 22 (pick: WSU 35-24)
Both quarterbacks threw for more than 500 yards but it was the Cougs that had the better ground game thanks to Max Borghi. The sophomore running back gained all 111 forward yards of rushing credited to the Cougars while the WSU defense held Stanford to six – count ‘em….1-2-3-4-5-six net yards rushing. Anthony Gordon had five touchdown passes as Washington State pulled away from Stanford in the second half for the win at home.

Oregon State 35 – Arizona State 34 (pick: OSU 33-23)
Give the Beavs props for what is to date the best win under second year head coach Jonathan Smith. Oregon State’s defense remains a liability but there is no denying the improvement on that side of the ball since the season started two months ago. Criticism of ASU head coach Herm Edwards to go for the road win with a two-point conversion attempt is unwarranted and the larger point to take is the OSU’s defense demonstrating a resolve not seen in Corvallis for some time now.

USC 41 –California 17 (pick: USC 36-27)
The Trojans used a 17-point third quarter to dispatch the Bears in Berkeley. Kedon Slovis completed 29 of 35 pass attempts good for 406 yards and four touchdowns while California’s season long struggles on the offensive side of the ball offered no indication the situation will soon change.

Oregon 34 – Arizona 6 (pick: Oregon 55-17)
Justin Herbert and Johnny Johnson III teamed up for a 73-yard haymaker on the second play from scrimmage to knock the Wildcats out of the contest early. But at the end of the night it was an Oregon defense that held a potent Arizona offense to a pair of field goals that stole spotlight.

Saturday, November 23
Washington @ Colorado
A tricky game for the Huskies… and with each team coming off a bye the trickeration quotient may well be a determinative factor. Washington is favored by two touchdowns but that’s too much. An upset by the Buffs wouldn’t completely surprise but Washington holds on for a 27-17 win in Boulder.

Utah @ Arizona
The Utes are better on both sides of the ball, they have the inside track to the southern division title and like Oregon, still harbor thoughts of an invite to the CFP. There won’t be an upset in Tucson… Utah 38-23.

Oregon State @ Washington State
Win and you are bowl eligible. Lose and you have to beat your rival on its own field to get that necessary sixth win to extend the season into December. More than the appearance itself it is the additional practice days that are the true benefit to a program and for each team that need is real as they try to find a way up the standings. In the right here and now it is Washington State that is better positioned to seize the opportunity… particularly at home. WSU 47-31.

California @ Stanford
Inconsistent or incompetent offense has been the story for the Bears since the conference season got underway. A win over the Huskies was a highlight for certain but still – to win consistently in the Pac-12 you have to score points and Cal hasn’t. Stanford hasn’t to the degree or in the style typical of a David Shaw team but more so than the Bears. And Stanford needs to beat both California and then Notre Dame to gain bowl eligibility, for the Bears a win over either Stanford or UCLA next week would suffice. With a nine-game winning streak in the series and the home field, the pick is with Stanford 28-25

UCLA @ USC
Like the Cardinal, the Bruins find themselves needing two wins if they hope to extend the season into December. The Trojans are nearly a two touchdown favorite, are playing at home and one week ago UCLA was thumped and thumped hard by Utah so by every line of logic the pick should be with USC. The Chipsters stunned USC a year ago 34-27 to get the “fire Helton” conversations underway around Heritage Hall… they will take on a renewed urgency after UCLA heads back across town with a 36-33 win in their pockets and a two game winning streak in the series. .

Oregon @ Arizona State
One of the consistent thoughts expressed by Oregon head coach Mario Cristobal is that his team hasn’t played its best ball yet. Now would be a good time for that to happen. A very dangerous Arizona State team awaits, with a motivated Oregon State team to follow a week later – not to mention a likely date with Utah in the championship game – so the timing couldn’t be better for the Ducks to put all the pieces together for the stretch run. ASU quarterback Jayden Daniels creates problems all over the field with both his arm and his legs so the first order of business for the Ducks will be to make certain the pass rush keeps the freshman confined between the hashes and can get hands up into the passing lanes. With a quartet of dangerous receivers and a bowling ball of a running back in Benjamin Eno, the task of keeping the Sun Devils off the scoreboard depends on keeping Daniels from both having the time to find open receivers without yielding big yardage when he tries to find something with his feet. If the Ducks can accomplish that then Eno becomes a more manageable concern for the Oregon defense. Unless the Oregon offense hurts itself with penalties and turnovers there are enough points to be found against a somewhat porous ASU defense for the Ducks to cover the two touchdown spread. Oregon 44-28.