Out of the Pac – Week Seven

HomeFeaturedOut of the Pac – Week Seven 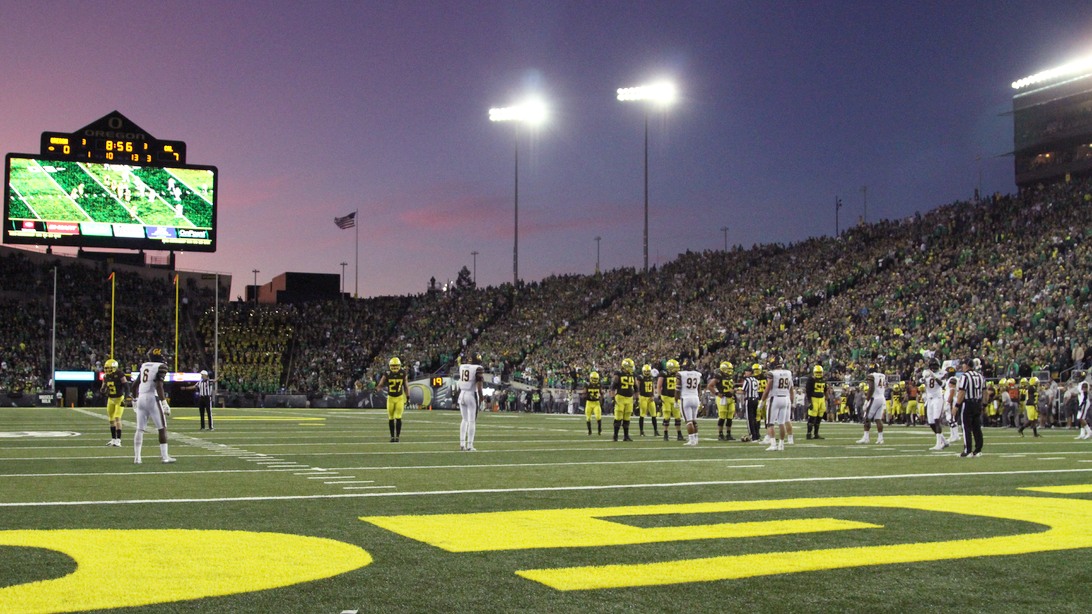 Out of the Pac – Week Seven

Three good, one clunker with the week six picks puts the season tally at 31-18. Oregon and Colorado get the parade started on Friday night at Autzen.

Stanford, California and UCLA take the week off while USC steps outside of conference play to face Notre Dame in South Bend.

A recap of last week’s results starts us off.

Saturday, October 6
Stanford 23 – Washington 13 (pick: Washington 37-18)
Cameron Scarlett ran for a career high 157 yards and Stanford upset the Huskies with back up quarterback Davis Mills again filling in for K. J. Costello and completing 21 of 30 attempts for 293 yards and one touchdown. The Huskies offense sputtered with Jacob Eason going 16 for 36 while the ground game could muster only 88 yards against the Cardinal defense.

Arizona 35 – Colorado 30 (pick: Colorado 28-21)
Wildcat quarterback Khalil Tate torched the Colorado secondary for 404 yards and three touchdowns, completing passes to 11 eleven different receivers in the process. With a chance to take the lead, Colorado drove to midfield but turned the ball over on downs with 2:23 left in the game and suddenly Arizona is 2-0 in conference play and in first place in the southern division.

Oregon State 48 – UCLA 31 (pick: Oregon State 35-24)
The Benny’s jumped on the Chipsters early and often, taking a 21-0 first quarter lead then basically traded field goals and touchdowns the rest of the way for their first win in the Rose Bowl since forever. OSU quarterback Jake Luton was nothing less than spectacular, completing 18 of 26 for five touchdowns and ran for a sixth. Playing without starting quarterback Dorian Thompson-Robinson, after giving up touchdowns on Oregon State’s first three possessions, the Bruin offense found some life, rolling up 492 total yards of offense against the Beaver defense. Too little and much, much too late.

Oregon 17 – California 7 (pick: Oregon 44-17)
Three turnovers and a pair of entirely unnecessary penalties in the first half short circuited Oregon’s offense and the Ducks walked off the field at the half trailing 7-0. Camden Lewis connected for his first collegiate field goal from 28 yards seven minutes into the third quarter to get Oregon on the board. In an exchange of punts, Oregon’s Blake Maimone pinned the Bears on their own ten yard line and the Duck defense forced an immediate three and out. Punting from his goal line, Steven Coats was hurried and out kicked his coverage with line drive kick to Oregon’s Jevon Holland who knifed through the coverage for 24 yards to give the Ducks the ball on the California 30 yard line. As the ol’ ballcoach always said… special teams can win you a ballgame. On the second play from scrimmage Justin Herbert connected with Jacob Breeland for 30 yards and Cyrus Habibi-Likio packed it in from the one, giving Oregon a 10-7 lead. Troy Dye intercepted California quarterback Devon Modster midway through the fourth quarter. After an unsportsmanlike conduct penalty gave Oregon the ball at the Bear 49-yard line, Justin Herbert engineered a 5-play scoring drive featuring a 26-yard tuck and run for a first down before eventually connecting with Jaylon Redd from one yard out.

Friday, October 11
Colorado @ Oregon
The thought was the Oregon offense could come to life against California thanks to the return of several injured players but that wasn’t the case. Brenden Schooler and Mycah Pittman clearly add to the Ducks options in the passing game but a stout California defense and perhaps an element of rustiness kept the Oregon passing game from fully coming together. The next thought is that happens this week against a suspect Colorado secondary. Oregon 44-17.

Utah @ Oregon State
Carving up UCLA’s defense is one thing. Finding touchdowns against the Utes is quite another. It was fun while it lasted but the match up here is all wrong for the Beavs… Utah lights up the OSU defense for a 44-28 win in Rice-Eccles.

Washington State @ Arizona State
My how far have the Cougars fallen since the debacle against UCLA. Once thought as a contender for the northern division title, Washington State in winless in Pac-12 play and will be facing a Sun Devil team that is young but learning quickly. Utah’s defense held the suddenly impotent WSU offense to a paltry 13 points while manhandling the Cougar defense for 528 total yards of offense. The Sun Devils aren’t quite up to the measure of 18th-ranked Utes on either side of the ball at this point in the season but the matchup problems they will present Washington State are similar. ASU 38-25

Ninety times these two have met. The Irish lead the series 47-37-5 and had the bigger number on the scoreboard at the end of the last two contests. The return of Kedon Slovis at quarterback for the Trojans is a plus but by no means the answer to what has been an inconsistent USC offense. Slovis was lights out in his debut at home but struggled on the road before being injured. South Bend will be a challenging environment to return to the lineup however beneficial a bye week may have been to his recovery. Favored by 11.5, the Irish win but not by that much – 33-31.