HomeFeaturedOut of the Pac – Week One

Featured Out of the Pac 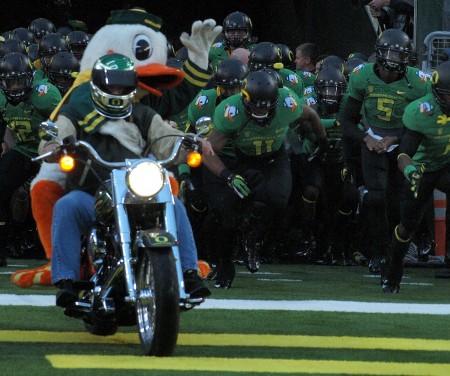 The 2012 football season gets an early start with four Thursday games, one on Friday and six on Saturday. Last year’s mark of 66-32 (including bowl games) with the weekly picks was a respectable showing but as every football coach will tell you, everybody leaves fall camp 0-0. The notion of betting on the outcome of games played by kids 18 to 22 years old is the portrait of insanity so as always take the point spreads offered as the tongue-in-cheek exercise they sometimes are…

On to the Week One picks:

The Utes have high hopes for the southern division and beyond this season and justifiably so. Utah returns a solid defense and offensively should be more potent than they were last year with the return of quarterback Jordan Wynn. Utah struggled early last year, losing to Washington and Arizona State after Wynn was injured. Backup Jon Hays eventually helped the Utes turn things around to win six of their last eight although the season ending loss to Colorado is inexplicable. The point being made is that quite literally Northern Colorado will be out of their league and Utah wins big 42-13.

A coin flip – heads UCLA, tails Rice – might suffice… UCLA has a history of losing games they should win then turning around and knocking off someone they have no business beating. Rice isn’t quite in the former category and certainly isn’t in the latter. The Owls could enjoy a home field advantage if more than 30,000 fans show up but that’s probably a stretch. Just on talent and depth, UCLA has enough to post a 27-17 win to inaugurate the Jim Mora era.

The most underachieving team in the Pac-12 over the past 10 years? The Sun Devils get my vote… and when the wheels do come off in Tempe, it’s all four of them at once. With the exception of 2007 ASU has made the four or five game losing streak a recurring theme. While Northern Arizona more frequently serves as non-conference cannon fodder for the team in Tucson they will suffice in this instance for the Sun Devils and Todd Graham gets the first of his three season victories in week one, 31-14.

A three digit scoring column might be needed at LaVell Edwards Stadium for this one, both teams are going to score points in bunches. The temptation to pick Wazzu for the upset in Mike Leach’s first outing as the Cougar’s coach is strong, but with the game in Provo it’s the other Cougars who draw first blood… 45-42.

There was a time in the not to distant past one could pick the Spartans for the upset and see it come to pass every other year or so, but no more. With Andrew Luck in the NFL, Stanford isn’t the Cardinal of the past two seasons but San Jose State is in way over their heads for this one. Farmers 52-13.

It’s the debut of the remodeled Memorial Stadium so if the Bears lose this one California head Jeff Tedford’s hot seat will be scorching. And it is not out of the realm of possibility – the Wolfpack returns a solid nucleus of players and should improve on their 7-6 overall record last year. Still, Cal QB Zack Maynard has a year under his belt and is expected to be a more consistent player than he was in his first year under Tedford and the Bear defense will be stout if not overpowering so the nod has to go to the home side – 32-17.

Game postponed due to Hurricane Isaac – no make up date announced.

A neutral site (Sports Authority Field at Mile High, Denver) rivalry game and one of three Buffalo victories in 2011. Colorado will be better in 2012 – Colorado State won’t… Buffs by a couple of touchdowns, 31-17.

By all rights this one should be in Hawaii – that way USC quarterback Matt Barkley could walk to work – but instead he will throttle the Rainbow Warriors in the Coliseum, 58-10.

The first upset special of the season… just not drinking the Kool-Aid for the Huskies quite yet here at Out of the Pac headquarters. Yes, the program has made strides under third year head coach Steve Sarkisian – but the cupboard was pretty barren when he took over from Tyrone Willingham – particularly on defense. Improved recruiting classes have helped and so will the addition of ex-Duck Justin Wilcox as the new defensive coordinator. But a full turnaround is still at least two, maybe three years away and in the meantime ex-Oregon State quarterback Ryan Katz has assumed the starting role at San Diego State after an off-season transfer. With the Huskies still vulnerable defensively and perhaps with a diminished offensive punch with running back Chris Polk in the NFL, the Aztecs waltz into Montlake  and steal away with a 24-21 upset.

Buy a game program – every Duck should see playing time in this one. Not that Arkansas State is a poor football team – they finished the season 10-2 last year and are the returning Sun Belt Conference champions. But while new head coach Gus Malzahn is an acknowledged offensive genius – it is difficult to imagine the Red Wolves coming out and matching the Ducks point for point the first time they take the field using his system… and the Ducks will score points. 65 of ‘em while Oregon’s defense limits the Red Wolves to less than a dozen (10).

The Rockets finished 2011 with a 9-4 record and are expected to again finish near the top of the MAC standings so on the surface it wouldn’t be a surprise if Toledo upended the Wildcats in Tucson. New Arizona coach Rich Rodriquez inherited a pretty dispirited group when he took over for Mike Stoops but he does have the most important ingredient for success already in place – an honest to goodness spread option quarterback in Matt Scott. Wins will be difficult to come by as the Wildcats retool but they will get out of the gate on the right foot, 33-24.