HomeFeaturedOut of the Pac – Week One 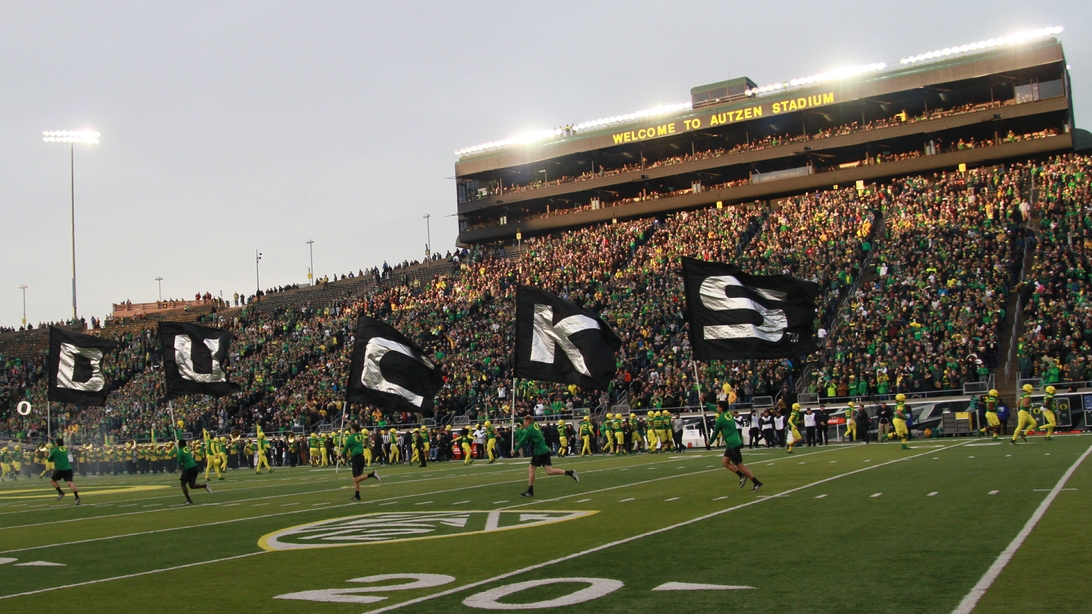 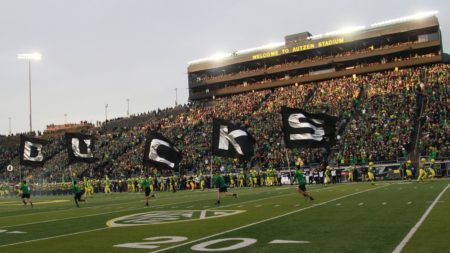 We start our 15th season of covering the Ducks and the Pac-12 coming off a 63-24 record with the weekly exercise in throwing darts that is a Pac-12 football season. An interesting year awaits on many fronts and given some of the struggles the conference has endured on the national stage over the past few seasons there are at least a handful of teams that have ambitions of crashing the conversation in 2019. First impressions are important so getting out of the gate with a strong showing by all 12 teams would be helpful in that pursuit. The festivities get started a week early with Arizona traveling to Hawai’i this Saturday with the rest of the slate getting underway next week. For these purposes both weekends are combined for our “Week One” look at the games ahead.

Back in the day a trip to the Islands almost always meant you either got beat or you were lucky you didn’t get beat… the temptations of the beach and tourist amenities served to provide the Rainbow Warriors with a decided home field advantage. Those days are mostly gone as the program has struggled over the past decade so the Wildcats come in as a decided favorite. Still – in Kevin Sumlin’s first year at the helm Arizona mostly under-impressed with quarterback Khalil Tate finding the transition to Sumlin’s offense stymied his ability to make plays on the fly. Supposedly the Wildcats will be featuring more of Tate’s athleticism in their offensive playbook this year but they won’t have to delve too far into the X’s and O’s to head back to Tucson with a 34-13 win.

Thursday, August 29
UCLA @ Cincinnati
The second year of the Chipster might be the most interesting of the scenarios to follow this year. Notoriously cavalier about recruiting the Bruins haven’t found themselves battling cross town rival USC for the area’s top recruits as was the case back in the hay day of the two Los Angeles programs. Kelly’s attitude seems to be that the kids that want to come to UCLA will come and he will coach them up but he’s not going to go full Glenngary Glen Ross to attract a roster full of five star recruits.           Given the inability of USC to do anything with their recruits over the past decade, Kelly’s approach may well work. Whatever the season ahead holds, the Bearcats will present a significant challenge in that UCLA has enjoyed little success on the road recently and lost to Cincinnati in the 2018 opener. Favored by a field goal or a bit more, Kelly has a few new tricks up his sleeve that will lift UCLA to the 33-28 win.

Kent State @ Arizona State
Although Arizona State has perhaps more questions to address than any team not named Colorado, this is a blow out from the opening kick-off. Sun Devils 43-16

Utah @ BYU
The Holy War has always been an entertaining rivalry from the days the two teams were both members of the Mountain West Conference. That ended when the Utes joined the Pac-12 in 2010 and the game disappeared from the calendar for a couple of seasons as the teams had to wait for non-conference dates to open up. This renewal shouldn’t be much of a contest as the Cougars have struggled of late and Utah is expected to contend for the Pac-12 South title. With an experienced offense and head coach Kyle Whittingham’s famous emphasis on fast, physical defense the Utes come away with the win, handily. 37-17

Friday, August 30
Colorado State vs. Colorado
The Buffs are favored by more than a touchdown in their annual season opener against the Colorado State. The Rams will be fielding a team of youngsters and while Colorado lost six straight games to close out the 2018 campaign prompting the firing of Mike MacIntyre, new head coach Mel Tucker at least has an experienced roster. That alone probably isn’t enough to change the fortunes of the Buffaloes in conference play but it should be enough for them to eke out a neutral site win at Broncos Stadium in Denver. Buff 28-24

Oklahoma State @ Oregon State
Both teams are question marks across the board. Certainly the visiting Cowboys have enjoyed more recent success than have the Benny’s but the shine has come off the bloom a bit in the past couple of seasons in Stillwater. The Beavers on the other hand open the schedule with an experienced hand at quarterback in Jake Luton and a running attack led by sophomore Jamar Jefferson, a combo that second year coach Jonathan Smith expects to be able to put a lot of points on the board. They will need to… Oregon State’s defense last season was historically awful and while reports from fall camp indicate improvement on that side of the ball it will be a long haul. But still – in a home opener and with the adrenaline pumping, one or two defense stops might be all the Beavs would need for the upset. The Cowboys are better than two touchdown favorites but if a flyer is to be taken on the Benny’s take it early before the attrition of the conference season takes its toll. Home team 31- the other team in orange and black 28

Saturday, August 31
Eastern Washington @ Washington
Yes Eastern Washington knocked of WSU a couple years back in one of these payday games and the chance to upend the Huskies on Montlake would be a cause célèbre` for years to come should the Eagles find a way to pull it off. Offensively, the Huskies do have questions to address and if the game turns into a shoot-out it definitely favors the visitors. But Washington head coach Chris Petersen does have the makings of another stellar defense so the likelihood of Eastern Washington lighting up the scoreboard is not high. Huskies by 15, 36-21.

Northwestern @ Stanford
The Cardinal are perhaps the biggest question mark in the Pac-12 North this season. Talent returns at quarterback in K.J. Costello but running back Bryce Love has graduated after an injury diminished 2018 and wide receiver J.J. Arcega-Whiteside is with the Philadelphia Eagles in the NFL. With those two weapons no longer in his arsenal, head coach David Shaw will retool along the lines of every Stanford team he’s coached in the past… a big, physical line and a lot of double tight end sets. It’s a formula that has worked well on the Farm and its good enough for a 35-14 opening victory over the Wildcats.

UC Davis @ California
Ex-Oregon Duck Justin Wilcox has assembled a formidable defense in Berkeley but the questions on the other side of scrimmage remain significant. When the biggest issue to address is at quarterback it could be a harbinger for a long tough year. That may not be the case for the Bears. In his second recruiting class Wilcox was able to restock the cupboard to some extent but it will be a process of evolution to get California on track offensively. Those concerns can wait until week two at least with the Bears a heavy favorite to hold serve at home against the Aggies of UC Davis. Pac-12 31 – Big Sky 10

Oregon vs. Auburn
A rematch of the national championship game of 2010-11 has two teams both hoping to return to those heights in 2019. Not to repeat the point, but when your biggest question on offense begins at quarterback it might be that you will have some lumps to take before things get ironed out. That will be less the case for Auburn head coach Gus Malzahn than it is for Wilcox as the Tigers will be trotting out a five star true freshman to open against the Ducks. That surely serves to Oregon’s advantage and expect new defensive coordinator Andy Avalos to do everything in his power to disguise his coverages and to blitz the kid from every angle. The key to game however will be more on Oregon’s side of the offense and can Justin Wilcox navigate a game plan in the face of one of the best defensive front four combos in the nation. Big, stong and fast, they will be a handful for the Ducks experienced offensive line. If they can hold the line of scrimmage, Herbert will get a chance to pick apart a suspect secondary. The thought here is head coach Mario Cristobal has a full awareness of what a win would do for his program and given his involvement in the day-to-day coaching of the big uglies up front it will be a point of pride for both teacher and student to do just that. Oregon 37-17

New Mexico State @ Washington State
Torchdown on the Palouse. The Cougs have a lot of talent returning but must again break in a transfer quarterback in Gabe Gubrud or Anthony Gordon a red-shirt senior with a limited number of game snaps in Mike Leach’s Air-Raid attack. Both will probably get plenty of playing time in this 48-15 thrashing of the Aggies, offering Leach the luxury of delaying that decision for another week.

Fresno State @ USC
The Trojans are nearly two touchdown favorites but that doesn’t fly. Jeff Tedford has rebuilt the Bulldogs into a three-time West division champion, sharing the favorite role with Mountain division favorite Boise State, the team Fresno State defeated last year for the Mountain West conference title. USC’s problems run deep – from the administration to the yardmarkers it seems. Head coach Clay Helton tried to jumpstart the Trojans back to life by retooling his offense and looked first to Air Raid savant Kliff Kingsbury to bring some lethality to what had become a very moribund offense despite the constellation of 5-star athletes in the huddle. Kingsbury took a job with the Arizona Cardinal of the NFL instead, leaving Helton to scramble to fill the vacancy. Enter Graham Harrell – another Air Raid practitioner as the new offensive coordinator. Will it help? Maybe… if Harrell can get the Trojans to score points in bunches they would surely be a handful and more for the rest of the conference. That’s an awfully big “if” and the moment and there is nothing the Bulldogs would like better than to slap down the mighty Men of Troy on their home field. Fresno State 31 – USC 27