Out of the Pac – Week Four

HomeFeaturedOut of the Pac – Week Four 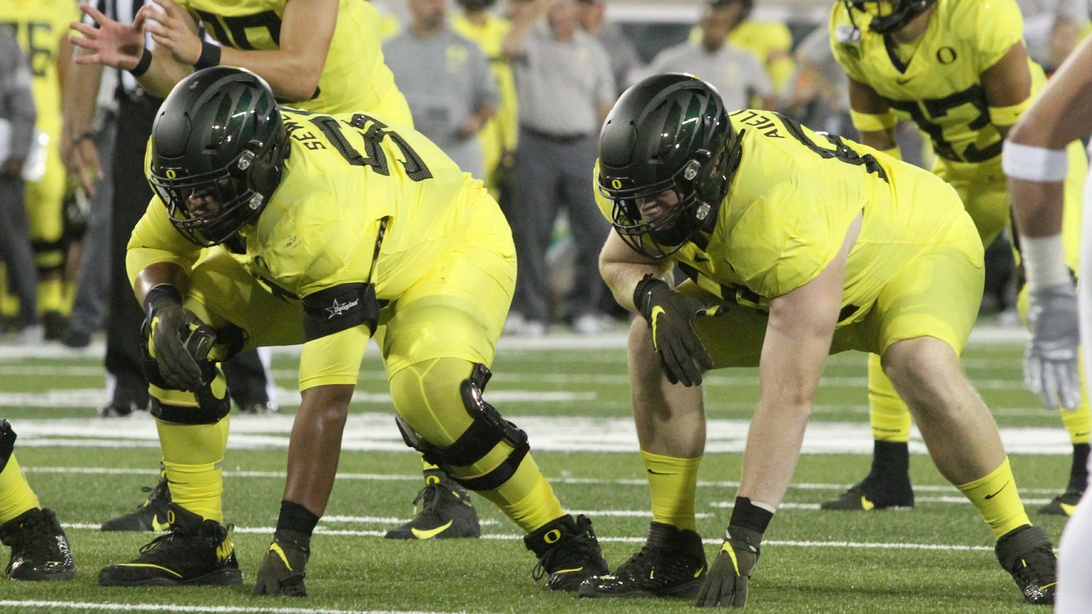 Out of the Pac – Week Four 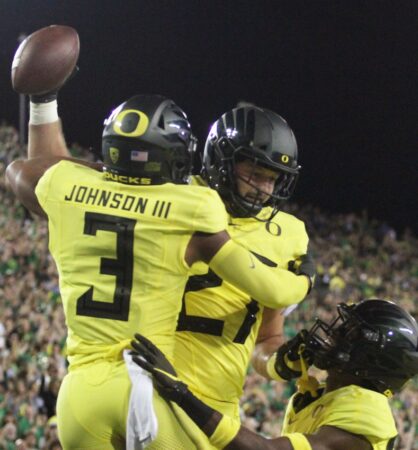 Seven on the mark, five not so much with the darts brings the season mark to 22-12 three weeks into the 2019 college football season. Week four has Oregon State and Arizona with a bye, Washington and California play out of the conference while the rest of the league heads into Pac-12 play with USC and Utah starting things off on Friday night in LaLa Land. First, a recap of last week’s match-ups.

Friday, September 13
Washington State 31- Houston 24 (pick: WSU 38-35)
Trailing 14-7 at the half, head coach Mike Leach and the Washington State Cougars found some offensive traction in the second stanza to hold off the home town Houston Cougars. Anthony Gordon completed 36 of 48 passes for 440 yards and three touchdowns but the ground game was limited to 49 net yards on 19 carries.

Saturday, September 14
Air Force 30 – Colorado 23 (pick: Colorado 33-21)
Colorado opened up a 10 to zip lead halfway through the first quarter only to watch their defense cough up 23 straight points to the Falcons of the Air Force Academy. A late rally brought the Buffs even at 23 each with 0:28 left in the game only to see the Flyboys come away with the victory, scoring on their first play from scrimmage in overtime, then holding Colorado on downs to end the game.

UCF 45 – Stanford 27 (pick: Stanford 36-33)
The Cardinal defense didn’t get off the plane until the start of the second half and by that time the Knights of UCF had a 38-7 lead. While the Stanford offense did show some signs of life in the second half, defensively the Cardinal are in disarray, allowing 90 points in their last two outings.

BYU 30 – USC 27 (OT) (pick: USC 38-21)
In his first collegiate start, Kedon Slovis looked like a fifth year senior slicing and dicing the Stanford secondary like a Ron Popeil Veg-A-Matic. Not so much in his first road action… a 30-27 loss to the Cougars in Provo, going 24 of 34 with a pair of touchdowns that was offset by three interceptions, including the one that ended the overtime session and sent the home town fans charging onto the field.

Arizona State 10 – Michigan State 7 (pick: Michigan State 31-18)
Hard to imagine how an officiating crew could miss the flagrant infraction when an ASU defender ran and leapt over the line of scrimmage in an attempt to block a Michigan State field goal that would have sent this defensive struggle to an overtime session. It’s equally hard to imagine how the Spartans could have lined up with 12 men on the field for a previous attempt that forced Michigan State to retake the try. The Sun Devils took the lead with 50 seconds remaining on Eno Benjamin’s 1-yard score.

Utah 31 – Idaho State 0 (pick: Utah 55-10)
Utah quarterback Tyler Huntley and running back Zach Moss continue to be the one-two punch for the Utes. Against the Big Sky Bengals, Huntley completed 15 of 19 pass attempts for 282 yards and three scores while Moss picked up 106 yards and a touchdown on 10 carries.

California 23 – North Texas 17 (pick: California 44-24)
Offense hasn’t been a strength of the Bears so far in 2019; it has been head coach Justin Wilcox’s defense that has California sporting an unblemished record at 3-0 including their week two upset of the Washington Huskies in Seattle. In their return to Strawberry Canyon, the Bears took advantage of a first half North Texas fumble and an opening drive touchdown to jump to a 20-3 lead at the break. But from there it was a struggle with the Mean Green outscoring the home team 14-3 after the half as the California offense continued to meander. Chase Garbers completed only nine of 22 attempts for 129 yards and one touchdown and the Bears were limited to 278 total yards of offense.

Oregon State 45 – Cal Poly 7 (pick: Oregon State 41-24)
Saturday afternoon at Reser went about as well as one could have hoped for the Benny’s after a tough loss in the Islands a week before. Oregon State came out hot on offense, scoring 38 first half points to end any suspense early. Jake Lutton completed 17 of 22 for 255 yards and four touchdowns to lead the offensive onslaught.

Washington 52 – Hawai’i 20 (pick: Washington 37-27)
Much like the Beavers, Washington took the game in hand early, scoring 38 first half points and coasting to the victory on the shores of Montlake. Jacob Eason threw for three touchdowns after being mostly stymied by California the week before and Husky head coach Chris Petersen has to be pleased with a defense that held a potent Rainbow Warrior offensive attack to less than three touchdowns.

Oklahoma 48 – UCLA 14 (pick: Oklahoma 47-18)
The Sooners took a 34-7 lead on the Chipsters in the first two quarters and were never threatened by the Bruins. Jalen Hurst led Oklahoma with 289 yards and three touchdowns through the air and added 150 yards and a score on the ground.

Arizona 28 – Texas Tech 14 (pick: Texas Tech 55-32)
Overtime for the stats crew, Arizona and Texas Tech combined for 910 total yards of offense with the Red Raiders torching the Wildcat defense through the air for 307 yards while the Arizona ground game chalked up 314 net yards rushing, including a team leading 129 yards by quarterback Khalil Tate. Still it took a 15 point fourth quarter for the Wildcats to rally to the home field win.

Oregon 35 – Montana 3 (pick: Oregon 63-13)
One week after posting double-sevens on the scoreboard against Nevada, the Ducks ran into a feisty Montana team that had better success at keeping Oregon out of the end zone, but no better luck at stopping quarterback Justin Herbert. The senior completed 30 of 42 attempts for 316 yards and for the second week in a row was credited with five scoring tosses. A committee of running backs and receivers contributed to the Ducks rolling up 560 yards of total offense and for the second straight outing, the Oregon defense didn’t allow an opposition touchdown, holding the Grizzlies to eight yards rushing and 242 total yards of offense.

Friday, September 20
Utah @ USC
It is possible the southern division championship will be determined in week four in the Coliseum. In three non-conference outings, the Utes have looked the part of a preseason favorite in the division. In addition to head coach Kyle Whittingham’s usual emphasis on physical defense the 2019 Utes feature an offense that has matured and is averaging better than 10 yards per completion through the air and better than five yards a carry on the ground. That’s how you move the chains, that’s how you keep the opposition from putting points on the board and that’s how you improve to 4-0 with a 37-28 win in the Coliseum.

Saturday, September 21
Washington @ BYU
A trap game in the making for the Huskies. After knocking off USC last week, there is nothing more BYU would like than to make it two in a row over the conference of champions. And it could happen if the Husky offense struggles as they did against California in week two. Washington righted the ship a bit offensively against Hawaii and will need to carry that momentum into Provo to come away with a 34-23 win.

UCLA @ Washington State
UCLA can’t score points and UCLA can’t stop the opposition from scoring points and that’s the recipe for a 48-21 Cougar win in the Palouse.

California @ Ole Miss
Ranked #23, the Bears are in position to salvage some respect for the Pac-12 after a rocky result to the non-conference slate. The Rebels are favored by 2.5 and with California’s offensive challenges it isn’t beyond the realm of possibility the contest could be low scoring and decided by a late field goal. But the pick is that it will be the Bears on the plus side of that narrow margin…. 27-25

Colorado @ Arizona State
From an experience and statistical point of view the Buffs should have the upper hand here. Colorado quarterback Steven Montez and running back Alex Fontenot have at times given the Buffs a dual-threat offensive attack that has Colorado out in front of expectations with two wins and a loss heading into conference play. ASU on the other hand has been inconsistent offensively/ After putting up 30 points against mid-major Kent State, the Sun Devils weren’t able to match that total in their next two games, scoring 19 against FCS Sacramento State and then ten points against Michigan State a week ago. That leaves it up to the defense which has allowed only one touchdown in each of ASU’s three wins and it will be the defense that leads the Sun Devils to the 18-13 home victory.

Oregon @ Stanford
Pity poor Stanford. After being shellacked by USC to open conference play, the Cardinal had to fly across the country to serve as UCF’s punching bag and then fly all the way back to Palo Alto to host the Ducks. Yes, cross country travel is easier when you charter, but it is still a six hour flight each way and the guess is that the Cardinal didn’t get over the jet lag until Thursday. Stanford head coach David Shaw is dangerous when he and his team are pushed into a corner and against the Ducks that will absolutely be the case… an 0-2 start to the conference race almost certainly eliminates the Cardinal from the northern division race, but that’s the result. Oregon 42-21