Out of the Pac – Week Eight

HomeFeaturedOut of the Pac – Week Eight 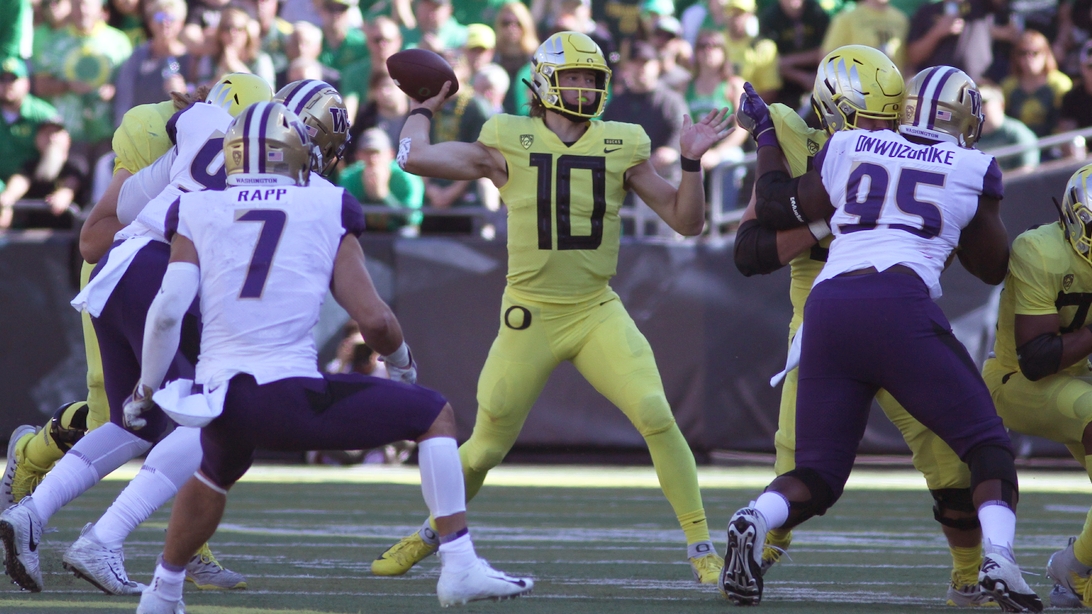 Out of the Pac – Week Eight

Four to the good and one Arizona second half brain cramp in last week’s rodeo to put the season tally at 35-19. A full slate of conference games await with UCLA and Stanford starting things off Thursday on The Farm. First up is our recap of week seven.

Saturday, October 12
Washington 51 – Arizona 27 (pick: Arizona 34-24)
Arizona led 17-13 at the half then gave up 38 second half points as the Wildcats – and in particular quarterback Khalil Tate – absolutely imploded after the break. Three lost fumbles didn’t help the Arizona cause and a porous defense yielded 450 yards of total offense and three rushing touchdowns to Washington running back Salvon Ahmed. Quarterback Jacob Eason completed 15 of 22 for 243 yards and a pair of scores.

Utah 52 – Oregon State 7 (pick: Utah 44-28)
Some were calling this a couple of steps backward for the Benny’s but that’s sugar coating it… Oregon State was overmatched at every position on the field and the final margin is fairly indicative of how far the road back will be for Oregon State.

Arizona State 38 – Washington State 34 (pick: ASU 38-25)
Freshman quarterback Jayden Daniels completed 26 of 36 pass attempts for 363 yard and three touchdowns and running back Eno Benjamin gained 137 yards on 19 carries as the Sun Devils rolled up 532 yards of offense against the Cougars. The loss was the third straight for Washington State after opening the season as a favorite for the northern division title and winning their three non-conference matchups.

Notre Dame 30 – USC 27 (pick: Notre Dame 33-31)
Seventeen unanswered second quarter points ended up providing just enough of a cushion for the Irish to hold of USC for their third straight win in the rivalry. Notre Dame running back Tony Jones Jr. logged a career high 176 yards rushing and the Irish iced the victory with a 14-play, 75-yard drive capped by Ian Book’s quarterback keeper for what proved to be the game winning touchdown with 3:33 remaining in the game.

Thursday, October 17
UCLA @ Stanford
The Bruins aren’t as bad as their record may indicate but progress in Westwood won’t come quickly for Chip Kelly. Other than quarterback Dorian Thompson-Robinson, UCLA is mostly bereft of Pac-12 caliber talent. Stanford isn’t. Cardinal 34-17.

Saturday, October 19
Oregon @ Washington
The Huskies have been a Jekyll and Hyde outfit this season… struggling frequently on offense and getting beat by the likes of Stanford and California yet putting the pieces together well enough to knock off USC at home then thrashing Arizona last week in Tucson. Payback for the overtime loss to the Ducks last year in Autzen is certainly powerful motivation but so too is the need for the Huskies to narrow Oregon’s two game lead in the northern division standings. With a blustery day expected on the shores of Lake Washington the cross border rivals will square off for the 111th time and this throwdown looks to be one that will be footnoted in the archives whatever the score. Washington owns the series advantage 60-46-5 but that gap narrows by one as Oregon puts together its best game of the season on both sides of the ball, 32-17.

Arizona State @ Utah
Jayden Daniels can give a defense fits but the true freshman quarterback has yet to see a defense as big and as mobile as the unit Kyle Whittingham and the Utah Utes will run out on the field in Salt Lake City. It was fun while it lasted in Tempe, but any Sun Devil notions of a southern division title vanish without a trace into the thin Wassatch Mountain air. Utah 44-23

Colorado @ Washington State
Home field advantage is the decisive factor in a matchup between two teams that are reeling after having early season success. Colorado has lost three of its last four while the Cougars are on a three game slide. The Buffalo secondary was taken behind the woodshed in the loss to Oregon and more of the same is likely against a WSU offense that will put the ball in the air nearly 53 times a game. Cougs 42-35

Arizona @ USC
Playing 9th-ranked Notre Dame to within a field goal in South Bend won’t win head coach Clay Helton many accolades but it must be noted the Trojans gave the Irish everything they could handle and easily could have escaped with the upset. Would that have been enough to keep the “fire Helton” faction quiet? Probably not. A convincing win over the indecipherable Arizona Wildcats probably won’t do the trick either but unless quarterback Khalil Tate and the Arizona defense begin to play at something approaching a FCS brand of football, that’s what will happen. USC 44-28

Oregon State @ California
This will be a tough matchup for Oregon State with a struggling California offense facing an 11-man sieve of a Beaver defense in Strawberry Canyon. While the Bears won’t pound on the Bennys quite the way Utah did a week ago, expect California to keep Oregon State quarterback Jake Luton mostly under wraps and to run the ball down the Beavers throat. Cal 31-17.