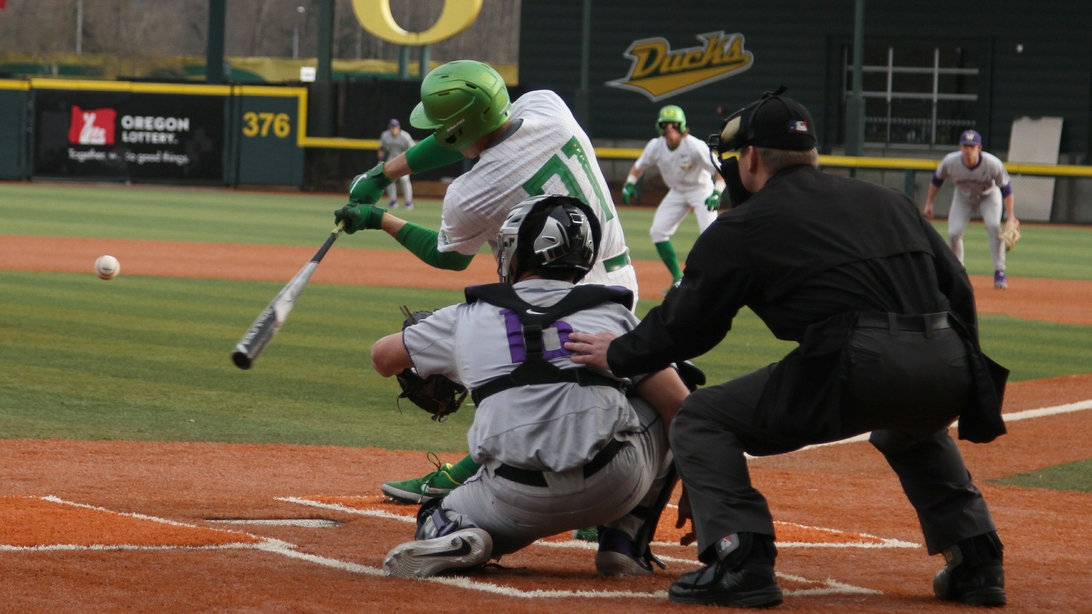 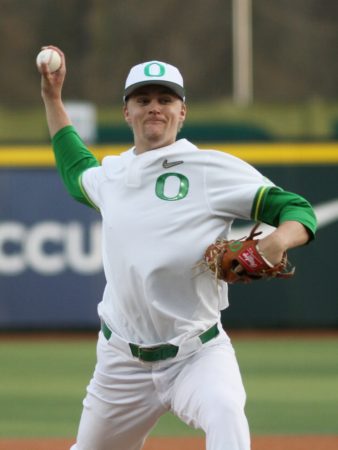 Spring made a grand entrance in more ways than one to the Willamette Valley over the past few days only to see the Washington Huskies spoil the vibe by taking two games of three in the Pac-12 opening series for the two northwest rivals.

Harshing the buzz of our reintroduction to sunshine and a spectacular run through the conference tournament by the men’s basketball team, the hometown nine ended up on the really short end of the series dropping the game one 9-3 on Friday and following that up with a 19-3 shellacking on Saturday.

Perhaps inspired by the rout Pritchard and Co. laid on the Huskies in Las Vegas Saturday night, Oregon salvaged the finale 1-0 in 10 innings on Sunday afternoon.

Cullen Kafka (2-1) scuffled for the Ducks in the opener, allowing seven runs on 11 hits in 4.2 innings of work. Washington opened the scoring with a pair in the second but Oregon got one back in the home half.

In the third Jakob Goldfarb and Aaron Savila each singled home a run to give Kafka a 3-2 lead. It didn’t last long.

A pair of throwing errors and a long ball by Husky right fielder Connor Blair turned the tide completely against the Ducks in a five run fifth. Two insurance runs in the sixth closed out the scoring.

Things only got worse for the Ducks on Saturday. Again the Ducks were victimized by the big inning with the Huskies putting up crooked numbers beginning with a five-run third and after Oregon answered with a three spot of their own, a three-run fifth then 10 more for good measure in the eighth and ninth.

With the official box score listing the weather as “freakin’amazing” Oregon found a way to handcuff the Washington bats in Sunday’s wrap up. Brett Walker scattered five hits but held the Huskies scoreless into the fourth when he was replaced by Ryne Nelson.

With a canon of an arm that came into the program primarily as a shortstop the junior righthander has made the transition to the pitching mound over the past two seasons. Sunday’s outing offered a glimpse of the wisdom of that move with Nelson fanning eight batters while yielding three hits in 5.2 scoreless innings of work.

Nico Tellache (2-1) walked a pair but got out of the 10th inning unscathed and was credited with the win when the Ducks pushed a run across in the bottom half on Jonny DeLuca’s walk off RBI, scoring Taylor Adams.

Adams kick started the inning with a one-out single and after Kyle Froemke struck out looking advanced to third on Tanner Smith’s single. Sam Novitske walked to load the bases bringing DeLuca to the plate. Two outs, three and two count with runners in motion, DeLuca lined a single in to avoid the series sweep.

Now 11-7 on the year and 1-2 in Pac-12 play, Oregon will host Arizona State for a three game set starting Friday, March 22 with the first pitch scheduled for 6:00 pm. Game two on Saturday will begin at 4:00 pm with a noon start for Sunday’s finale.