No Sabrina, No Ruthy, No Satou??? No Problem 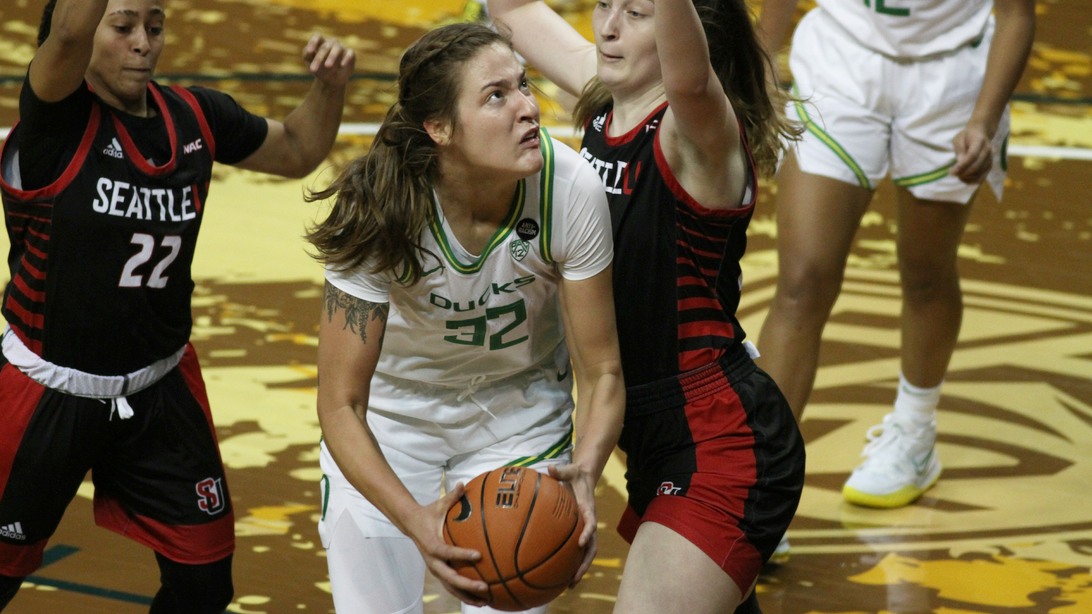 No Sabrina, No Ruthy, No Satou??? No Problem

The next chapter of Oregon women’s basketball finally got underway Saturday afternoon and if this initial outing was any indication, the Ducks are going to be just fine.

Nine players suited up for Oregon for the very first time, it didn’t miss a beat with a 116-51 win over Seattle inside Matthew Knight Arena. Due to Covid restrictions, no fans were allowed inside making for a very different atmosphere.

Taylor Mikesell, a sophomore transfer from Maryland, led the Ducks with 28 points thanks to 8-of-10 from three-point land. She nailed seven threes in the first half alone and it looked like she might challenge Jaz Shelley’s team record of 10 threes in a single game. Oregon cruised to a 71-25 halftime lead and it was academic from there.

“It was nice to see Taylor do what she did,” Head Coach Kelly Graves said. “She’s as good of a shooter as I’ve ever coached.”

Five Ducks scored in double figures, including Lydia Giomi’s first double-double of her career with 15 points and 13 rebounds. Also making her Oregon debut was 6-7 Sedona Prince and the big forward didn’t disappoint with 17 points and six rebounds. Taylor Chavez added 11 and Nyara Sabally ended a two-year wait as she finally got to play and opened up with 10 points and six boards.

“We’ll take 15 and 13 from her every night,” Graves said of Giomi’s performance. “Someone pointed out that was her first double-double, so that’s pretty neat. She’s done a great job for her entire career. She is the consummate pro.”

Oregon shot 53 percent from the field and 20-of-26 from the free-throw line.

Considering the new faces and the lack of practice time because of the pandemic, it’s amazing Oregon turned the ball over just three times. That number would have been great for any experienced team, but at one time, the Ducks had five true freshmen on the floor at once.

Having quality depth is always an advantage, but in the season of Covid, it’s going to be even more important.

“We’ll probably go with a deep bench for quite a while,” Graves said. “I don’t know what group is going to play better with each other. We just have too many moving parts. At some point during the Pac-12 season, we’ll start to tighten it up.”

Seattle might have been over matched from the opening tip, but point guard McKenzi Williams showed she definitely belonged with her 20 points to lead the Red Hawks.

With an actual game under their belt, the Ducks will be ready for tougher competition starting Monday when they travel to Portland to face the Pilots in the Chiles Center. Then the grueling 22-game conference schedule begins Friday, Dec. 4 when Colorado comes calling.