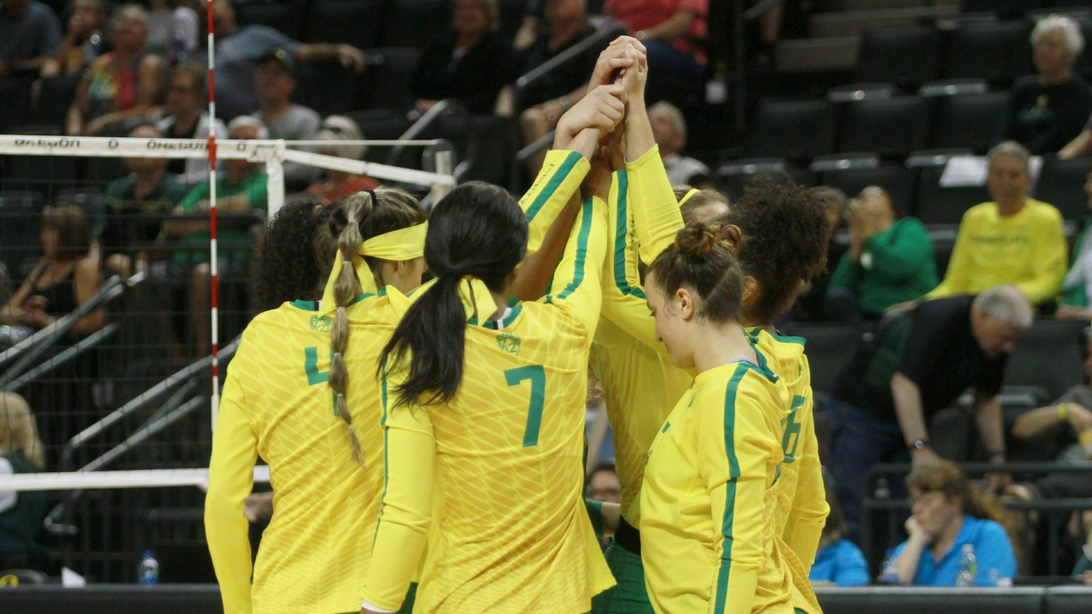 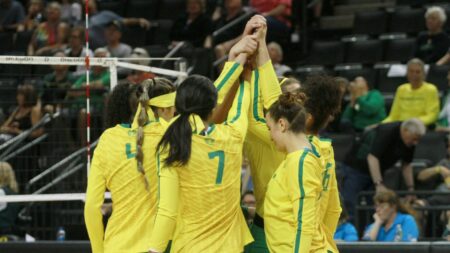 It will be a re-tooled roster that will open the 2019 volleyball season in Oregon head coach Matt Ulmer’s third season at the helm.

After taking the Ducks to the round of 32 in the NCAA tournament in his inaugural campaign, Ulmer and the Ducks followed up with a second place Pac-12 finish, posting an overall record of 23-11 (13-7 in conference play) and then closed out the year with a Cinderella type run to the Elite Eight in 2018, knocking off top-ranked Minnesota on its home floor in the process.

While the expectations for 2019 remain sky high, Ulmer will need to find replacements for a number of stalwarts who provided a nucleus for that recent run of success. Gone are outside hitter Lindsey VanDer Weide, setter August Raskie, as well as middle blockers Sumeet Gill and Lauren Page.

“Four really good non-freshmen and everybody else,” is how Ulmer sized up his roster. “They haven’t played a point in a full match yet. It’s been interesting.”

Outside hitters Willow Johnson and Taylor Borup along with middle blocker Ronika Stone are the only seniors on the team with one sophomore, three redshirt freshmen and seven – count ‘em using both hands – seven freshman who Ulmer is counting on to contribute early.

And with some justification. The 2019 recruiting class was ranked seventh nationally and includes outside hitter Taylor Williams, a local product of Churchill High. Bea Wetton, a defensive specialist, comes from just up the road, Liberty High of Hillsboro.

Three newcomers hail from the Golded State. Setter Elise Ferreira of Bakersfield is the daughter of Carl Ferreira who coached the Ducks four years beginning in 2000. Palisades Charter High alumni Alex Laita joins the Ducks as an outside hitter with Morgan Lewis of Carlsbad, Ca. signed on as a middle blocker/rightside hitter who racked up more than 1000 prep kills for LaCosta Canyon High.

Libero Georgia Murphy come to the Ducks from deepintheheata Woodlands, Texas is the top ranked libero in the 2019 cycle and was named Under-Armour All-America.

Redshirt freshmen middle blockers Karson Bacon  and Abby Hansen along with setter Kylie Robinson round out the 2019 edition.

Around the country most observers appear to believe Ulmer when he says the goals aren’t changed, voting the Ducks #11 in the pre-season AVCA poll and his coaching peers picked Oregon to finish third a loaded Pac-12 conference.

The season gets underway beginning Friday with Oregon Classic, a four team, two day tournament. Oregon’s first action has the Ducks squaring off against UC Irvine at 7:00 pm Friday at Matthew Knight Arena followed by a 6:00 pm match-up with Boston College.

Oregon State will play Boston College and UC-Irvine in a double-dip earlier on Friday (11:00 am & 5:00 pm) then UC-Irvine and Boston College will meet at 11:00 am on Saturday before the Terriers and the Ducks wrap things up.