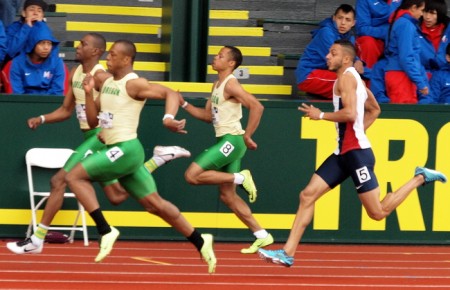 The Oregon men won 15 events and the women 16 as the Ducks swept the Arizona Wildcats in the 2014 Pepsi Dual Meet Saturday afternoon at Historic Hayward Field.

Neither the men nor the women were ever threatened by the Wildcats; the men out pointed the visitors from Tucson 144-47 and the women nearly matched that margin with a 106-52 victory.

The day’s featured match-up between Oregon’s Mac Fleet and six time NCAA champion Lawi Lalang lived up to its billing, with Fleet edging the Arizona senior by ¾ of a second, clocking in at 3:44.04.

Other highlights included Sam Crouser and sister Haley both winning their event for the Ducks, Sam taking the discus with a toss of 49.02m and Haley claiming the javelin title with a mark of 164’ 5”.

About the only disappointment for the Ducks was Laura Roesler’s close miss on her attempt to break the two minute mark in the 800m. On a cool day, Roesler ran away from the field for the first place points but came up just short of her goal, crossing the finish line in 2:01.10.

Two Oregon football players spent a day off from spring camp at Hayward and contributed to the lopsided victory. Devon Allen picked up a first in the 110 hurdles (13.96) and a third in the 400m hurdles (55.06) while teammate Dior Mathis claimed a third in the 100m (11.10).

Phyllis Francis scorched to a wind-aided 22.82 mark in the 200m and Chizoba Okodogbe held off a late Arizona challenger to take the 400m with a time of 53.43.