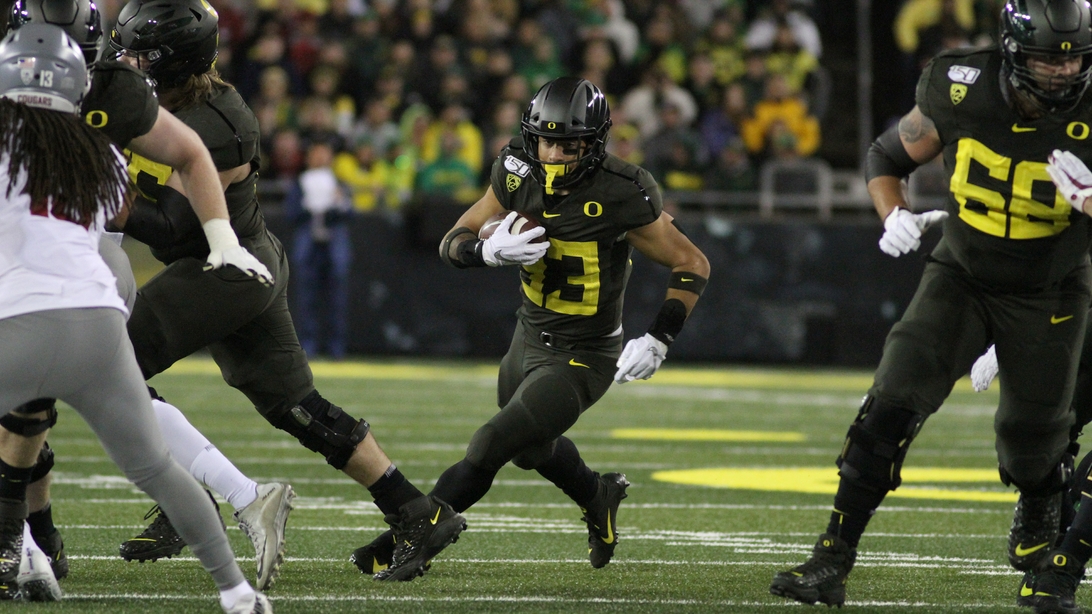 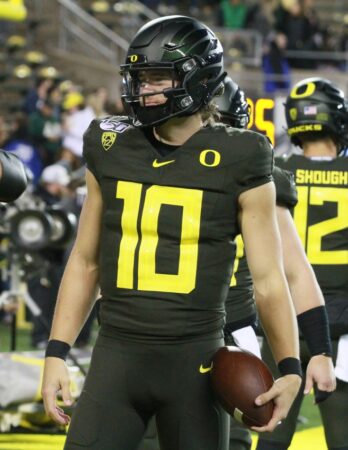 It might be just one of those seasons in Eugene.

After allowing a go-ahead touchdown with a minute left, Justin Herbert orchestrated his inner Joey Harrington to drive the Ducks down to the Washington State 8-yard line and then watched true freshman kicker Camden Lewis nail the biggest kick of his life.

“I was really proud of the team just for overcoming a lot during the course of the game,” Oregon coach Mario Cristobal said. “Some of it was self-inflicted, including myself. But just not flinching in that situation and working into reality some of the things we practice every single Wednesday.”

Oregon moved to 7-1 overall, 5-0 in conference play and will most definitely be a Top 10 team when the polls come out Sunday morning thanks to a couple upsets earlier in the day.

But being a Top 10 team was the last thing on the Ducks’ mind when Anthony Gordon converted a 4th-and-3 with a touchdown to Brandon Arconado to give the Cougars a 35-34 lead with 60 seconds to go.

The Ducks’ eventual game-winning drive was set up with a 36-yard kickoff return by Mychal Wright. That return gave Oregon a chance. Herbert took the ball with 52 seconds left and had two timeouts in his pocket, which proved to be crucial.

After a screen to CJ Verdell, who had the game of all games, Herbert found Spencer Webb for seven yards and a first down. On the next two plays, the Juwan Johnson everyone has been hearing about finally made his presence known.

The Penn State transfer caught a 15-yard pass and then a 24-yard reception where he broke a tackle and broke loose. He was run down on the WSU 9-yard line, but those two receptions were easily the biggest of his Duck career so far.

“For the past week and a half, and in particular the last week, has been practicing really, really well,” Cristobal said of his 6-5 receiver. “He’s been strong in snatching the ball out of the air and running really good routes.”

Verdell rushed for three to the six. Timeout. Then Oregon had Herbert run to the middle of the field on the Cougar eight. Cristobal waited until two seconds were left to call his last timeout, setting the stage for his true freshman.

It was a gutsy decision, especially considering Lewis had missed an extra point earlier in the first quarter. This was a 26-yarder right in between the hash marks. It was practically another extra point.

There would be no missing this one.

Lewis’ leg swung through and the ball sailed in between the goal posts and the Ducks could go home happy.

This game would never had got to that point of Lewis winning it at the buzzer if it wasn’t for an incredible performance from Verdell. The sophomore tailback rushed for a career-high 257 yards on 23 carries and three touchdowns.

That effort was much-needed as Herbert didn’t have his best game. He was 21-of-30 for 222 yards, but his 35-game streak of throwing at least one touchdown pass went by the boards. The completion percentage was there, but the senior signal caller never really got into a rhythm all night. Thankfully for the Ducks, Herbert’s best two throws came on that final drive.

Lewis gave the Ducks a six-point lead six minutes earlier at 34-28, but that drive stalled on two penalties the Ducks vehemently disputed. A false start was called and a possible pass interference that was not called gave Oregon a fourth down on the 13-yard line.

Both teams traded possessions, but then the Cougars found themselves with the ball with 3:11 remaining and 90 yards away from pay dirt.

Gordon showed why he’s a big time quarterback, driving his team the full 90 yards in just 2:11. At the time, it was the biggest drive of Washington State’s season and it was a minute away from its biggest win and make it five in a row against the Ducks.

Maybe they scored too quickly.

Washington State could have easily folded up the tent and go back to the Palouse after Verdell’s third touchdown that gave the Ducks a 31-20 lead with 13:20 left in the game. Instead, Gordon led the Cougars on a seven-play, 78-yard drive and converted a two-point conversion to pull within a field goal at 31-28.

Oregon and Washington State went into the locker room knotted at 17-17, but the two teams arrived at that point total in very different ways.

WSU opened the scoring going up 3-0 with a Blake Mazza 36-yard field goal. Camden Lewis matched that field goal with a 40-yarder of his own and that’s where the similarities end.

The Ducks took the lead with 1:15 left in the first quarter when Verdell rambled 89 yards for a touchdown. It was the longest touchdown run by an Oregon Duck since the 2012 Rose Bowl when De’Anthony Thomas sprinted down the sideline 95 yards against Wisconsin.

Unfortunately for Lewis, however, his extra point sailed wide right and the score was 9-3. That miss allowed the Cougars to take the lead six minutes later when Max Borghi completed a seven-play, 51-yard drive with a 1-yard score. Their extra point was good and WSU held a slim 10-9 advantage.

Oregon took the lead back thanks to the defense and Jevon Holland. The Cougars were backed up on heir own 5 and faced with a third-and-25. Gordon rushed a throw over the middle that Holland could step in front of and run 19 yard for the Pick-6. The Ducks decided not to mess with the extra point and instead relied on Herbert’s arm. He found Johnny Johnson III in the back of the end zone for the two points and the 17-10 lead.

It only took the Cougars 64 seconds to tie the game right back up though.

After a big kickoff return to the WSU 41 and a 21-yard pass, the Cougars were on the Oregon 38 just like that. Gordon seemingly completed a pass to the Duck 18, but after a 10-minute review that took nine minutes too long and an unsportsmanlike penalty on the Oregon bench, the Cougars had the ball on the 15 where they scored on the next play. Gordon found Renard Bell on a swing pass and the tailback ran into the end zone.

Somehow, some way, the Ducks will have to look towards next week with a huge contest in Los Angeles as they face the Trojans. Clay Helton’s team is coming off a comeback win at Colorado and is 5-3 overall, but 4-1 in the Pac-12 South.