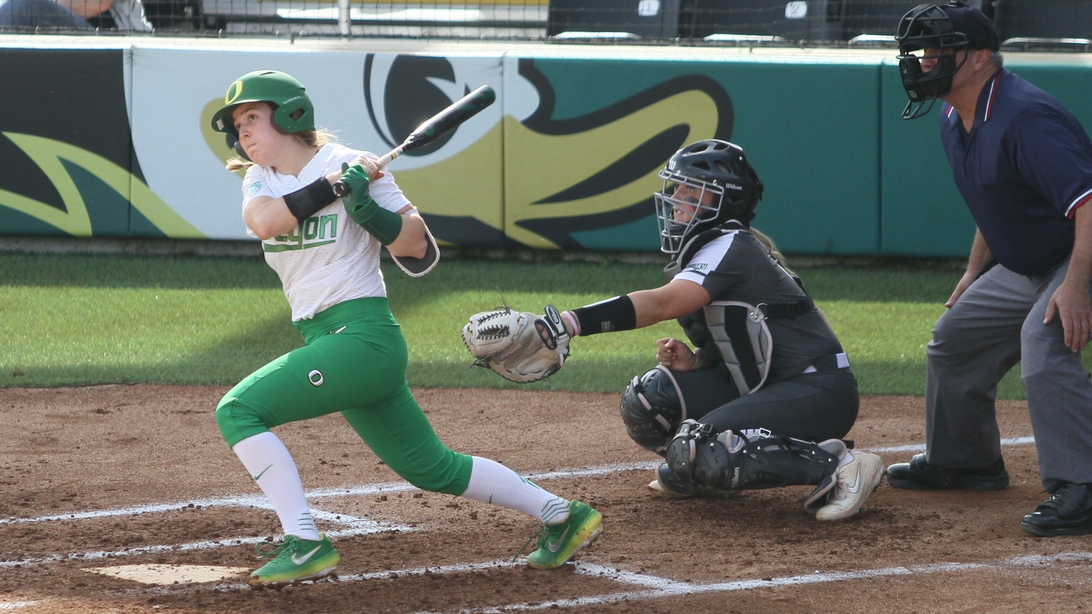 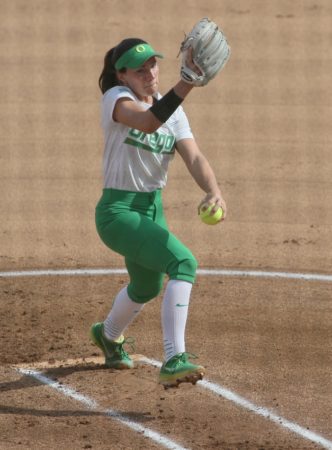 An improbable comeback capped by an inside the park homerun from Haley Cruse sparked the Oregon Ducks to a 9-8 victory over Portland State to complete a double-header sweep of the Vikings Tuesday afternoon at Jane Sanders Stadium.

The day was a struggle from the start for the Ducks.

Oregon pitcher Jordan Dail walked two, gave up a pair of base hits and was charged with a wild pitch and was fortunate to escape the first inning only trailing by two.

Her offense got her those two runs plus another in the home half. Haley Cruse led off with a single and advanced to second when Allee Bunker beat out a bouncer to shortstop but was thrown out attempting to steal third. After Jasmine Sievers worked a base on balls, hammered a 3-1 pitch over the left field fence for a 3-2 Oregon lead.

The Vikings came right back with a long ball of their own when 1B Ashley Doyle launched Dail’s first offering 20 feet over the center field wall to knot the score at three.

Once again the offense came to Dail’s rescue with their next at bats. Hannah Galey got things started with a walk and advanced to second on Lexi Wagner’s sacrifice bunt. Cruse took an 0-1 pitch up the middle for a single to drive Galey home with what proved to be the winning run.

Oregon added an insurance run in the fourth when Wagner led off with a walk and eventually scored on Siever’s double into left.

Dail (17-10)  made the two run lead hold up, getting the complete game victory holding the Vikings to three earned runs on ten hits while striking out seven and walking two.

With limited pitching options an ongoing story line for the Ducks this season, Dail opened game two in the circle for the Ducks and got out of the first inning unscathed stranding a Viking runner at third base.

After the offense gave her a 1-0 lead in the bottom of the first when Allee Bunker scored on a throwing error Dail wasn’t as fortunate in the second as the Viking struck for a five-spot. Two wild pitches, a hit batter and three base hits gave the Vikings a 5-1 advantage and forced Oregon head coach Melyssa Lombardi into inserting two positions players – third baseman Rachel Cid  and then centerfielder Haley Cruse – at pitcher to burn up innings.

Shaye Bowden’ third inning homer cut the Vikings’ lead to 5-2 but the Portland State tacked on three runs in top of the fourth to seemingly put the game out of reach.

But not quite. April Utecht single and scored on a Cruse single in the bottom of the fourth and then came the fifth.

With walk-on Kailey Krueger taking over in the circle, the West Linn freshman spun a 1-2-3, 10-pitch inning and the offense went right back to work.

Three walks, a couple of wild pitches and a pair home runs – a two-run jack from Cherish Burks and a three-run inside-the-park number by Cruse and suddenly the Ducks had the lead 9-8.

Oregon’s workhorse Dail returned to the circle and the lefthander tossed a 1-2-3 sixth then stranded two Vikings in the seventh to preserve the win.

It was the first collegiate win for Krueger (1-5) and improved Oregon’s season record to 21-22. With the non-conference schedule now complete the Ducks enter the stretch run of the Pac-12 race hoping to build momentum toward a post season berth and the next item on that agenda is a three game Civil War showdown against Oregon State beginning Friday, April 26th at 2:30 pm. Saturday’s game two is scheduled for 6:00 with Sunday’s finale set for a 5:00 pm start. All three games will be available on the Pac-12 Networks.