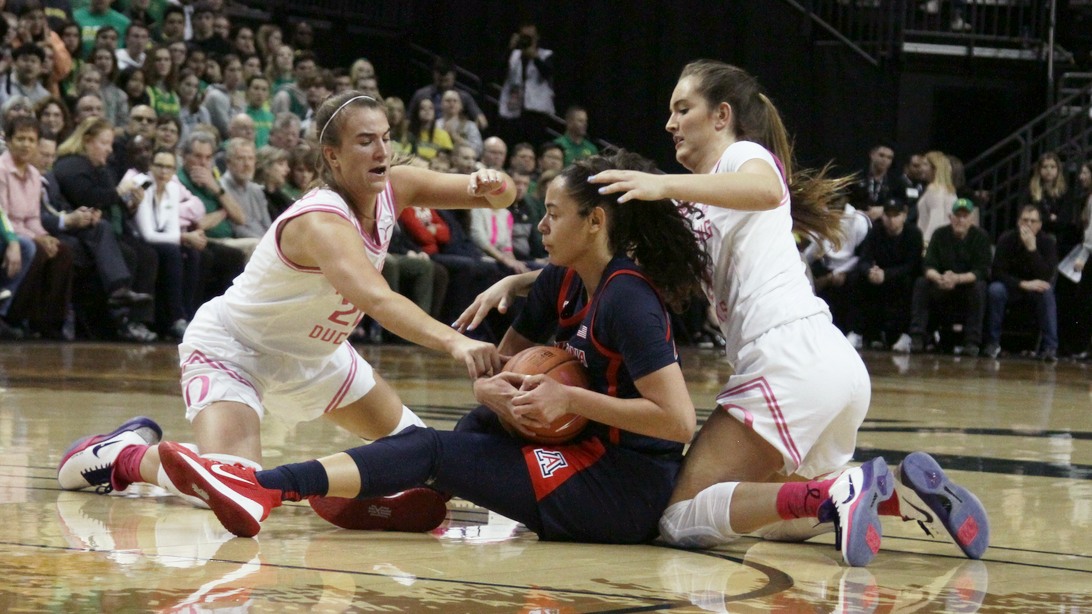 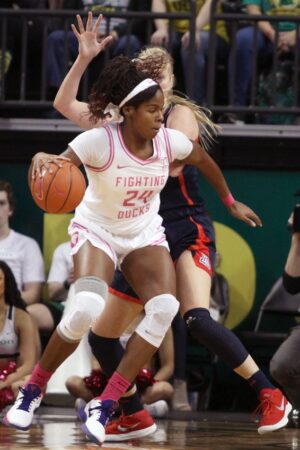 12th-ranked Arizona drilled a three ball 35 seconds into Friday’s match up with Oregon and the next time they scored it was six minutes later and the basket cut the Ducks lead to six at 11-5 and the die was cast.

After a three game cross country record setting road trip, the Wildcats ran into a buzz saw once Oregon reacquainted themselves with the surroundings at Matthew Knight Arena.

“The refs let us play,” said Oregon guard Sabrina Ionescu of the rugby match the two sides engaged in for the first two quarters. Oregon’s early lead held but by the middle of the second quarter the Wildcats sliced the margin to a bucket at 20-18 after forcing the Ducks into a stretch of four turnovers and a couple of missed shots.

Taylor Chavez’ broke free for a lay-up and Ionescu hit a jumper to stem the tide and then sandwiched a trey between a pair of three-balls from Satou Sabally to push Oregon’s lead to 17 at the break, 39-22.

Arizona (18-4, 7-4) simply had no answer for Ruthy Hebard in the third. The senior post converted a three point play to open the frame for the Ducks, then finished Oregon’s next three possessions at the rim and the romp was on.  By the end of the quarter Oregon led 72-38 and the starters hit the bench.

Hebard hit 10 of her 13 shots from the floor for a team leading 22 points on the night.

With a stat line of 15 points, 11 rebounds and 10 assists Ionescu notched her 24th career triple double – a number she admitted held special significance in light of the recent passing of Kobe Bryant. “I would probably be receiving a text at this time with him telling me something,  congratulating me … I hope I can just stay at 24 (Bryant’s jersey number for part of his career with the Lakers) for the rest of the year but I don’t know if that’s going to happen.”

Sabally’s 11 rebounds matched Ionesc for the team lead to go along with 17 points and six assists of her own.

Chavez put together one her best outings with 17 points and a couple of steals.

But for all the gaudy offensive numbers, once again it was the defense that head coach Kelly Graves pointed to as the key to Oregon’s inspired level of play over what is now nine straight wins.

“I thought defensively we were really on point,” said Graves. “We made some turnovers and struggled a little bit offensively but still had an eight-point lead going into the second quarter mainly because of our defense and we kind of took off from there.”

Oregon’s defense turned 19 Arizona turnovers into 24 points and allowed only two offense rebounds while clobbering the Wildcats on the boards 40-24 overall.  The Ducks shot 49.2% from the floor, making 32 of 65 attempts while holding the Wildcats to 23 of 52, 44.2%

The win improves Oregon’s season record to 21-2, 10-1 in Pac-12 play. Next up the Ducks look to avenge their only conference loss when they host Arizona State on Sunday at 2:00 pm.

“Sabrina will have them (her teammates) ready to play,” said Graves of the rematch.  Pac-12 Networks will provide coverage.