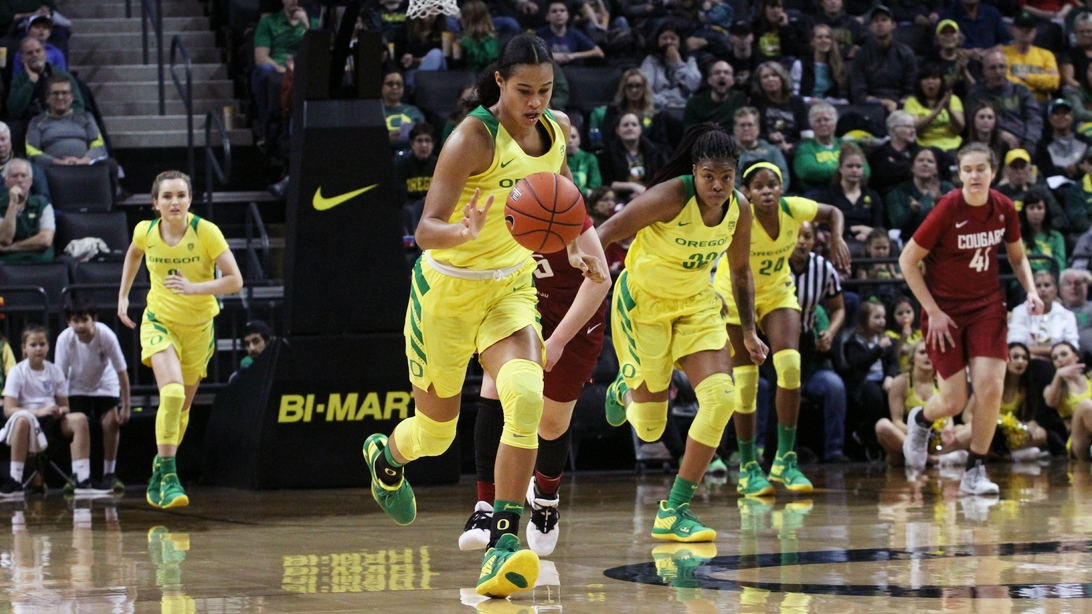 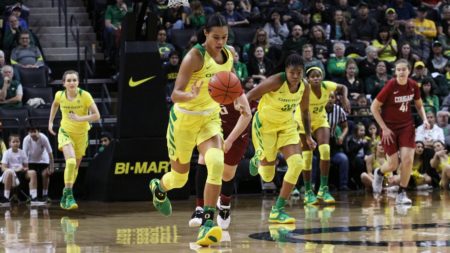 Washington State was no match for Oregon’s balanced attack in the Ducks’ 98-58 romp over the Cougars Sunday afternoon at Matthew Knight Arena.

Ruthy Hebard scored a career high 34 points and Sabrina Ionescu extended her NCAA triple-double record to 15 as the Ducks completed a weekend sweep of the Washington schools to begin their Pac-10 conference title defense.

After a methodical if unimpressive win over Washington on Friday, Oregon head coach Kelly Graves was pleased with the way his team took control of the game early and never let up.

“We were crisper, we were more aggressive. I think Ruthy tonight, she just had a match-up advantage and she took advantage of it,” he said.

Oregon jumped to a 25-17 lead after one period then buried the Cougars with forced turnovers and transition buckets to take a twenty point lead into half at 49-29.

It was second verse same as the first after the break with Ionescu and Hebard working the pick and roll repeatedly and Satou Sabally torching the Cougars both from the outside and on the dribble on her way to a 25 point, seven rebound outing.

“Satou continues to mature right before our eyes,” said Graves. “She’s a unicorn … it’s incredible. When she’s aggressive like that she just becomes so difficult to defend.”

The Ducks shot 56.9% from the field on 41 of 72 while holding Washington State to 22 of 57 (38.6%) and clobbered the Cougars 45 to 26 on the boards. Eighteen offensive rebounds helped Oregon fashion a 62-30 advantage in points in the paint while defensively the Ducks converted 18 WSU turnovers into 21 points.

Individually, Hebard connected on 16 of 21 shots from the floor and could have broke the 40 point barrier had she shot better than two for ten from the charity stripe. Ionescu’s line was 17 points, 12 rebounds and ten assists while Sabally hit nine of nineteen shots while logging a team high 34 minutes of court time.

Up next for the Ducks is the SoCal road trip with Oregon facing USC on Friday at 8:00 pm before tangling with UCLA on Sunday at 2:00 pm. Both games will be televised by the Pac-12 Networks. Oregon returns to Matthew Knight Arena to host Arizona State on Friday, January 18th with the opening tip set for 6:00 pm.