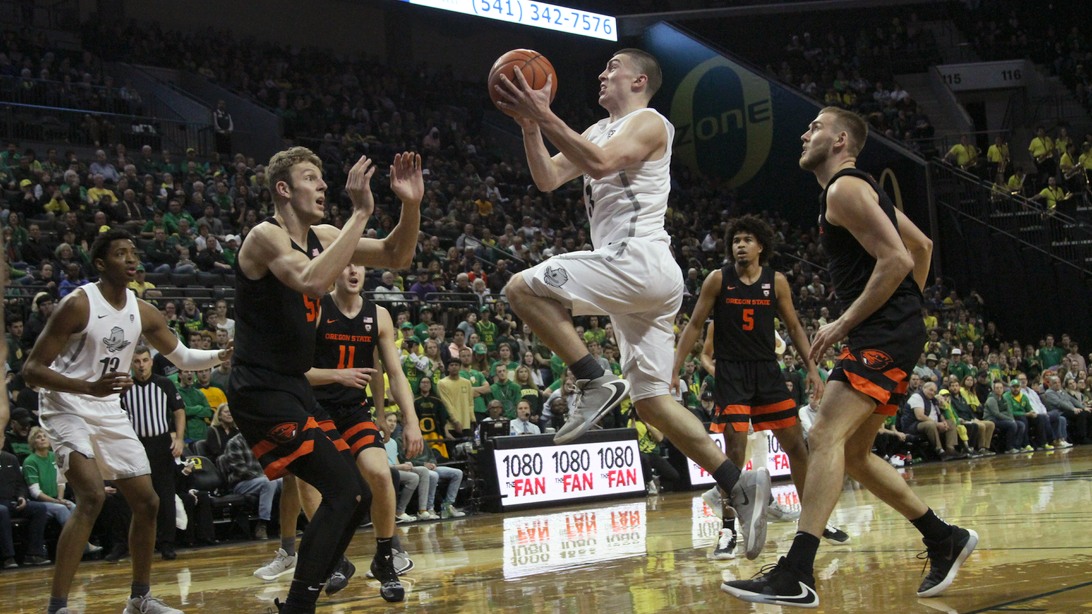 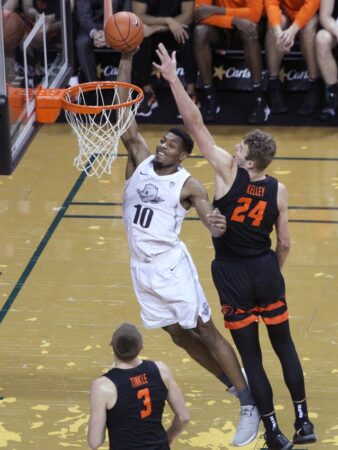 Could this night have gone any better for the Ducks?

First, they defeat Oregon State 69-52 in front of a packed house inside Matthew Knight Arena to end their three-game losing streak in the Civil War.

Second, Colorado, Arizona and Arizona State all go down and propel Oregon to the top of the standings at 11-5 in Pac-12 play. UCLA, with its win over ASU, is also 11-5, but the Ducks hold the tiebreaker over the Bruins.

Third, with a sweep over the Bay Area schools next week, Oregon is Pac-12 champs.

But those other conference outcomes wouldn’t matter a whole lot if the Ducks didn’t take care of business against the Beavers.

After a close first half where Oregon led just 29-25, the Ducks made some defensive adjustments and completely shut down OSU’s offense to outscore the Beavers 40-29 in the second half.

Payton Pritchard, of course, led all scorers with 23 points on 9-of-18 from the field and 5-of-9 from long range. Will Richardson added 15 and Anthony Mathis poured in 13.

In order for the Ducks to success the rest of the year, it’s going to be important for those so-called role players to step up and give Pritchard help. Especially now since it was announced today that their second-leading scorer, Chris Duarte, had surgery on his pinkie finger on his shooting hand and will be out indefinitely.

Mathis took Duarte’s spot in the starting lineup and was 5-of-10 shooting, including 3-of-7 from three-point land.

Oregon wasn’t especially great on offense, but it didn’t need to be as the Ducks’ defense was on point. Coach Dana Altman was determined not to let Stephen Thompson beat his team. In the first half, the senior guard scored 11, but in the second half, he was double-teamed whenever he had the ball and Thompson only scored four more points.

In fact, until Sean Miller-Moore scored a hoop in garbage time, only four Beavers scored. Tres Tinkle added 14, Zach Reichle with 11 and Kylor Kelley poured in 10. That was it.

Oregon also forced 15 Beaver turnovers while committing just four itself. The Ducks scored 15 points off of those OSU miscues.

The Ducks weren’t done, however.

Oregon eventually turned it into a 21-4 run in the first 8:30 of the second half for the 51-28 lead and the game. Oregon State never recovered.

Now Oregon has control of its own destiny, something they probably didn’t think they would get again after last week’s loss at Arizona State. But after an overtime win at Arizona and now the Civil War, the Ducks need two home wins to claim the conference championship.

Oregon is 15-0 at Matthew Knight Arena and one has to think the Ducks will finish the job, but it won’t be easy. Cal just showed it can hang with the big boys with its upset over Colorado and Stanford always has a win over the Ducks.

Cal is first as they come to Eugene March 5 for an 8 pm tip on ESPN2.