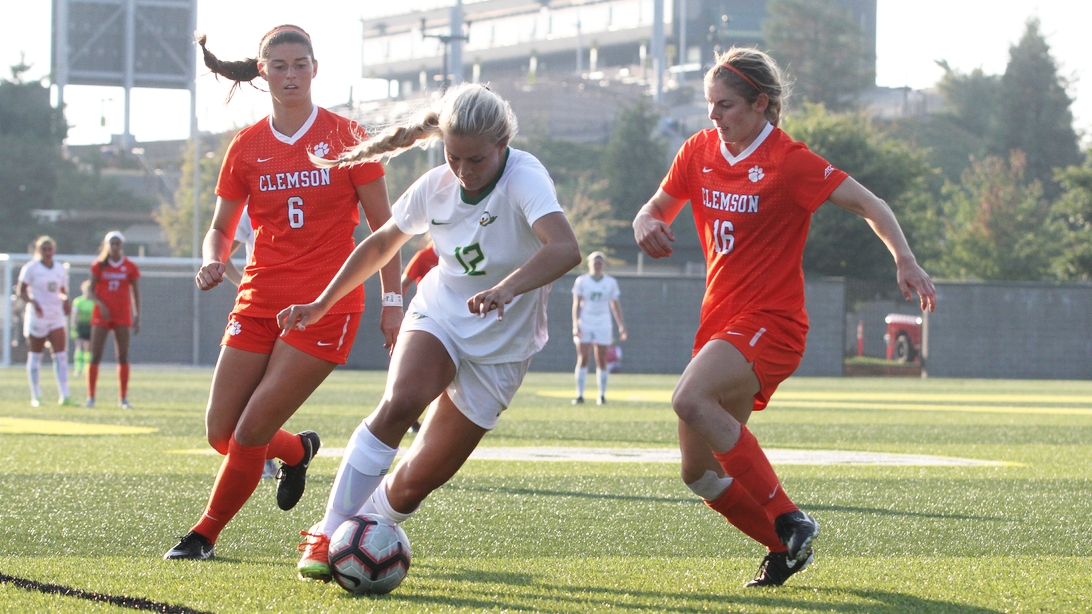 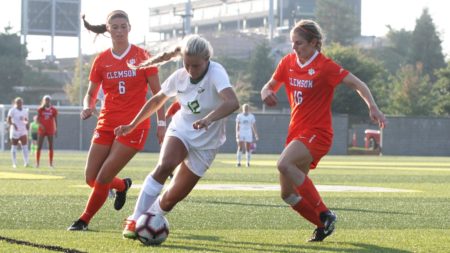 Marissa Everett picked up her second goal of the season in the 67th minute of play to give the Ducks an opening weekend sweep with their 1-0 win over Clemson Sunday afternoon at Pape` Field.

The senior forward found the score sheet in Oregon’s opening win over Stony Brook, a goal that erased Oregon’s one goal deficit just before the half.

Sunday’s game winner came after the Ducks misfired on two earlier opportunities – a shot that sailed over the bar in the first half and a goal nullified with an offside player just prior to Everett’s strike.

On the goal, Nicole Seaman gained possession just inside the Oregon half and found Everett on the right flank. With a step on the defender, Everett drew the keeper off her line then beat her cleanly to the far post.

“I saw Nicole putting on the challenge and I knew she was going to get a toe on it, so I gambled a little bit and started running forward,” she said. “Luckily, it popped out to me and I was one-on-one with the keeper.”

“That was fun. Clemson is a good team, and historically they’ve done well in the ACC,” said Oregon head coach Kat Mertz. “And we’ve said this before that the two premier conferences in the country are the ACC and the Pac-12. It was a good test. We still need to sharpen up a few things and learn from this.”

A tough road trip awaits with a two game throw-down in Lincoln against Nebraska on Friday followed by Kansas on Sunday. The Ducks return to Pape` Field to host Dartmouth on Friday, August 31. First touch is set for 7:00 pm.