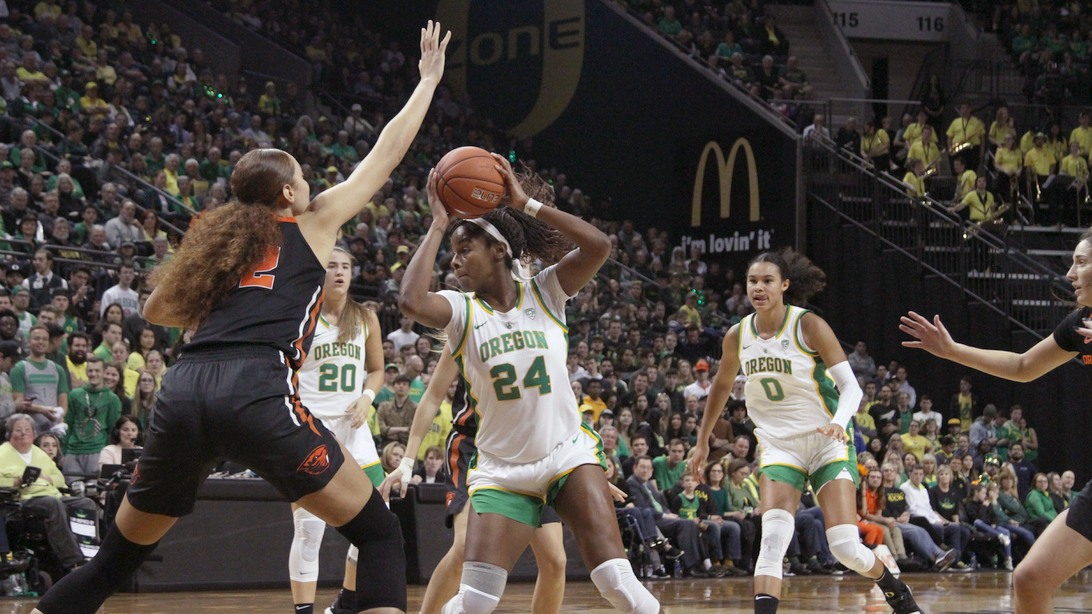 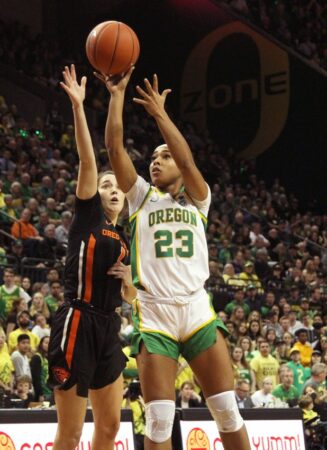 In order to come into Matthew Knight Arena and have any hopes of pulling off an upset, teams need to play an entire 40 minutes.

Oregon State found that lesson out the hard way as the Beavers’ second quarter lull helped Oregon build a 21-point lead en route to a 76-64 win for the Ducks in front of a sold out crowd of 12,364 in the first of two Civil Wars this weekend.

No. 4 Oregon clamped down on the defense and held No. 7 OSU to just 11 second quarter points to claim a 45-29 halftime lead, a lead the Ducks would never relinquish.

“I thought it was a well-played game by two really good teams. That’s a good thing. I don’t think either team is happy completely,” Duck coach Kelly Graves said.

Sabrina Ionescu led Oregon with 23 points, nine assists and four rebounds. She was 10-of-15 from the field, including two buzzer beaters at the end of the first and third quarter. Each shot were from about 30 feet away and seemed to take the wind out of the Beavers’ sail each time.

Satou Sabally added 17 points, 12 rebounds and six assists. While she wasn’t shooting well from the field, 3-of-12, the 6-foot-4 wing used her athleticism to get to the hoop and eventually get fouled and sent to the line. That’s where she did the most damage. Sabally was 10-of-11 from the charity stripe.

Ruthy Hebard had a quiet 17 points and nine rebounds, if that’s even possible. She was matched up with 6-foot-6 Taylor Jones on the inside and Hebard had to use every inside move in her utility belt in order to get her points.

“We’ve seen them turn a corner. We’ve seen Sabrina do it. She’s pretty consistent and sometimes the other two aren’t, but tonight they were,” Graves said. “I think when those three (Ionescu, Hebard and Sabally) are dialed in, there’s no better three in the country.”

Jones led the Beavers with 21 points, but she had 17 at the half. Oregon’s zone defense was able to force the ball anywhere but to Jones. When the Ducks were in a man-to-man defense, playing Jones straight up worked the best.

Destiny Slocum added 18 points, including 4-of-6 from the three-point line.

With the win, Oregon moved to 16-2 overall and 6-1 in league action, still good for a first place tie with Stanford and UCLA. The Beavers dropped their second straight game and fell to 4-3 in Pac-12 play, but are still 16-3 overall.

The Ducks were in control for the majority of the game, but in the first few minutes, in was the Beavers who came out like gangbusters. After Hebard opened the game up with an inside hoop, OSU went on a 10-0 run thanks to a couple of Slocum threes.

Oregon then decided to put the ball in Ionescu’s hands and let her go to work. She scored nine points in that first 10 minutes of action, including a deep three at the buzzer to give the home Ducks a 25-18 lead.

The Ducks made a conscious effort to speed the game up as much as possible and that seemed to rattle the Beavers. They forced OSU into some shots and Oregon began to nail some threes to extend its lead. Taylor Chavez hit a couple of deep ones to give the Ducks a double digit lead at 32-22. Oregon eventually scored its rivals 20-11 in that pivotal second quarter to take the commanding 16-point halftime advantage.

But true to form, the Beavers wouldn’t just roll over. Scott Rueck is one of the best coaches in the nation and his team would have a game plan for the second half to climb back into the game. Take the ball to the rim, make shots and take some risks defensively.

“That’s what great teams do. They make a run and made some great shots,” Graves said.

That strategy resulted into the Beavers cutting their 18-point deficit to just 10 at 53-43 with two minutes left in the third. Oregon was able to able thanks to Hebard scoring three points on one possession with a free throw, offensive rebound and a leaping leaner. Jaz Shelley scored three points the more traditional way to give the Ducks a 59-43 advantage.

Ionescu would end the third in classic Sabrina style with a three-pointer right in front of her own bench at the buzzer to give team a 62-46 lead.

“We needed a basket. I got a good screen and got some space,” she said on her three to end the third quarter.

Oregon would extend the lead to its biggest of the night, 67-46 with just under eight minutes to go. Oregon State would whittle that lead down to eight, 72-64, with 2:45 remaining largely thanks to Slocum’s 12 fourth quarter points. But Oregon put Minyon Moore on Oregon State’s leading scorer on the defensive end and Slocum wouldn’t put the ball in the basket again.

Although the Beavers just ran out of time, it shouldn’t have never got to that point, according to Ionescu.

“It wasn’t good enough. We definitely need to keep our foot on the gas and keep going and keep building from that,” she said. “But we didn’t and we need to take that into the game on Sunday.”

Round 2 of the Civil War will be in Corvallis in front of a sold out Gill Coliseum, a place Graves or any one on the Oregon roster has won at, believe it not. It’ll be the last chance for Ionescu to win at the place Gary Payton called home. Ionescu broke the former Beaver’s all-time assist record with 947 assists.

Tip time is scheduled for 1 pm televised on nationally on ESPN2.