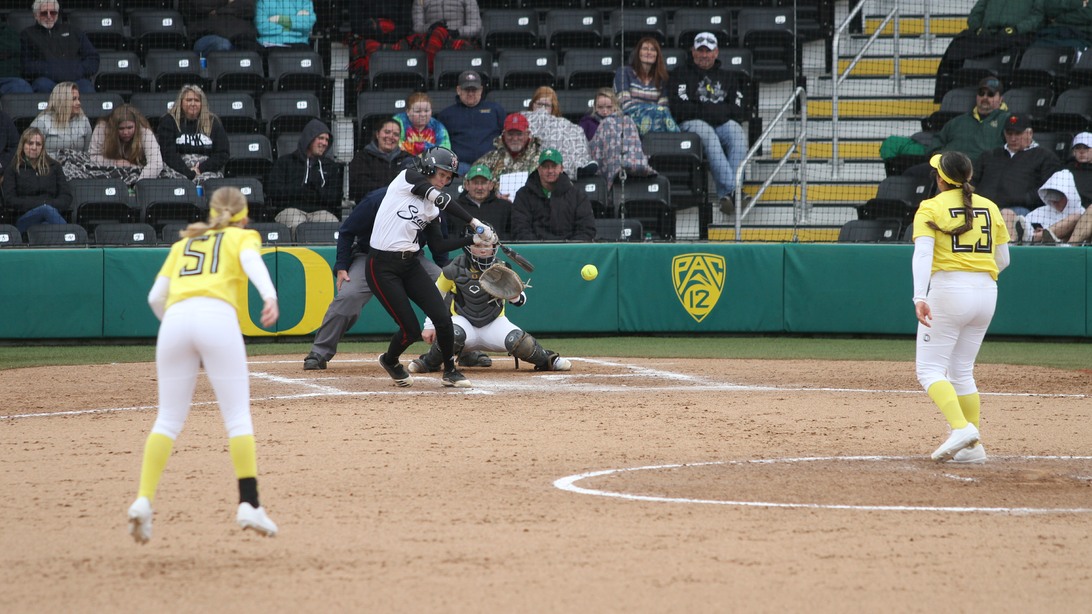 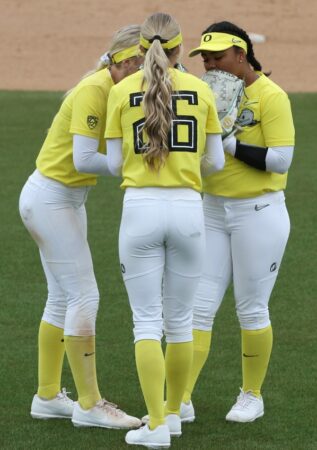 Rain washed out a pair of Friday matchups, postponing the start of the 2020 home season for the Oregon Ducks until Saturday.

After rain delays pushed the original start time back a couple of hours, the Ducks finally took the field at Jane Sanders Stadium late Saturday afternoon to kick things off against Loyola Marymount and the Ducks started things off with a bang.

The hit parade continued in the home half of the second when freshman Deijah Pangilinan homered to lead off the inning – the first of her career – and although the Ducks went on to load the bases on a single and a pair of walks, they weren’t able to push across anything more.

A walk, a sacrifice bunt and a single got Loyola Marymount on the scoreboard in the top of the third inning only to see Oregon blow the game open with a four-run outburst during their turn at bat.

Pangilinan crushed her second dinger of the day after Ariel Carlson got things started with a one-out single. Maddie Hopper singled and Jasmine Sievers moved her to third with a stand-up double then Haley Cruse singled up the middle to score both.

That would be enough for the win, although LMU did plate a pair of runs in both the fourth and fifth frames but was unable to push anything across in their final two at bats.

Samaria Diaz (6-0) picked up the win with four innings of work, allowing five hits and striking out seven. Diaz was charged with three earned runs before yielding to Brooke Yanez out of the bullpen. The junior transfer slammed the door shut, striking out four without allowing a base hit in three innings of work to pick up the save.

Saturday’s nightcap against Seattle University was a one-run ballgame through four innings thanks to a fist inning bomb from Cruse.

Then the wheels fell off for the RedHawks. Seven hits, three walks and four stolen bases later the Ducks had a 10-0 lead with Carlson’s three-run homer to center serving as the coup de grace`.

Seattle dented home plate for a couple of runs in their half of the fifth but it wasn’t enough to avoid the run-rule loss.

Jordan Dail went the distance in the circle for the Ducks, surrendering a pair of hits and striking out seven to pick up her fourth win of the season.

Sunday saw the same two teams square off in the first game of the double dip and this time the RedHawks jumped ahead 2-0 with single runs in second and third innings.

Pangilinan’s sacrifice fly to left plated Oregon’s first run in the bottom of the third, and the Ducks knotted the score in the fourth when McGowan doubled and was driven home when Jasmine Sievers reached base on a Seattle fielding error.

And that’s how things remained until the eighth inning. With a runner placed on second to start the extra inning, the Ducks pushed across the winning run thanks to Pangilinan’s sacrifice fly to left field. Diaz picked up the win in the circle for the Ducks, relieving Yanez in the top of the eighth.

The Ducks completed the weekend sweep with a 12-2 run-rule victory over Portland State in game two.

The Vikings scored first, touching Dail for a double and an RBI single in the top of first inning.

Alle Bunker’s double drove home two Oregon runs before she was driven home on Hopper’s single to shortstop, plating what proved to be the winning run.

In the second, Portland State used a single and a two-out double to pull within a run of the Ducks but could only helplessly watch as the Oregon offense exploded for seven runs in their half of the inning with Sievers delivering her first round-tripper of the season.

In the third, Rachel Cid’s two-run job following McGowan’s single closed out the scoring while Dail and freshman righthander Makenna Kliethermes combined to strike out seven Vikings while allowing just one base on balls. Dail picked up her fifth win of the season.

The Ducks have one more non-conference game on the slate at St. Mary’s this Wednesday before opening Pac-12 play at California beginning on Friday.

Oregon returns to Jane Sander Stadium to host Team USA in an exhibition game on Wednesday March 18 with the first pitch set for 6:00 pm before hosting Stanford for a three game series beginning on Saturday, March 21, also at 6:00 pm.