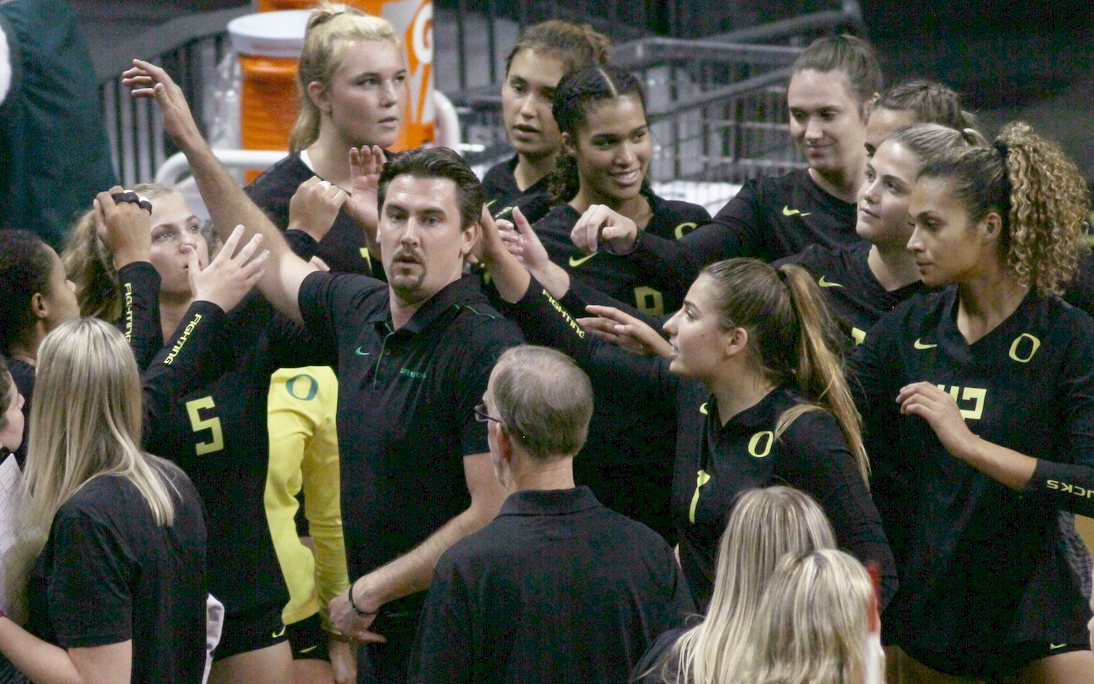 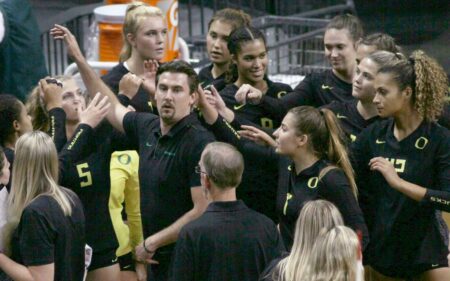 Oregon head coach Matt Ulmer would be hard pressed to find anything to quarrel about with the Ducks pair of 3-0 sweeps over UC-Irvine and Boston College to open the 2019 season.

“I was happy with a lot of things,” UO coach Matt Ulmer said after watching his side dispatch UC-Irvine 25-13, 25-16, 25-13 without hardly breaking a sweat. “It kind of felt like we were almost in mid-season form …  we made plays which you usually don’t see being made on opening night. There are still a lot of things for us to work on, but as far as an opening night…I thought we were pretty sharp.”

Willow Johnson, Ronika Stone and Brooke Nuneviller pounded the Anteater front line for 30 of Oregon’s 39 kills with redshirt freshman Kylie Robinson setting up the bulk of them with a team leading 29 assists.

Johnson paced the Ducks with 12 kills, Stone a couple behind with ten as the Ducks out hit UC-Irvine .507 to .123.

Again it was the triumvirate of Johnson, Stone and Nuneviller doing the majority of the damage, Johnson again leading the way with 14 kills with Stone just one behind with 13 and Nuneviller credited with nine.

And as in the opener Robinson led the way for the Ducks with 40 assists and added a pair of service aces.

With the two wins in hand, the 11th-ranked Ducks hit the road for a nine day, seven game marathon the will include a match-up with perennial powerhouse Penn State and a full fledged throw-down grudge match with Minnesota. The Ducks ousted the 2nd-ranked Gophers from the NCAA tournament on their home court in the Sweet Sixteen last December.  Both matches are a part of the Pac-12/Big 10 Challenge and will be played on Penn State’s home court in University Park, PA.

A stop in Pittsburgh (5:00 pm PT, ESPNU) precedes and a match against Princeton follows, then the Ducks are off to Hempstead, NY for the Hofstra Invitational to square off against St. Johns, Duke and Hofstra.

Oregon will have six days to shake the jet lag before opening Pac-12 play Thursday, September 26 at Oregon State. Pac-12 Networks will televise beginning at 5:30 pm.