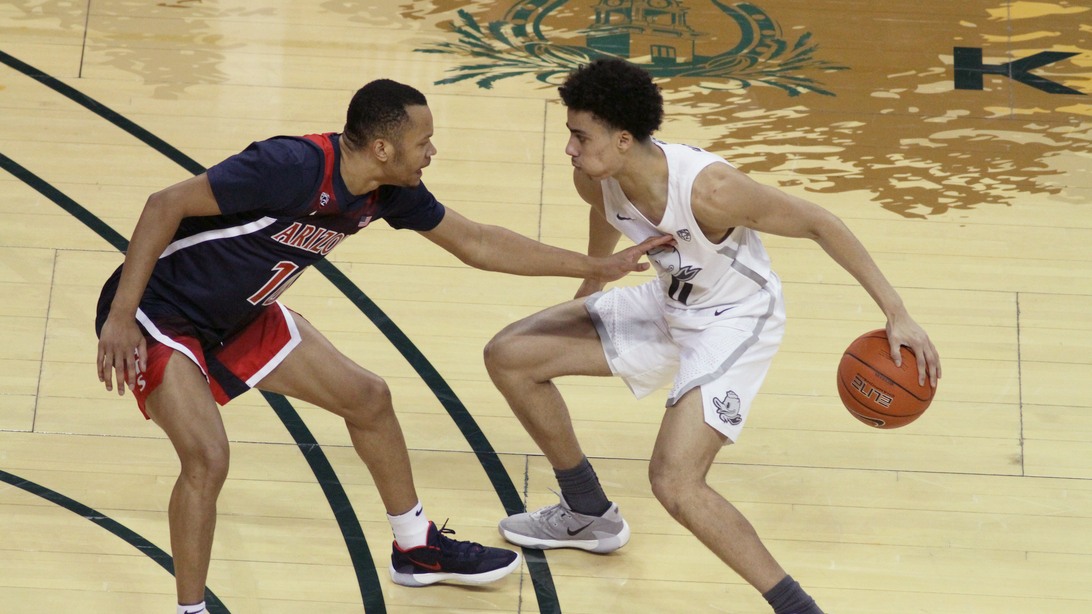 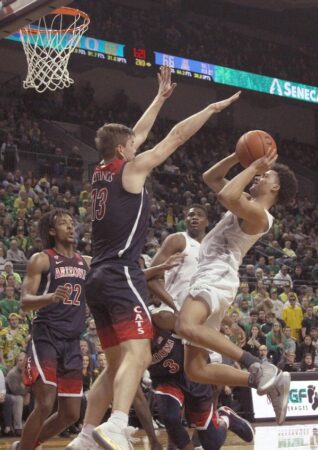 It was an instant classic.

No. 9 Oregon got one last defensive stop on a bad in-bounds pass and the Ducks came away with 74-73 overtime victory over No. 24 Arizona.

This win for the Ducks made it six consecutive seasons where the Wildcats came into Matthew Knight Arena and went home unhappy. But on this night, Arizona was really unhappy as it wasn’t thrilled with a couple of calls, or non-calls, down the stretch that just didn’t go its way.

Will Richardson’s lay-in with 15 seconds left gave the Ducks the one-point lead and then Oregon used nearly everything in the playbook to make sure Arizona never regained the lead.

Richardson blocked a would-be Dylan Smith lay-in, but the ball went out of bounds before Payton Pritchard could save it. Nico Mannion’s running jumper with four seconds left was off the mark, but Francis Okoro couldn’t corral the rebound.

With two seconds left, Arizona had one last chance, but not having a timeout to set up a play possibly burned them. Mannion’s in-bound pass was tipped right into Pritchard’s hands and that was that.

In the end, Richardson led all scorers with 21 points, five rebounds and four assists. Pritchard added 18 points to go along with seven rebounds and six assists. Chris Duarte came up big with 17 points, eight rebounds and many hustle plays to don’t show up on the stat sheet.

“We did a lot of good things and stayed in the fight. The exciting thing here on January 9th is that we got so many things to work on,” Oregon coach Dana Altman said. “There’s a lot of things we can improve upon. I hope our guys will work really hard and improve after a win.”

Oregon was able to drive into the key and make plays from there and according to Altman, that was the game plan from the start.

“We wanted to drive the ball at them and I thought we had some opportunities to penetrate and kick where we took some questionable shots,” he said. “But we really thought we could get in the lane and create some things and Will and Payton did a good job.”

Arizona was led by Mannion’s 20 points and a lot of the time, the freshman was the best player on the floor. But there was times he played as a freshman with his six turnovers.

Even before the overtime, it was Nnaji who had a chance to win the game at the buzzer, but the 6-11 center’s shot was blocked by the 6-3 Pritchard. The ball was short and wide and fell into Richardson’s hands as the clock expired.

Arizona coach Sean Miller was convinced Pritchard fouled his much taller center, but replay showed it was a cleaned block. Miller spent the entire time heading into the overtime discussing the non-call with the officials.

Miller might have spent that time wondering how his team let a 66-60 lead with just 1:46 left evaporate. Arizona had the Ducks on the ropes when Nnaji hit a 15-foot jumper for that six-point lead.

Pritchard hit free throws with 1:38 left and then after an Arizona turnover, Pritchard found himself wide open in the right corner for a three. He might have had too much time to think about it as his shot rimmed out. That rebound was corralled by Dylan Smith and he was fouled.

Smith missed the front end of the one-and-one, giving the Ducks life. Richardson hustled down the lane and was fouled in the act of shooting. The 88 percent free throw shooter knocked down both shots, making it a one-possession game.

Mannion lost the ball driving in the paint, giving Oregon one opportunity to tie or take the lead. Pritchard as able to drive into he paint himself and this time he wouldn’t miss. His leaping leaner from seven feet away with 44 seconds was good and the game was tied and eventually went into the extra period.

Besides Duarte playing his most meaningful minutes as a Duck, N’Faly Dante also had his best game. The 6-11 center had 10 points and five rebounds, but it was just his mere presence a lot of the time took Arizona out of their game on both sides of the floor.

The Ducks are now 13-3 overall and 2-1 in league action with Arizona State coming to Eugene on Saturday. The Sun Devils are 10-5 overall and 1-1 in Pac-12 play after a stunning 82-76 win over the Beavers.

Arizona State and the Ducks are scheduled for a 7:30 pm tip Saturday on the Pac-12 Network.