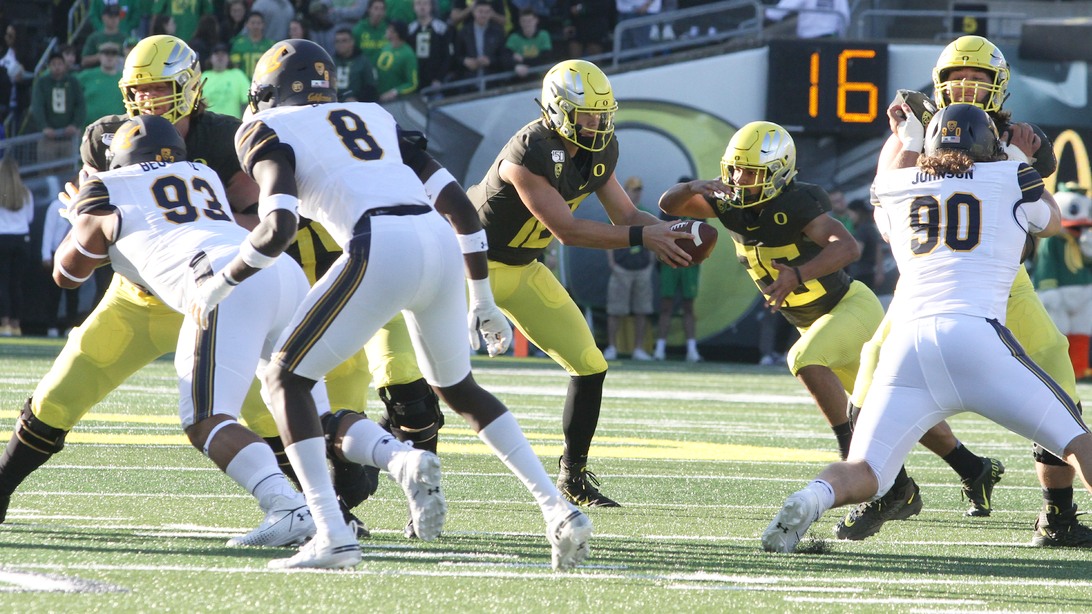 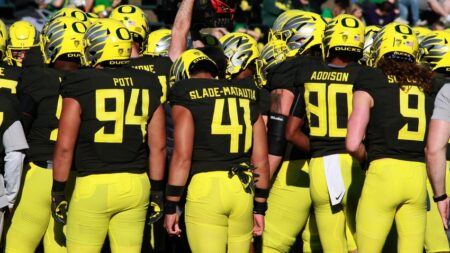 Oregon is quickly making a habit out of winning ugly, but a win is a win and the Ducks will take them any way they can.

The defense dominated Cal and the offense scored just enough in a 17-7 win over the Bears to move the No. 11 Ducks to 4-1 on the season. Cal dropped the second straight game to fall to 4-2.

As expected, Oregon’s defense showed why it’s one of the best in the conference. The Ducks allowed the Bears a touchdown on their second possession thanks to some silly penalties to extend the drive. Cal was up 7-0 with 6:58 remaining in the first quarter.

Cal would never score again on this night in front of 54,766 fans.

And it’s a good thing too for Oregon because the Ducks were having a hard time making any kind of dent on the scoreboard. They threatened to score three times in the first half, but the turnover bug came up all three times. Herbert was picked off and Travis Dye fumbled twice.

Cal held a very slim 7-0 lead, but one had the feeling that Oregon would eventually clean up the turnovers and score.

Both occurred in the second half.

Oregon cut into the lead with Camden Lewis’ first career field goal, a 28-yard kick with 7:32 left in the third quarter to make it 7-3. It was also the Ducks’ first field goal of the entire season, which is now five games in.

The Ducks finally found the end zone six minutes later on Cyrus Habibi-Likio’s one-yard plunge. The score was set up when Justin Herbert finally found his favorite target, tight end Jacob Breeland, on a 28-yard strike down to the one.

Up 10-7 with 1:38 left in the third, Oregon had to feel like one more score should end things at Autzen with the way its defense was shutting Cal down.

The Bears are playing with backup quarterback Devon Modster for the rest of the season as starter Jason Garbers was hurt last week against Arizona State and will not return in 2019.

Modster was able to move the offense down the field, but was never able to hit that big play to really threaten to score a touchdown. Missed field goals won’t help either.

Kicker Greg Thomas came into this game hitting 8-of-9 field goal attempts, but both of his tries tonight didn’t find the mark. One sailed left and one, the fourth quarter that would have made it a one-possession game, sailed right.

Oregon managed to get that one more touchdown it was looking for when Herbert turn to his left and found Jaylon Redd wide open and the slot receiver strolled in from 1-yard out. That score made it 17-7 with 7:14 remaining and that was more than enough to ice the game.

Perhaps it was the two-week layover, but Herbert didn’t seem as sharp as he usually is. The senior quarterback from Eugene was 20-of-33 for 213 yards, two touchdowns and he threw his first interception of the season.

Jacob Breeland had another solid game with five catches for 87 yards, but it was Mycah Pittman that electrified the crowd. In his season debut, the true freshman caught four passes for 43 yards. He was open on several other plays, but Herbert was unable to find him.

As for Modster, the Cal quarterback 17-of-34 for 190 yards, a touchdown and two costly interceptions.

Oregon is now 2-0 in Pac-12 play and the Buffaloes will come to Eugene for a rare Friday night contest on FS1. Colorado is coming off a 35-30 loss to Arizona as they fell to 3-2 overall and 1-1 in the South Division.