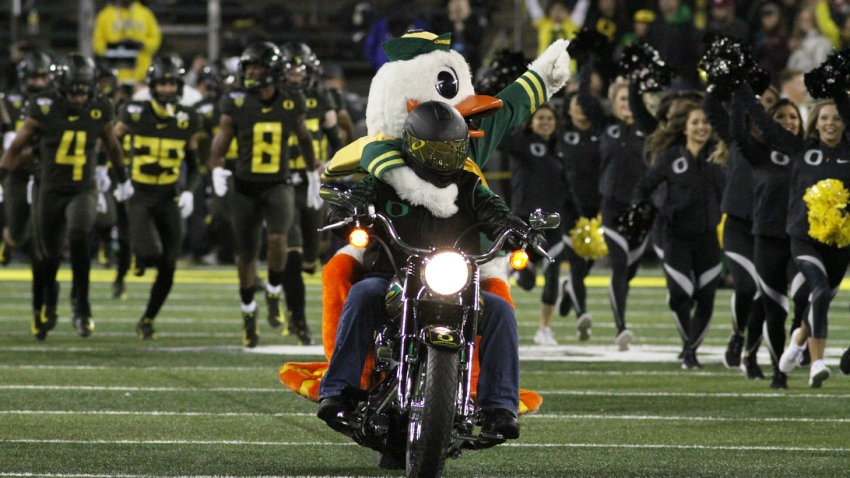 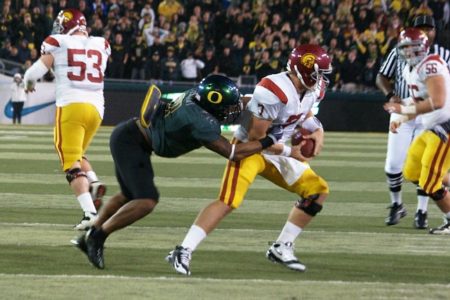 It turns out that last drive last week against Washington State was a sneak preview of what Juwan Johnson can do in an Oregon uniform.

The senior wide receiver caught seven passes for 106 yards and three touchdowns as the Ducks went to Los Angeles and crushed USC 56-24 in the Coliseum.

With the win, the No. 7 Ducks moved to 8-1 overall and 6-0 in the Pac-12 North. Barring a complete disaster and epic meltdowns, Oregon will be in Santa Clara Dec. 6 to play for the Pac-12 championship. The opponent is still yet to be determined, but it looks like a clash with Utah is in the offering.

Johnson’s two catches against the Cougars in that last minute drive propelled Oregon to kick the game-winning field goal, but on this night, the former Penn State Nittany Lion didn’t wait until the end to torch the Trojans.

His first touchdown came early in the third quarter on a high arcing pass that Johnson outjumped the defender for the ball to give Oregon a commanding 35-17 lead. It didn’t take Johnson to find the end zone again as he scored five minutes later on a slant route. That touchdown completed a six-play, 34-yard drive and gave the Ducks a 42-17 lead and the rout was on.

Johnson’s third touchdown of the night came early in the fourth on a 37-yard pass and catch. He showed his athletic ability as he caught the ball on a crossing route, changed direction and outran the USC defense to the end zone for the 49-17 advantage.

It would have been hard to imagine the Ducks would be up by so much after a first quarter that is better left forgotten.

USC took the opening kickoff and drove down the field with relative ease. Quarterback Kedon Slovis found Drake London in the end zone to complete a 16-play, 77-yard scoring drive. When Oregon got the ball, nothing was going right. Justin Herbert was missing receivers and the offensive line was getting beat at the line of scrimmage.

On the second possession, Herbert threw just his second interception of the season deep in Oregon territory. The Duck defense held the Trojans to a 24-yard field goal, but it was 10-0 for the home team and momentum was clearly on the USC sideline.

Then a switch was flipped and it was all Ducks for the rest of the night.

Slovis started to play like a true freshman and was picked off by Verone McKinley III. That was just the first of three picks for the Oregon secondary. But this first interception gave Oregon life.

Herbert started to play like a senior and drove Oregon 59 yards in just over two minutes. The senior from Eugene took it himself for 10 yards and his first rushing touchdown of the season.

Oregon found the end zone three times in the last two minutes of the half. Jaylon Redd scored with 2:16 on a tough two-yard run on a sweep play where he broke one tackle and beat the defense to the pylon. Oregon’s 14-10 lead turned into 21-10 when Brady Breeze picked off Klovis and ran 32 yards down the left sideline for the Pick-6.

USC was able to quickly score on Michael Pittman’s 17-yard touchdown reception with 20 seconds remaining before halftime. The Trojans should have been contented with the 21-17 deficit heading into the break, but they kicked it long instead of squibbing it down the middle of the field.

Mychal Wright made the Trojans pay with the 100-yard kickoff return for a touchdown. A 21-17 lead turned into a 28-17 halftime lead for the Ducks. Less than two minutes into the second half, Oregon struck again on Johnson’s first score and it was 35-17 and the game was virtually over at that point.

Everything wasn’t quite balloons and smiles for the Ducks, however.

It was a very emotional game and the officials weren’t afraid to let those flags fly. Oregon was uncharacteristically flagged 11 times for 157 yard. USC was flagged eight times for 92 yards. Each team had a player ejected for targeting and the Ducks’ Andrew Faoliu was ejected with two straight unsportsmanlike penalties.

All in all, the penalties didn’t hurt the Ducks. It helps that Herbert played nearly a flawless game after the first 15 minutes. Herbert finished the game 21-of-26 for 226 yards, three touchdowns and one interception.

His counterpart, Slovis, was 32-of-57 for 264 yards, three touchdowns, but those three interceptions severely hurt the Trojans’ chances. He also fumbled deep in Oregon territory that killed a would-be scoring drive in the second quarter.

The Ducks can now enjoy this win for a while with the bye week up next. After a week off, Oregon will host Arizona No. 16, a team in peril. The Wildcats were crushed by the Beavers at home 56-38 earlier in the day.

Arizona also has a bye next week so it will come into Eugene with a 4-5 overall record and 2-5 in the Pac-12 South.