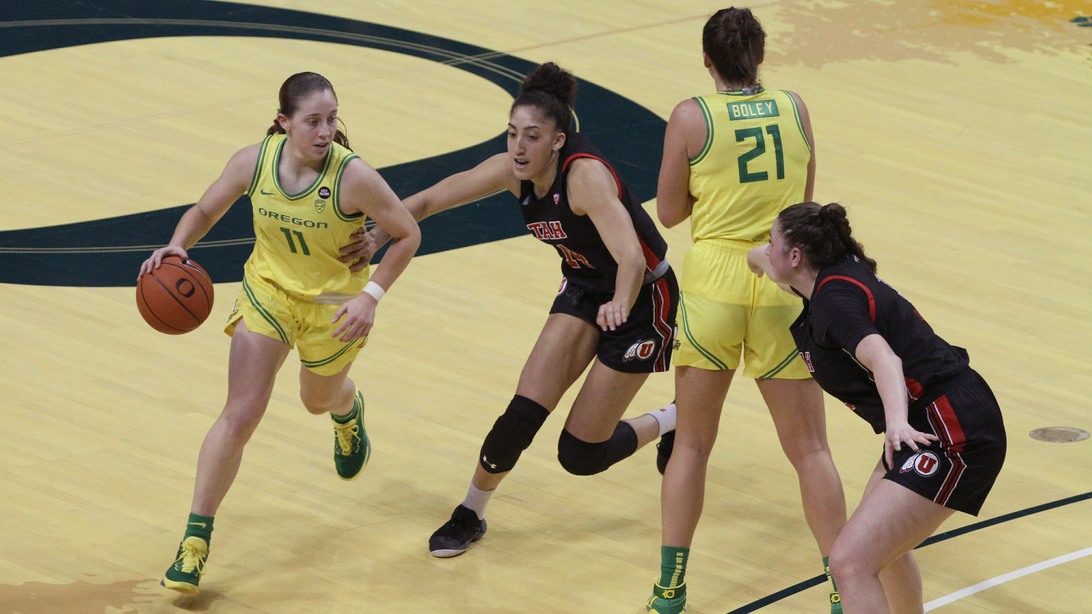 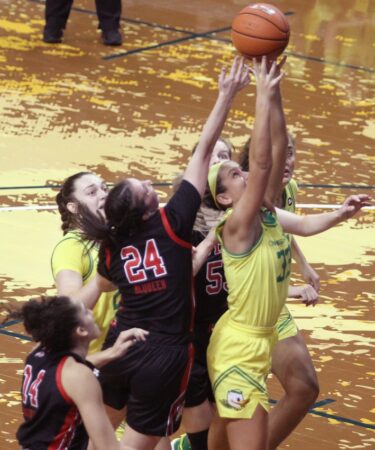 The 10th-ranked Oregon Ducks (4-0, 2-0) raced past the Utah Utes 85-43 Sunday morning at Matthew Knight Arena to complete a Pac-12 conference opening sweep of the mountain schools.

The win was a record setting 23rd straight for the Ducks and its 21st consecutive win in the friendly confines of Matthew Knight Arena.

With sophomore post Sedona Prince on the bench with her left ankle in a walking boot the Ducks turned to senior forward Erin Boley who along with freshman point guard Te-Hina Paopao led the Ducks with 17 points each.

Boley opened the scoring with a trey from the corner and Utah never got any closer.

With the Ducks playing zone defense for much of the first quarter Nyara Sabally set the defensive tone early with a pair of blocks inside on the Utes post Lola Pendande, the second triggering a Boley fast break lay-up and one that pushed Oregon’s lead to 13-4 midway through the first quarter. Sabally ended up with four blocks on the day. 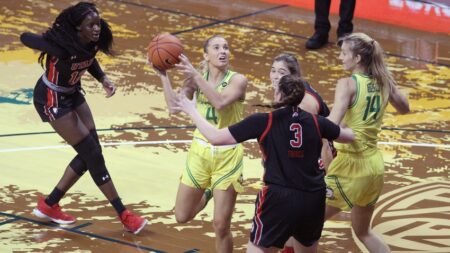 Despite a 3:33 scoring drought to end the quarter, Oregon built a 20-4 lead at the first break with Boley netting 13 points in the opening stanza.

Quarter number two was more of the same with some of Oregon’s newcomers doing the damage with Angela Dugalic’s three at the buzzer sending the Ducks to a 45-20 halftime lead.

Paopao buried a pair of treys to open the second half and again the Ducks were off and running, extending their lead to 37 points by the end of the frame, 66-29.

The it was left to the newcomers with Sydney Parrish, Anglea Dugalic, Maddie Scherr and Kylee Watson along with sophomore guard Jaz Shelley owning the fourth quarter outscoring the Utes 19-3 in the early going to put an exclamation point on the Ducks’ second Pac-12 win of the season.

“I did not know what to expect this weekend, the first weekend of Pac-12 (play)”, said head coach Kelly Graves. “I’m not sure I expected the two outcomes, the point spreads. But I was really pleased … I thought our kids really defended well.”

Next up for the Ducks is a rivalry match up with the Beavers in Corvallis. The opening tip is set for 4:00 pm on Sunday, December 13th. Pac-12 Networks will carry the telecast.