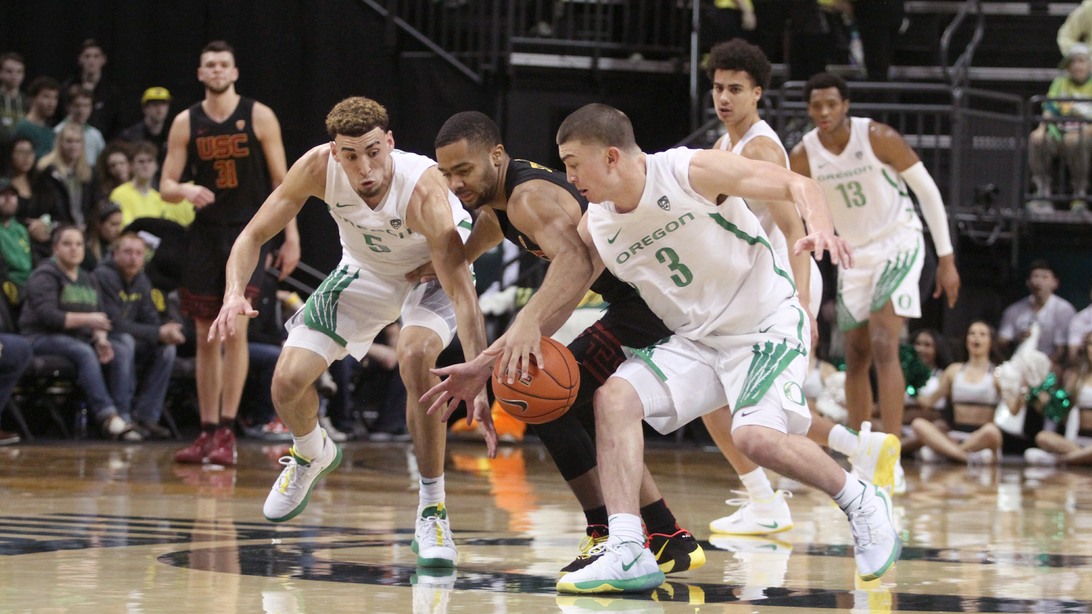 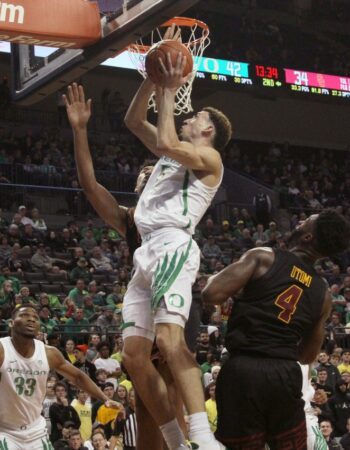 Playing extra minutes is quickly becoming a habit for the Ducks. But as long as the wins keep coming, No. 12 Oregon won’t mind.

After taking Washington to overtime last week, the Ducks went into double overtime tonight to take down USC 79-70 in front of 7,497 inside Matthew Knight Arena.

With the win, Oregon moved into first place in the conference with a 5-2 record and 16-4 overall. The Ducks are also 4-1 in overtime games as well.

Chris Duarte was two steals shy of a triple-double as he led the Ducks with 30 points, 11 rebounds and eight steals. Payton Pritchard filled the stat sheet as usual with 24 points and eight assists. He also become the first Pac-12 player ever to accumulate 1,500 points, 600 assists and 500 rebounds for a career. Assist No. 600 came in the second half on a fast break that ended with a lob to Duarte for the dunk.

The Ducks’ backcourt duo were the only ones in double figures.

USC freshman Onyeka Okongwu proved to be quite a handful as the 6-foot-9 center led the Trojans with 23 points and 14 rebounds. Jonah Mathews scored 13 and Daniel Utomi added 10.

After USC scored to open the second half to tie the game at 32, Oregon went on a 10-0 run to build up the 42-32 lead with 16:00 minutes left. The Ducks maintained that advantage for the next eight minutes where they had a seemingly comfortable 56-45 lead with eight to go in regulation.

But then the Trojans made their move.

USC erased that deficit in three minutes by going on an 11-0 run, capped off with a Mathews three up top. Until then, Oregon had held the Trojans leading scorer at bay thanks to some good defense and Mathews being in foul trouble.

But the senior finally got on track just in time for the visitors. His three from up top gave USC at 62-58 lead with just 1:05 left. CJ Walker’s leaping leaner in the paint cut the lead to two and after a huge defensive stop, Oregon tied the game on Pritchard’s lay-in with 26 seconds left.

Oregon’s press caused a turnover, giving the Ducks the last shot, a situation they definitely wanted to be in. But anyone looking for heroics at the buzzer, just like in Seattle, were to be disappointed as the Trojans forced Pritchard to pass the ball and Will Richardson’s 17-footer at the buzzer was on the mark, sending the Ducks into their second straight overtime game.

The two teams traded baskets and free throws in the first overtime and Oregon, once again, found itself with the last shot with the game tied, this time at 67-67. This time, Pritchard was able to take the potential game-winner, but he was forced to shoot a 19-foot jumper over a 6-foot-11 Nick Rakocevic and the shot was long and wide.

In double overtime, one team eventually ran out of gas and thankfully for the Ducks, it wasn’t them.

Duarte’s three with 2:59 left gave Oregon a 74-68 lead and that was pretty much the nail in the coffin. USC scored three points in the double overtime, all coming from the free throw line. Duarte then stole the ball for the eighth time and raced down the floor for the lay-in to give Oregon a 76-68 lead and the Duck fans could go home breathing a little easier.

Oregon has an extra day to prepare for UCLA, who comes to Eugene for a Sunday matinee. The Ducks will need the extra 24 hours to rest and recover. They’ve played 95 game minutes in the last two contests and Oregon will need to avoid some wary legs.

The Bruins will be coming in after a 62-58 win in Corvallis over the Beavers. UCLA is having what could be considered a down year for them as it is just 3-3 in league and 10-9 overall. Two of those league victories came on the road at Washington and OSU, however.

So on paper, it should be an easy Oregon win, but the Bruins will be looking for yet another surprising win away from Pauley Pavilion.