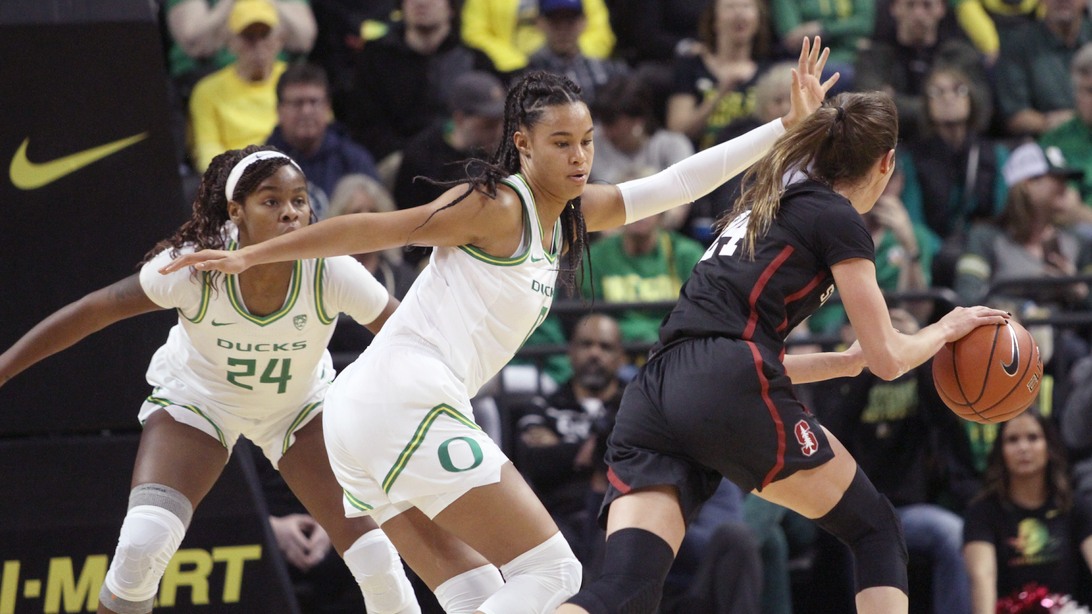 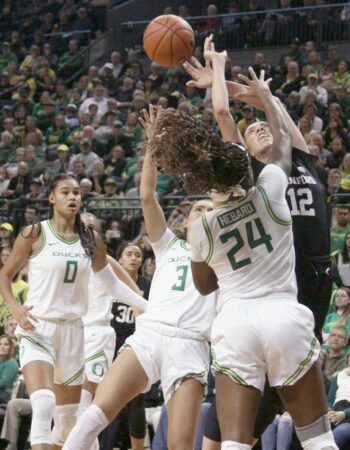 “Leave no doubt” was the working motto when the Oregon Ducks headed to Las Vegas for the 2020 Pac-12 conference tournament. A loss in the final a year ago to Stanford loomed large on the horizon but the Cardinal were on the other side of the bracket leaving the Utah Utes as the first task at hand.

As the top seed, Oregon had a bye while Utah dispatched Washington the night before 72-63. It took the Ducks a quarter to get their game legs back beneath them after the five day break leading up to the tournament and after one quarter Utah led 19-16.

Then the Utes got their doors blown off in a 29-10 blitzkrieg of a second quarter that gave Oregon a 45-29 halftime lead.

With the game all but decided, the two teams essentially traded baskets over the final two quarters, sending Ducks into the semi-final round against Arizona.

Oregon hit an even 50% from the floor against the Utes going 29-58, sinking a dozen of their 23 three point attempts (52.2%). Defensively, the Ducks forced Utah into 16 turnovers and as a team was credited with 11 steals.

In both previous match-ups Oregon had come away with victories against Arizona – a scrappy 71-64 decision two nights after the Ducks’ only conference loss to ASU, and an 85-52 shellacking at Matthew Knight Arena in early February.

Paired up again in Saturday’s semi-finals the Ducks weren’t at their best in an 88-70 win, allowing Arizona’s Aari McDonald to net a game high 34 points and Reese Cate to 13 but limited the rest of the Wildcats to 23 points on 8 for 25 shooting from the floor.

Ionescu torched the Wildcats for 31 points, hitting six of her nine shots from behind the arc but it was arguably Erin Boley’s 18 points that turned the game in Oregon’s favor as the Ducks outscored Arizona 20-13 in the second quarter and then held on the rest of the way to advance to the final.

Stanford posted double digit victories over Oregon State and UCLA to reach the final, setting up a third straight match-up with the Ducks for the tournament title.

Unlike a year ago when the Cardinal avenged an 88-48 thrashing on their home court at the hand of Oregon one month earlier in the only conference meeting between the two teams with a 64-57 win to claim the tournament trophy, tarnishing the Ducks’ second regular season conference championship.

That loss burned white hot through the Ducks’ NCAA run and fueled Oregon to their 87-55 beatdown of Stanford at Matthew Knight Arena in their only regular season matchup and then provided the motivation sweep up all the hardware with an 89-56 statement in the championship game on Sunday.

As they had two days earlier against Utah, Oregon used a script-perfect second quarter to take a stranglehold on the championship.

After being held scoreless in the opening frame, Ionescu erupted for 15 of her 20 points as the Ducks outscored Stanford 29-9 in the second quarter and was never threatened again by the fourth-ranked Cardinal.

Minyon Moore connected for a season high 21 points including a 4-5 night from behind the three-point line and Ruthy Hebard took top scoring honors with 24 points, hitting nine of her 11 shots and going a perfect six for six from the charity stripe.

With both the regular season and tournament titles firmly in hand and with an overall record of 31-2 the Ducks are a lock to be selected as one of the four regional #1-seeds for the NCAA tournament which means Oregon will host the first two rounds at Matthew Knight Arena and should they advance, be assigned to the Portland regional at the Moda Center for the Sweet 16 and Elite Eight. The final NCAA pairings will be announced on Monday, March 16th.