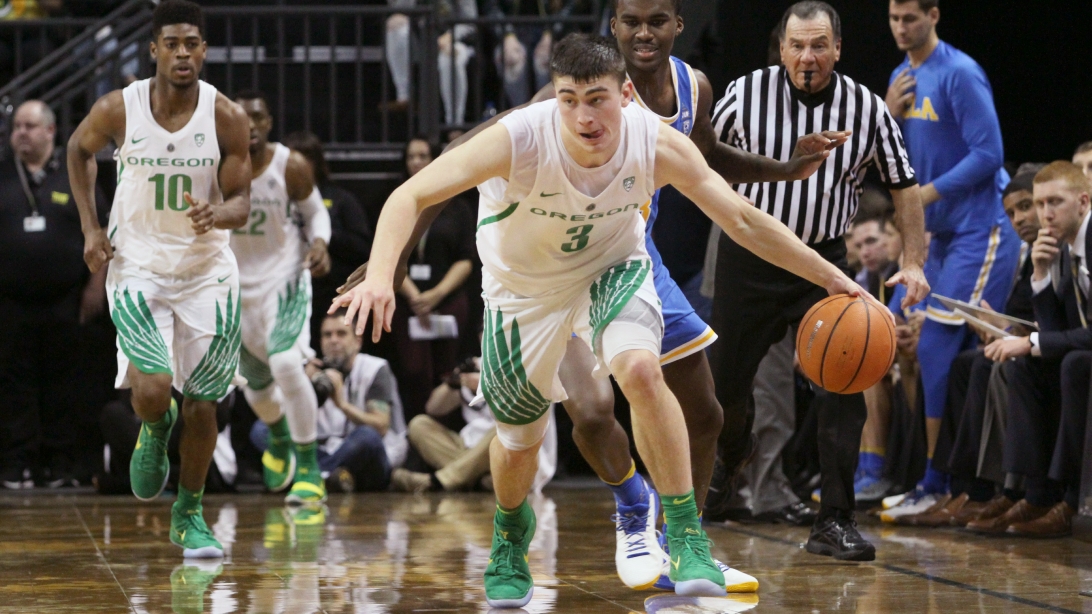 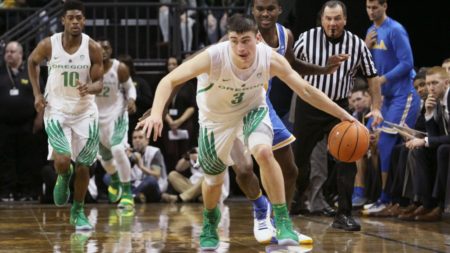 Dana Altman most likely would have preferred to earn his 200th win at Oregon in a much easier fashion, but with this team, it was fitting with the way that big win came.

Oregon had an 18-point second half lead over UCLA, only to watch it disappear. Then they had to watch Aaron Holiday’s desperation midcourt buzzer-beater go off the rim and off as the Ducks came away with a 94-91 victory over the Bruins in front of a sellout Matthew Knight Arena crowd of 12,364.

With the win, Oregon moved to 3-4 in conference play and 13-7 overall. UCLA goes back to Los Angeles getting swept in the Willamette Valley, a 4-4 conference mark and also 13-7 overall.

The big debate in college basketball for a while has been what to do when you’re up three in the final seconds. Should they foul and send the opponent to the free throw line for two shots and preserve the lead or just play defense and take their chances.

Oregon put this strategy on full display and basically turned the final 15 seconds into a free throw shooting challenge. It’s a strategy that was in the Ducks advantage and it showed. Payton Pritchard sank four free throws in the final six seconds, including two with just 1.8 remaining.

UCLA didn’t have any timeouts left, so coach Steve Alford couldn’t draw up a play. As it turned out, the Bruins almost didn’t need a set play as Holiday had a very good look at midcourt. Fortunately for Oregon, Holiday couldn’t duplicate Boise State’s half-court heave earlier in the season that stunned the Ducks.

Pritchard and Kenny Wooten were all over Holiday and made the guard adjust his shot just enough to force the attempt off line.

Oregon held a double-digit lead for much of the second half until UCLA went on an 10-0 run with three minutes to go, turning an 88-77 deficit into just a one-point affair at 88-87 with 1:09 left.

Brown ended the Bruin run with two clutch free throws to increase the slim lead to three at 90-87 at the 1:00 mark. Thomas Welsh attempted a three to tie the game with 45 seconds left, but his shot was short. Pritchard grabbed the rebound and put the Ducks in a nice position to win the game.

A score of any kind would have made it a two-possession contest, putting UCLA firmly on the ropes. But Oregon didn’t manage to get the shot off with 13 seconds remaining and the free throw contest began.

The second half wasn’t the best half for the Ducks this season, but the first half might have been.

Oregon controlled the entire first half, almost scoring at will. The Ducks moved the ball offensively to get open looks, something Altman has been preaching the entire season. They had 14 assists on 20 made field goals and didn’t turn the ball over one time in the first 20 minutes of action.

Bailey added a huge spark off the bench with 15 points on 5-of-6 from the field.

On the flip side, UCLA turned the ball over nine times and if it weren’t for 17 made shots at the charity stripe in the first half alone, the game would have been a complete blowout.

Now whether this win is the beginning of something is all up to the Ducks. They showed how special they could be in the first half and showed some maturity down the stretch by making the correct plays and hanging on.

Ironically, the Ducks’ first test to see which way the season will go are the Beavers in one week. Oregon didn’t look good in the first Civil War match-up in Corvallis earlier in the month. Oregon State came away with a 76-64 win in a game where the Ducks didn’t make any plays down the stretch and it cost them. Oregon proved that they can do so against UCLA. Now the young Ducks have to show it wasn’t just a one-time thing.