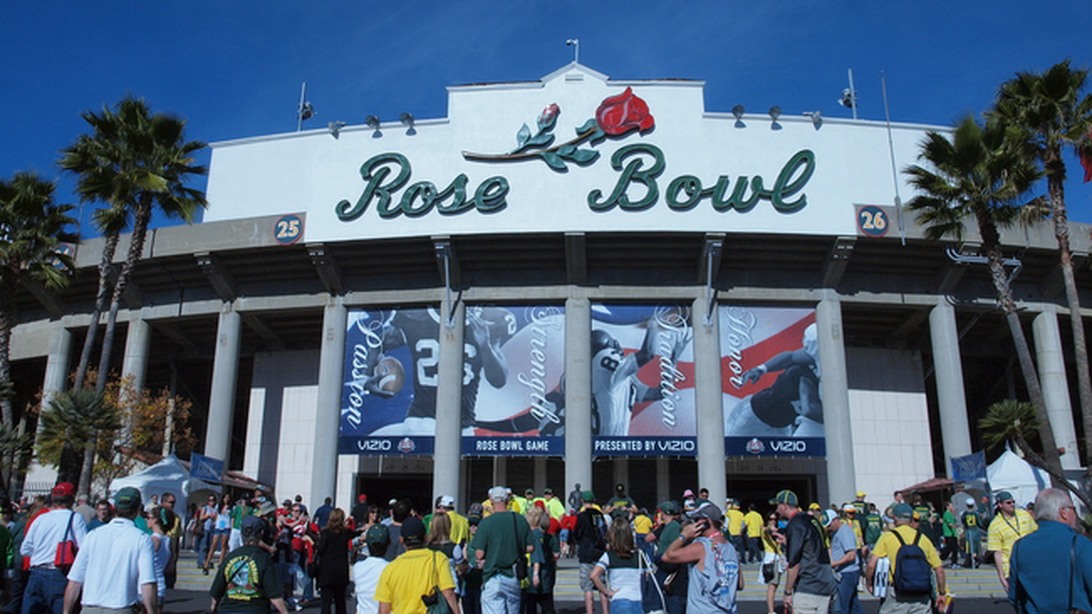 Oregon couldn’t have scripted it any better.

When Justin Herbert kneeled down with 28 seconds left, it clinched the Ducks’ epic 28-27 victory over Wisconsin in the 106th Rose Bowl.

The senior quarterback didn’t have his best game statistically, but his three rushing touchdowns, yes rushing, were the difference in the game. Herbert came into the game with just one rushing touchdown, but his last one on New Year’s Day came on a read-option with 7:31 left.

Herbert made the perfect read, broke free on the right side, use his blockers and scored from 31 yards out.

That made it 28-27 Oregon and the Ducks used their defense to hold on to dear life for the rest of the game.

It was the defense that kept the Ducks in it as Wisconsin ran its game plan just as it wanted to. The Badgers held the ball for nearly 40 minutes of the game, including 13 minutes of the third quarter.

Despite being on the field forever and getting beat up with Wisconsin’s power run game, the Ducks were able to cause four turnovers, which directly led to three Oregon touchdowns.

After the first possession of the game, it looked like the Ducks were going to have an easy time of it.

Herbert drove the Ducks down 75 yards on 12 plays that ended on the first of his trio of touchdowns. He beat the Badger defense to the corner from four yards out and just like that it was 7-0 Oregon.

But that lead was very short-lived as Aron Cruickshank returned the ensuing kickoff 95 yards for the touchdown and the 7-7 tie. It was the first time Oregon has allowed a kickoff return for a score since 2006.

With the score tied, Oregon’s offense never found the groove it enjoyed in that first possession. The Badgers took a 10-7 lead when Collin Larsh hit a 44-yard field with 8:07 left in the first quarter.

Both teams traded possessions for almost the rest of the half, but when Thomas Graham intercepted Jack Coan at the four minute mark in the second quarter and returned it to the Badger 33, it set up Oregon’s offense nicely to either tie the game or take the lead.

The Ducks quickly scored on three plays, ending on, once again, a Herbert run for a touchdown.

Wisconsin was able to score three minutes later on an 11-yard touchdown pass to Quintez Cephus just 11 seconds before the halftime break.

Cephus was Coan’s favorite target as the junior caught seven passes for 59 yards. For the game, the Wisconsin quarterback was an efficient 23-of-35 for 186 yards and a touchdown.

Up 17-14, the Badgers had a golden opportunity to make it a two-possession game as they had the ball to begin the second half. But after seven plays and eight yards, Wisconsin went to punt and presented the biggest defensive play of the game.

Punter Anthony Lotti mishandled the snap and Brady Breeze was more than willing to pick the ball up and go 31 yards for the touchdown to give Oregon much-needed momentum.

But with the defensive score, it gave Wisconsin two straight possessions and the Badgers wouldn’t waste this possession. They drove down 65 yards on 11 plays and used seven minutes off the clock to go up 24-21. Wisconsin had a fourth-and-inches from the one and not only did running back Mason Stokke get the first down, he got the touchdown.

Oregon’s first offensive play of the second half came with 4:53 on the clock. The Ducks had a three-and-out and was forced to punt the ball. Wisconsin took the ball two minutes later and held on to it for another six minutes.

But the Badgers had to settle for another field goal, a 27-yarder to keep it at a one-possession game at 27-21.

Oregon was forced to punt once again, making the defense needing to come up with another big play. Fortunately they did.

Breeze, the defensive player of the game, forced another Badger fumble and Bryson Young pounced on it.

With 7:51 left and Wisconsin’s prowess to hold the ball, one had to think this might be the Ducks’ last chance to take the lead. Oregon didn’t waste any time with Herbert’s 31-yard touchdown on the very first play of the drive.

Both teams actually had time to trade possessions, but when the Badgers received the ball with four minutes to go, this was going to be the possession that decides it.

On a third-and-six, it looked like Wisconsin completed a 12-yard pass, but they were flagged for offensive pass interference when it was determined a Badger receiver pushed off.

It set up a third-and-20 and Coan’s pass was knocked down. Instead of going for it on fourth, Wisconsin punted, hoping that with two timeouts left and 2:38 left, it was hoping to get the ball back one more time.

But when Herbert found Juwan Johnson in the flat on a third-and-three and the big receiver rumbled for 28 yards and iced the game.