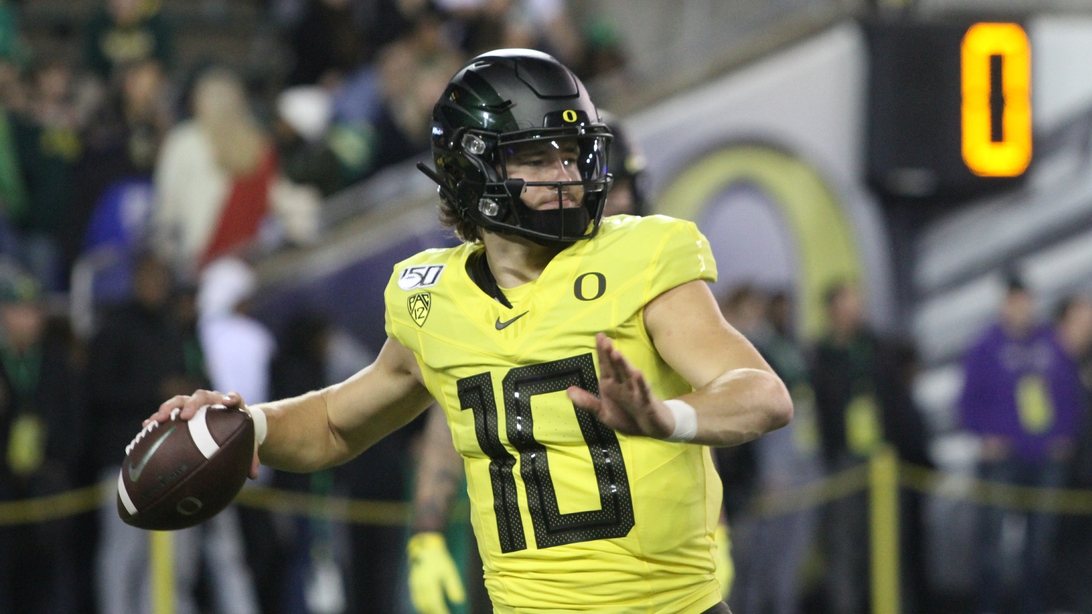 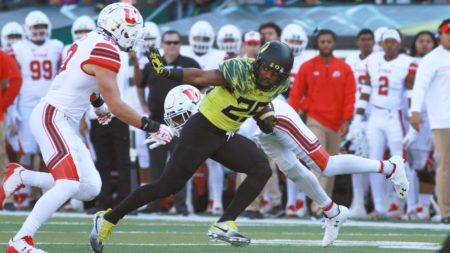 For the first time in five years, the Ducks are Pasadena bound.

Oregon dominated No. 5 Utah 37-15 to win the Pac-12 championship at Levi’s Stadium in Santa Clara, Calif. in front of 38,679, many of those Oregon fans who made the quick trip down south.

The last time the Ducks played in the Rose Bowl was 2015 when Marcus Mariota’s team crushed Florida State 59-20 in the first ever College Playoff semi-final. While Oregon’s opponent is yet to be determined, it’s sure to be a very good Big Ten team.

But for now, the opponent in 25 days really doesn’t matter to the Ducks. Mario Cristobal’s rebuild of this program just hit yet another milestone with a conference title. In just his second year, Cristobal gave a senior class that finished 4-8 in their freshman year something they will cherish forever.

“I couldn’t be more proud of a group of men. I believe they outwork everybody and made out of the right stuff,” Cristobal said. “They’re created a culture and a night like tonight validates all their hard work. We’re extremely excited to win the Pac-12 championship tonight.”

Utah came into the game with a playoff appearance of its own possibly in the future. If the Utes had won, they would have had a great case to be the No. 4 team with the chance at a national title.

Those dreams might have been put on ice with their opening possession.

Utah was able to take the opening kickoff and drive down to the Oregon 33-yard line for a 3-and-1 and the Ducks’ defensive line stuffed tailback Zack Moss at the line of scrimmage to set up fourth down. In what might be the play of the game, Utah went to the well again with Moss and Brady Breeze and Austin Fauliu stopped him again to end the drive.

With that huge stop and momentum, Justin Herbert drove the Ducks 67 yards on nine plays with CJ Verdell scoring from three yards out and the early 7-0 lead.

Verdell scoring and the Duck defensive line dominating were themes that just continued all night long.

The sophomore running back scored three times and racked up 208 yards on 18 carries. His 70-yard touchdown run midway in the fourth quarter gave Oregon a 30-15 lead, put the game on ice and gave many Duck fans the confidence to check out airline prices to Pasadena on New Year’s.

Oregon gained 239 yards on the ground, the most yards the Utes defense had given up this season. Hearing all week that Utah was the more physical team was a motivating factor, according to Verdell.

“It definitely put a little chip on our shoulders,” he said. “We try not to focus on the outside noise too much, but hearing they are the most physical team in the Pac-12 made us to want to come out here and work harder.”

Before that big run down the sideline, Oregon was up 23-15 after securing a 20-0 halftime lead. That first half might have been the best 30 minutes of Duck football of the season.

Kicker Camden Lewis made it 10-0 on a 23-yard field goal with 4:17 left in the first quarter. The freshman’s struggles have been well-chronicled this season, but the former high school All-American was perfect in the biggest game of the season with three field goals.

Oregon made it 17-0 in the second quarter when Herbert found Johnny Johnson III wide open for a 45-yard touchdown with 11:02 left before halftime. Lewis added a 30-yard field goal seven minutes later for the halftime score.

Utah’s offense was completely shut down in the first half thanks to a defensive line that was on a mission. Kayvon Thibodeaux turned out to the Utes’ worst nightmare. It seemed like he was in the backfield as much as the running back. Not only did the true freshman block a punt that set up the first goal, the former No. 1 recruit was credited with 2.5 sacks and five tackles.

“The proof is in the pudding,” Thibodeaux said. “I feel like I’ve gotten a lot better and I’m going to continue to get better. You can say it’s only up from here.

While the defensive line pressured quarterback Tyler Huntley, the secondary made play after play. Safety Brady Breeze led the way with nine tackles and an interception.

Down 20 at halftime, the Utes came out of the halftime break a different team. They were 11-1 for a reason and there was no way they weren’t going away without a fight.

After a three-and-out by Utah’s defense, the Utes drove down 53-yards on six plays and found the end zone for the first time of the night on a screen pass to Moss. He broke a couple of tackles to go 24 yards and make it 20-7.

Oregon answered with Lewis’ third field goal to make it 23-7, but Utah made it a one-possession game with a seven-play, 75-yard drive that ended on a 25-yard pass to Samson Nacua. Utah decided to go for two to cut the deficit to eight points.

All the momentum was on Utah’s sideline and they got the ball at the start of the fourth quarter a chance to tie the contest. The Utes drove it down to the Oregon 48 when Thibodeaux dumped Huntley for an eight-yard loss to set up a third-and-20. A pass to Moss gained 16 yards, but after going for it on fourth down three times before and getting stopped all three times, coach Kyle Whittingham decided to punt.

Verdell ended any doubt when he found a crease on a third-and-1 and there was nothing but green grass between him and the end zone. With seven minutes to go, it was 30-15 and the celebration could at least begin. Verdell’s 31-yard score four minutes later was just frosting on the Pac-12 title cake.