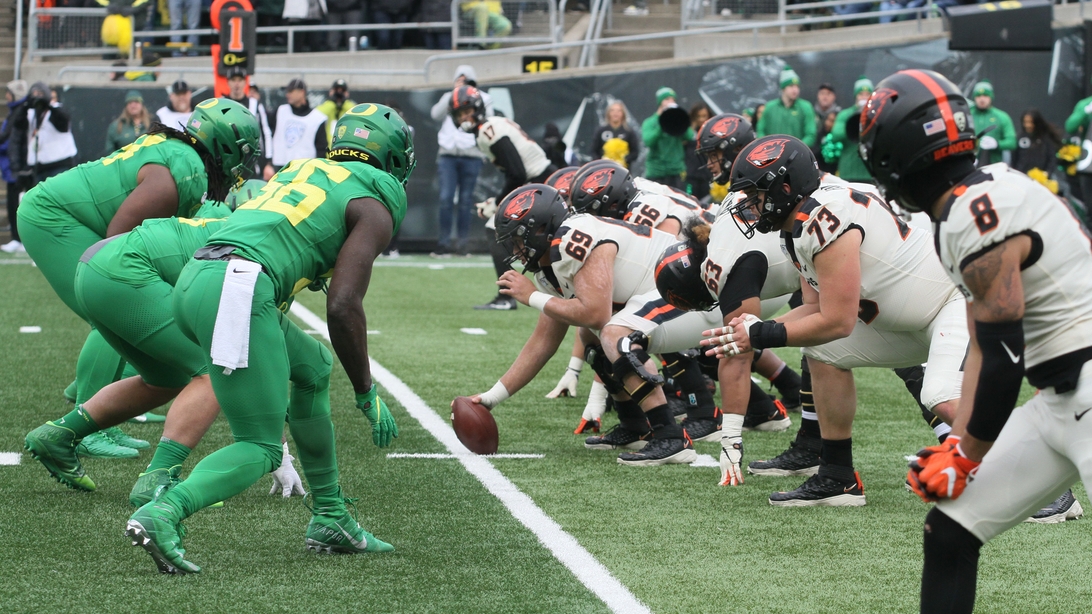 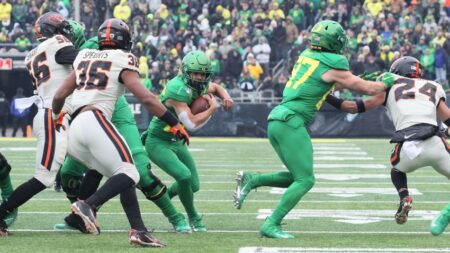 It’s a two-touchdown win over Oregon State, but it sure didn’t feel that way.

This game was far from over until Cyrus Habibi-Likio’s touchdown from 20 yards out with 1:15 remaining gave the Ducks a 24-10 win in the 123rd Civil War.

With the win, Oregon finishes the regular season 10-2 and Pac-12 North champions. The Ducks will now have to focus on a quick turnaround as they will face Utah for the conference championship Dec. 6 in Santa Clara. Although the college football playoff won’t be on the line for the Ducks, it will be very much in play for the Utes. A Utah win would put them at 12-1 and a legitimate case to be one of four teams that will get to play for a national championship.

Oregon’s playoff hopes were dashed last week with its 31-28 loss to Arizona State, but with Alabama’s loss to Auburn, the Ducks could have moved up to the spot Utah is in right now.

But ASU was the last thing on the Ducks’ collective mind with the Beavers coming into Autzen Stadium. It was Senior Day, Justin Herbert’s, Troy Dye’s and 24 other senior’s last home game as a Duck and it was a memorable one.

Oregon’s defense held the Beaver offense down for most of the game, allowing just 380 total yards and holding Isaiah Hodgins, one of the nation’s best receivers, to just eight catches for 85 yards, all in the second half.

The Beavers received some bad news even before the game began as they learned quarterback Jake Luton would not be available due to a forearm strain. In his absence, sophomore Tristan Grebbia filled him and did what any back up quarterback hopes to do. He gave his team a chance to win the game and the Beavers had a great chance.

It was just a one-possession contest when Oregon State took over on their own 27 with two timeouts left and 2:22 left on the clock. The Beavers had scored its first touchdown with 11 minutes to go to make it 17-10 and all the momentum in the world.

After incompletion that was almost an interception, that turnover came just one play later when Grebbia completed a pass to Jermar Jefferson. He had eight yards with the catch, but when he turned upfield, Jefferson tired to hurdle a defender and that’s when the ball came loose. It bounced up perfectly, as if it was a basketball, into Brady Breeze’s arms with 2:11 left and the Beavers had just one timeout left.

“That was just an indication of how those guys played the entire evening,” Oregon coach Mario Cristobal said of his defense that also got a key fourth down stop on the Beavers’ earlier possession. “You always saw 11 hats getting to the football. The communication level, the way they practiced this week and all the things they did, to play at this level today, was really impressive to watch. Those guys will tell you they have a lot more football left in them.”

All Oregon needed was a first down, but Habibi-Likio not only moved the chains, he scored.

It looked like the Ducks had scored the potential game-winning touchdown with eight minutes left. They were in the midst of their best drive of the game, going 70 yards in nine plays that featured Herbert scrambling for big yards a couple of times. But when Jaylon Redd dove for the pylon, the ball came out of his hand inches from the orange marker, causing a touchback for the Beaver defense.

Maintaining and finishing drives were far from being a common occurrence for the Duck offense in unusually frigid weather in Eugene. Oregon could only muster up 365 total yards. Herbert didn’t have a banner day in his last appearance in Autzen. The senior from Eugene was 18-of-30 for 174 yards and a touchdown. More importantly, however, he got the win.

“We weren’t very efficient today and we had been throughout the course of the year,” Cristobal said. “It’s not up to our standard and we got to get back to work and get better at it.”

Herbert’s lone touchdown pass came in early in the second quarter when he found Johnny Johnson III on an out pattern and with a perfect strike, the Ducks scored from 28 yards out to make it 17-3.

Herbert’s counterpart on the OSU sideline, Grebbia, was 26-of-40 passing for 243 yards. It was a gutsy performance in his first Civil War experience. He drove the Beavers 63 yards down the field on 12 plays on their first drive of the game the resulted in a 40-yard field goal to make it 3-3 with three minutes left in the first quarter.

The tie lasted just 13 seconds as Mychal Wright scored Oregon’s first touchdown on a 98-yard kickoff return down the left hash. The freshman read his blockers perfectly, made one cut and he was gone.

With the lead back, the Duck defense adjusted, changed up looks and kept Grebbia guessing. Shutting down the Beaver run game helped also. Oregon State gained just 137 yards on the ground.

“You can’t completely overhaul the things we practiced all week on and expect to have success because you can get attacked in other ways,” Cristobal said. “I thought after the first couple series, Coach (Andy) Avalos and his staff got a pretty good feel of what they were going to do.”

With the loss, the Beavers fell to 5-7 overall and just win away from being bowl eligible. But those five wins might be three more than what most expected as coach Jonathan Smith is trying to build a program that had a bare cupboard just two seasons ago.

Now Oregon will face Utah on Friday. With the win, the Ducks will be Pac-12 champs and another Rose Bowl appearance. Even with a loss, Oregon could still go to Pasadena if Utah is elevated to the playoff.

The Ducks and Utes kickoff at 5 pm on ABC.