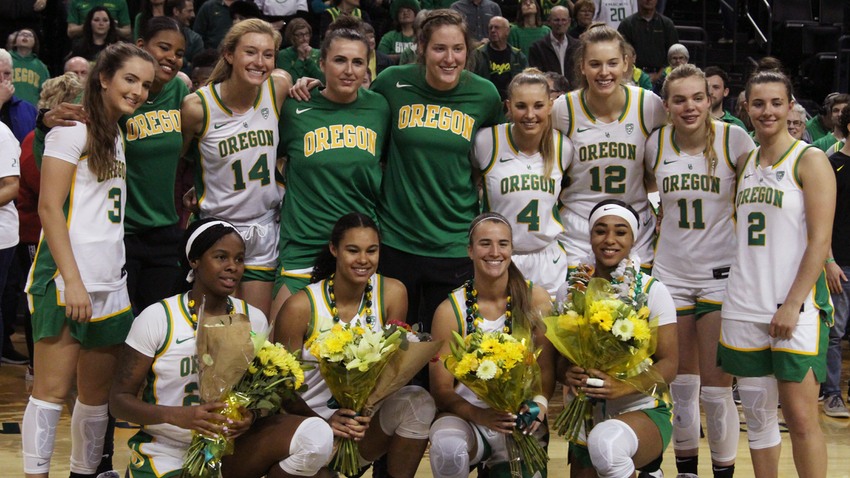 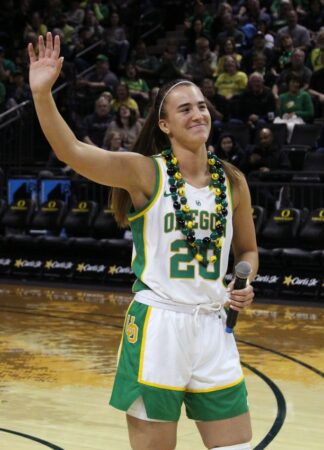 A usual outcome on a special day.

In front of a sold out Matthew Knight Arena of 12,364, the Oregon women’s basketball team dismantled Washington on Senior Day to close out the regular season.

But this season is far from over.

The Ducks defeated the Huskies 92-56 as almost an afterthought as today was more for celebrating four seniors that has had significant impacts on the program in very different ways.

First, for the nuts and bolts of the game.

With the win, the Ducks finished the regular season 28-2 overall and 17-1 in conference play. Washington ended its season 5-13 in league action and 13-16 overall as both teams will now travel down to Vegas and compete in the Pac-12 tournament next week.

Sabrina Ionescu didn’t have her best game ever with just 13 points, 11 assists and four rebounds. It goes to how good she has been over the course of her storied career as those numbers would probably be a banner day for 95 percent of the players in the country.

Taylor Chavez came off the bench and possibly had her most complete game of the season with 14 points and four rebounds in just 18 minutes of floor time.

Minyon Moore also had a good day offensively with 11 points, five rebounds and six assists. The senior transfer from USC was also a pest defensively, getting into passing lanes and disrupting the Washington offense.

Oregon has been used to coming off to quick starts and putting opponents away quickly. They went on a 13-0 run to start the game against WSU two nights ago, but today was a different story.

The Ducks just waited until the second quarter to put the Huskies in the dog house.

After leading just 19-18 after the first 10 minutes of action, Oregon outscored Washington 27-6 in the second quarter and ended the half on a 17-0 run to go into the locker room with a 46-24 lead.

It was more of the same in the second half as the Ducks never let the Huskies back into the game. Their biggest lead came at the 5:40 mark of the fourth quarter when Ionescu hit a three to make it 87-49.

Oregon’s offense definitely did its thing, but the defense completely stifled what Washington wanted to do. The game plan was obviously not letting Amber Melgoza do what she wanted and the Ducks didn’t.

The Washington guard almost single-handedly beat the Beavers Friday night with her 34 points. But against the No. 3 team in the nation, the senior finished with 10 points on 3-of-13 from the field.

Although it was Senior Day, Oregon fans will get to watch the Ducks plays at home two more times in the NCAA tournament in three weeks. Their almost assured the No. 1 seed in the Portland Region, no matter what might happen in the conference tournament. Oregon’s Road to the Final Four will begin inside Matthew Knight Arena, a place that four special players made home.

The Ducks were in the 130s last season in defensive efficiency, but that all chanced when Moore decided to leave the Trojans and come to Eugene with a chance at a national title. Now the Ducks are in the 30s in that particular metric and it shows. Moore’s tenacity on the defensive end to harass the opponent as led to steals and unforced turnovers, which lead to even moore baskets on the other end.

Sabally came to Eugene already as a very talented player, but in her three years playing in Kelly Graves’ system, the 6-4 post that moves like a guard has turned herself into a Top 5 pick in the WNBA draft and could be the catalyst to the Ducks possibly winning the national title.

Not many Oregon athletes can be known by just their first names. Luke and Luke, Freddie, Marcus. But add two more names to that list. It’s either been Ruthy and Sabrina or Sabrina and Ruthy for the past four seasons of a era of Ducks women’s basketball that may never come again.

Hebard would have been THE star recruit for any other school that also didn’t recruit Ionescu in that same class. She will end her career as Oregon’s best post player of all-time and they better make her plaque in the Duck and Pac-12 Hall of Fames. She’ll finish with over 2,400 points and 1,400 rebounds.

As for Ionescu, or the GOAT, she is the face of not only women’s athletics at Oregon, but she has changed what most thought a women’s basketball player could accomplish. She is the only player, both men or women, to have 2,000 points, 1,000 assists and 1,000 rebounds. She’ll also have a plaque in several Halls of Fame by the time she’s done. But Ionescu would give all that up if she can finish that “Unfinished Business” she was talking about when she decided to come back for her senior season.

She won’t be satisfied until the Ducks get to hang their one and only national championship banner for women’s basketball in those rafters.