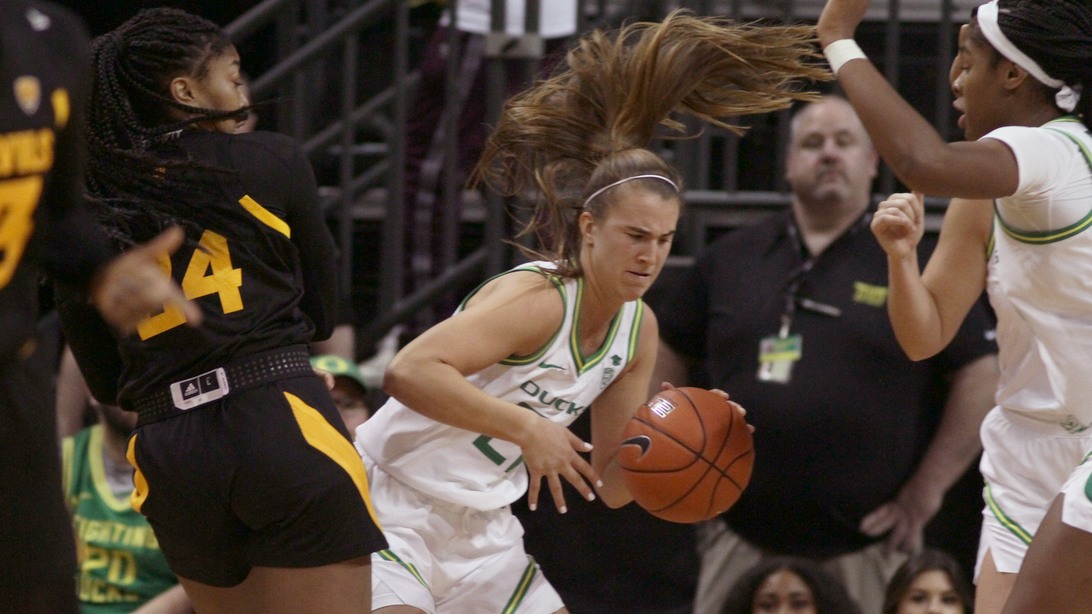 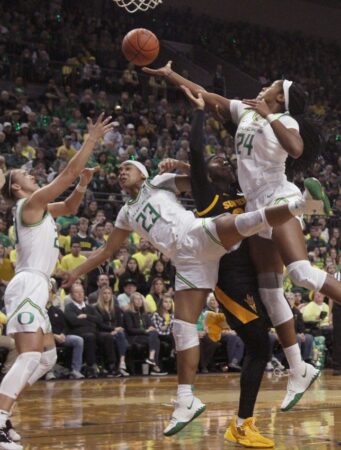 A full house showed up at Matthew Knight Arena on Sunday afternoon to watch the 3rd-ranked Oregon Ducks seek to repay the Sun Devils for the only blemish on their Pac-12 record – a 72-66 loss in Tempe one month ago.

What the 12.364 in attendance saw in Oregon’s 79-48 victory more closely resembled a rugby scrum than it did a basketball game. From the opening tip collisions and whistles were the norm; neither offense could find traction as evidenced by the 10-2 score after one.

Scoreless until Arizona State (16-8, 6-6) broke the ice nearly five minutes into the affair, Oregon took the lead on a Sabrina Ionescu free throw which she followed up with a trey – a lead the Ducks would never relinquish but struggled to expand.

The next 10 minutes weren’t much prettier. Oregon pushed the margin to 18-4 five minutes into the second quarter when freshman Jaz Shelley buried a three, then recorded a steal and an assist on Ionescu’s trey.

Nothing else came easy and Oregon took a decidedly frustrating 27-15 lead into the break.

The tenor changed for the Ducks early in the third, scoring on seven straight possessions to put the Sun Devils in the rear view mirror once and for all.

Five Ducks scored in double figures with Ionescu’s 19 points leading the way. Shelley and Erin Boley were both effective from behind the arc – Shelley going a perfect four for four while Boley – who has scuffled with her shot of late – buried four of six attempts, each finishing with 14 points. Satou Sabally and Ruthy Hebard each added 11.

“It was definitely a revenge game for us,” said Shelley. “We knew we were the better team and we shouldn’t have lost that game, so we had a fire in our belly.”

Once again kudos are due to the Oregon defense which forced Arizona State into 18 turnovers and didn’t allow a Sun Devil to reach 10 points – Ja’Tavia Tapley and Eboni Walker each scored 8 to tie for the team lead.

“We have a 10-game winning streak, and a big reason why is our defense,” Graves said. “I thought Minyon (Moore) was on point. … she had six steals. That kid comes in and changes the whole game, she puts so much pressure on them defensively they can never really get in sync.”

A tough four game road swing now awaits. Oregon (20-2, 11-1) first heads to Los Angles to tangle with the 10th-ranked UCLA Bruins at 8:00 pm on Friday, then crosses town to face USC on Sunday at 1:00 pm. Both games will be carried on the Pac-12 Networks.

The Ducks will close out the regular season hosting Washington State at 8:00pm on Friday, February 28th followed by the Washington Huskies on Sunday, March 1st at 12:00 pm.