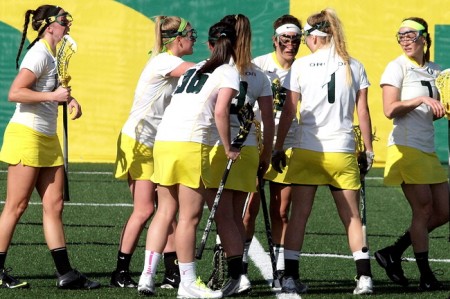 Olivia Payne scoered the opening two goals to give the Oregon Ducks an early2-0 lead on their way to a 8-6 victory over the George Washington Colonials Tuesday evening at Pape` Field.

Holly Johnson and Carly O’Connell added fuel to the early attack, stretching the lead to 4-0 with a goal each.

The Colonials narrowed the gap to 4-3 in short order however with three straight goals from Rachel Mia and that was the margin at the half.

Oregon returned the favor to open the second half with Hayley Milner striking first then Courtney Valdez hitting her seventh and eight markers of the season to stretch the Oregon lead to 7-3.

Again the Colonials rallied, beating Oregon keep Janelle Parker twice in the span of three minutes but Parker steadied herself to earn her fourth win of the season. She was credited with five saves in 60 minutes of playing time.

O’Connell’s second goal of the game at 16:40 – her ninth of the year – sealed the win for the Ducks who now find themselves at 4-1 on the season and in position to add to that early success in a Friday evening match at Pape` Field against Robert Morris. The opening draw is scheduled for 5:00 pm.