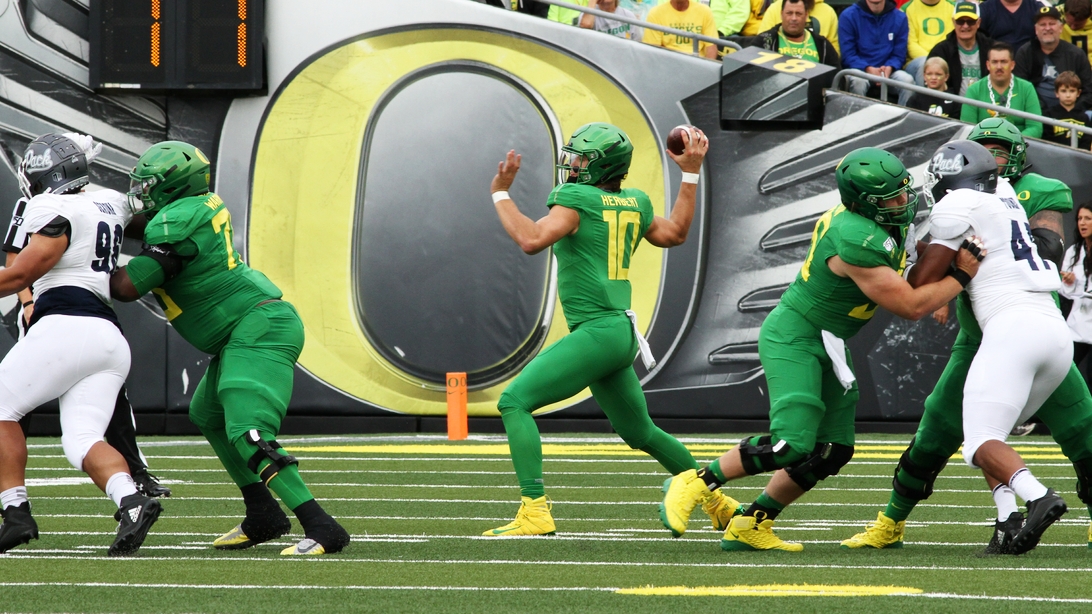 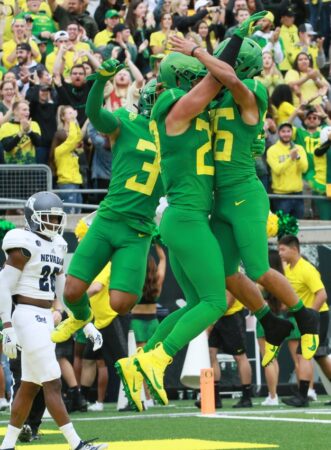 In order for Nevada to come into Autzen and upset the No. 16 Ducks, it had to play very well. Not perfect, but very well.

Neither of that happened and Oregon exploded for 28 points in the second quarter on its way to an easy 77-6 win in front of 50,920 fans for the first victory of the season.

“We played a complete game in all phases. I thought the defense was the determining factor of holding momentum,” Oregon coach Mario Cristobal said. “When the younger guys went in, they were held accountable to a certain standard.”

Early on, the Wolfpack hung in there with the Ducks as Oregon took a while to find its offensive rhythm. It took the Ducks about 12 minutes of game action to find that rhythm, but once they did, Nevada never had a chance.

But in the early moments of the contest, it was all Wolfpack.

Justin Herbert was missing receivers left and right and a botched punt return led to an early 25-yard field goal.

The senior quarterback finally managed to hit a streaking Jacob Breeland down the right seam for a 66-yard touchdown for a 7-3 lead. Everything seemed to settle down from there.

Nevada did briefly make it a 7-6 score midway through the second quarter, but then the offensive floodgates opened.

Herbert found Breeland for a 31-yard reception and then Bryan Addison for a 34-yard reception, both over the middle, to reach the two-yard line. CJ Verdell punched it in from there and the Ducks led 14-6 with 8:28 left.

Oregon’s next score was set up when Sampson Niu picked off a pass at the line of scrimmage and the Ducks scored two plays later when Herbert found Ryan bay down the middle, again, for a 16-yard touchdown and the 21-6 lead.

Nevada continued to shoot itself in the foot as the Wolfpack botched a punt that was fumbled on the 6-yard line. Mase Funa decked the punter, causing him to cough it up, and Kayvon Thibodeaux was there to recover.

The Ducks took just four plays and 1:24 on the clock to score. Herbert found Brady Aiello, who is usually a lineman, but switched jerseys to be an eligible receiver, for a 1-yard touchdown reception in the back of the end zone and the 28-6 lead.

Oregon managed to score one more time with just 12 seconds left before halftime. It took the offense just 1:23 to go 77 yards with Addison scoring on a 24-yard reception down the right sideline. He put one move on the cornerback and found himself wide open. All Herbert had to do was to loft the ball to the redshirt freshman for the easy score and the 35-6 halftime lead.

It was more of the same in the third quarter for the Wolfpack.

They were held on a three-and-out in just 1:32, which led to another Oregon scoring drive. This time, it was a 10-play, 75-yard drive that took a little over three minutes. Herbert found Daewood Davis on a corner route to the end zone with a 16-yard strike. Davis was plunged into receiver duty after a rash of injuries at that position, but it wasn’t noticed on this night.

“Daewood has shown in practice that he was ready to play,” Cristobal said. “A lot of guys have stepped up with the injury situation we have. We need to continue to stretch the field with the tight ends.

The sophomore entered the season as a cornerback, but unless something drastic happens, Davis might has seen his days on the defense end.

It was 42-6 at this point and the game was well in hand. That didn’t stop the Oregon defense from making plays.

That drive also ended Herbert’s night as he went 19-of-26 for 310 yards, five touchdowns and zero interceptions. His favorite target was Breeland, who finished the home opener with four catches, 112 yards and a touchdown.

Niu recovered a fumble on the Wolfpack 22 to set up 4-play, 22-yard touchdown drive that consisted of four Cyrus Habibi-Likio rushes.

Nevada quarterback Carson Strong was then picked off on the first play of the ensuing drive by Steven Stephens. He rambled down to the Nevada five-yard line and Tyler Shough found Jaylon Webb on a 7-yard touchdown reception and the 56-6 lead.

After both teams exchanged punts, Oregon caused yet another turnover when DJ Johnson forced a fumble and Brady Breeze calmly picked up the ball and ran 11 yards into the end zone and the touchdown to make it 63-6.

Johnson led the Ducks with seven tackles, six of them solo.

It was Nevada’s fourth turnover of the game and all four miscues directly led to Oregon touchdowns.

Just to make sure that route down the seam wasn’t a fluke over and over, Shough found tight end Hunter Kampmoyer on a 21-yard touchdown and the 70-6 lead. It was the seventh touchdown pass, which tied a team record.

Darrian Felix’s 62-yard jaunt ended the scoring with 2:02 left. That big run made Felix the rushing leader for the game with 80 yards on eight carries. Verdell finished with 60 yards on 11 carries.

The 77 points sets the Autzen record for points by the Ducks, which was set in 2017 against Southern Utah.

Oregon will return to action next week with a 7:45 pm date with Montana televised on the Pac-12 Network.