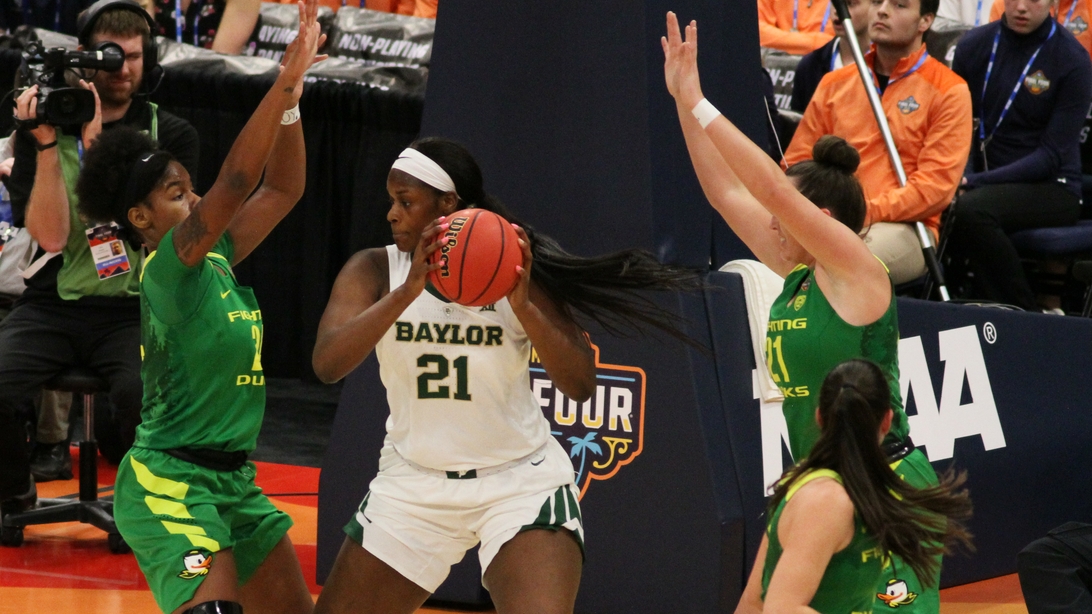 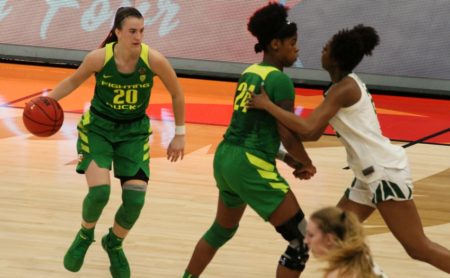 The dream season might have ended, but the Duck women’s basketball team has absolutely no reason to hang their heads.

In its first ever Final Four appearance, Oregon played neck and neck with the No. 1 overall seed Baylor for 38 minutes.  Unfortunately, it’s a 40-minute game and the Bears escaped with a 72-67 win over the Pac-12 champions.

Satou Sabally’s three-pointer with 1:40 left tied the game at 67-67, but that was Oregon’s last shot made as it ended the game one of their last 13 from the field.

That three was Sabally’s third of the game and the team’s 12th from long distance. Oregon was 12-of-32 from behind the arc and that was the only offensive weapon that was working. A 6-7 Kalani Brown and 6-4 Lauren Cox will do that to what is otherwise an explosive offense.

Chloe Jackson managed to penetrate the defense and lay it in to give Baylor a 69-67 lead with a minute left. Sabally, who played with foul trouble for most of the night, had an open look from 17 feet with 35 seconds remaining, but the shot rimmed out.

Cox was fouled and calmly made both foul shots for the four-point lead with 18 seconds on the clock.

After a timeout, Sabrina Ionescu and Sabally each missed threes before Baylor was able to corral the rebound. Brown made 1-of-2 shots from the charity stripe and that was it.

If this was somehow Ionescu’s last game as a Duck, she did almost everything possible to will her team to what would have been the Ducks’ biggest win ever. The junior is eligible for the WNBA draft next week if she chooses to leave early.

Ionescu led Oregon with 18 points, six assists and four rebounds. But Baylor coach Kim Mulkey’s defense made it very tough for the Pac-12 Player of the Year as she was 6-of-24 from the field.

As a team, Oregon was just 25-of-68 (37 percent) from the field. The Bears’ two big post players made it especially tough on Ruthy Hebard, who could only score four points and she brought down nine boards.

It was the Brown and Cox Show for Baylor, as expected. Brown scored 22 and Cox added 21, but it was Didi Richards’ 15 points that hurt Oregon. She was 6-of-10 from the field on mostly 12-footers when the Duck defense collapsed around the bigger post players.

Baylor shot 31-of-57 from the field for 54 percent. The Bears were 0-for-3 from long range and still won the game.

For playing in their first ever national semifinal, the Ducks can be happy with how they played. It was a back-and-forth game for the entire 40 minutes of action. Neither team had a bigger lead than five points. There was 12 lead changes and the contest was tied 12 different times.

After falling behind 19-15 in the first quarter, the Ducks put together their best 10 minutes of the game and took a 34-33 halftime lead. Oregon’s best highlight came at the end of the second quarter when Ionescu was fouled while making a three-pointer with 7.7 seconds left before halftime.

Even if Ionescu decides to leave early, Oregon will be one of the top teams in the Pac-12 and the country. If she decides to come back for her senior season, the Ducks will be a favorite to win the national title.

But Oregon will severely miss seniors Maite Cazorla and Oti Gildon, the program’s all-time winningest players. Graves will have to find a point guard to replace Cazorla and a post player who can match Gildon’s toughness.

Everyone else is expected to return and Oregon will receive a huge addition in Nyara Sabally, Satou’s little sister. Also 6-4, the younger Sabally had to sit out this season with a knee injury.

They’ll also have Taylor Chavez play a bigger role next year. The shooting guard missed the last two games of the regular season and the entire postseason due to a foot injury.

A lot of the 2019-20 roster and season’s outcome will be determined in the next 48 hours. That’s how long Ionescu has to decide, if she hasn’t already, to return to Eugene or not.

The WNBA draft is April 10 and the Oregon star is expected to be the No. 1 pick. The Las Vegas Aces just so happens to have that top pick and they would love to someone of Ionescu’s caliber running the show.

For Oregon, however, the Ducks hope she’s not done calling Eugene home quite yet.