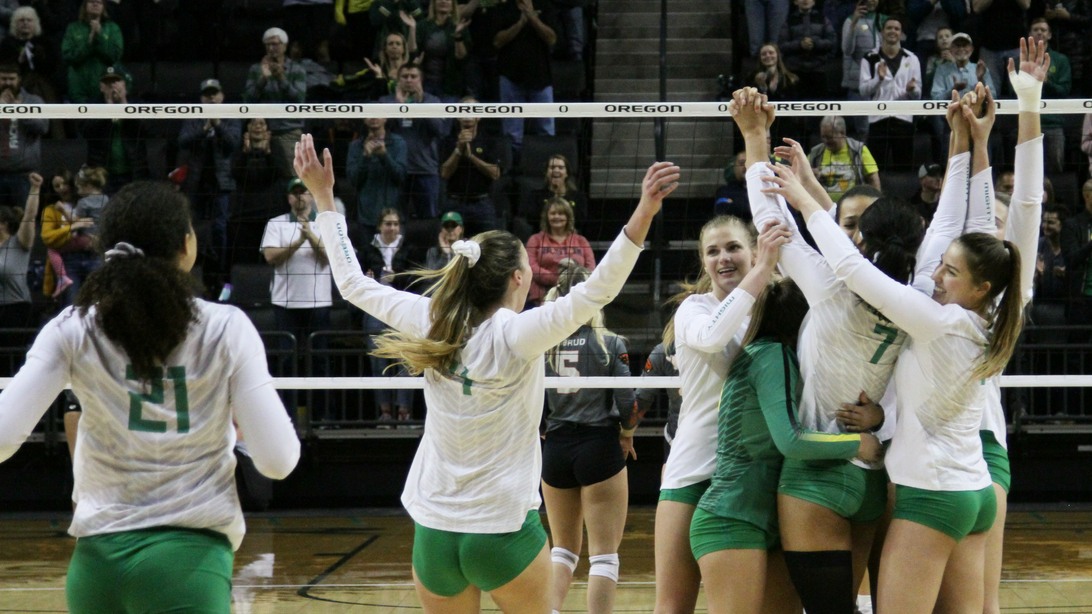 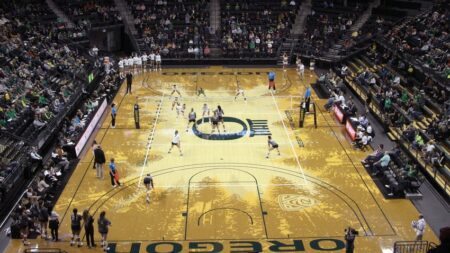 Certain to be inducted into the University of Oregon athletic hall of fame the instant they become eligible Willow Johnson and Ronika Stone closed out their collegiate careers with a four set victory over the Oregon State Beavers (23-25, 25-23, 25-20, 25-15) Friday evening at Matthew Knight Arena.

The only two seniors on a young team that took its lumps over the course of the season each put a nice exclamation point on their tenure wearing green and yellow. Stone led the team with 16 kills and seven blocks, Johnson right beside her with 14 and six.

Johnson’s third kill gave her 1000 over the course of her career and Stone will leave with the program record for both block assists (429) and hitting percentage (.336).

“From the first serve I was locked in,” Johnson said of dealing with the emotion of senior day celebrations. Perhaps but it was the Beavers who struck first. Oregon held a three point advantage as late as 18-15 but tied at 23, gave up two straight points and the set belonged to Oregon State.

Oregon was better down the stretch in set two, holding off a three point Oregon State rally after leading 24-20 to even the match at one.

A six point run gave the Ducks a lead midway through the third set, then Oregon seized control of the match winning four straight points at 21-20, taking the 2-1 set advantage.

Twice Oregon was able to string together four consecutive points in the third set, the last for a 22-14 advantage and while Johnson and Stone shared smiles and hugs with teammates, the Ducks closed out the match with three straight points.

With a final record of 9-22 overall and 3-17 in Pac-12, the Ducks will miss the NCAA tournament  for the first time since 2010 though both Stone and Johnson expressed confidence the youngsters they mentored this season will make Oregon’s absence a short one.

“They’ve grown so much,” Stone enthused about the seven true freshmen, three redshirt freshmen and one sophomore that filled out the Oregon roster in 2019. “… They are so young. I think this just showed how good they can be. So many people stepped up in big moments.”

“I’m sad I have to move on to the next chapter, but I’m so excited about where this program’s going,” said Johnson

It is expected that senior Taylor Borup will be granted a medical clearance for 2020 to add to what will still be a young but now battle tested roster.