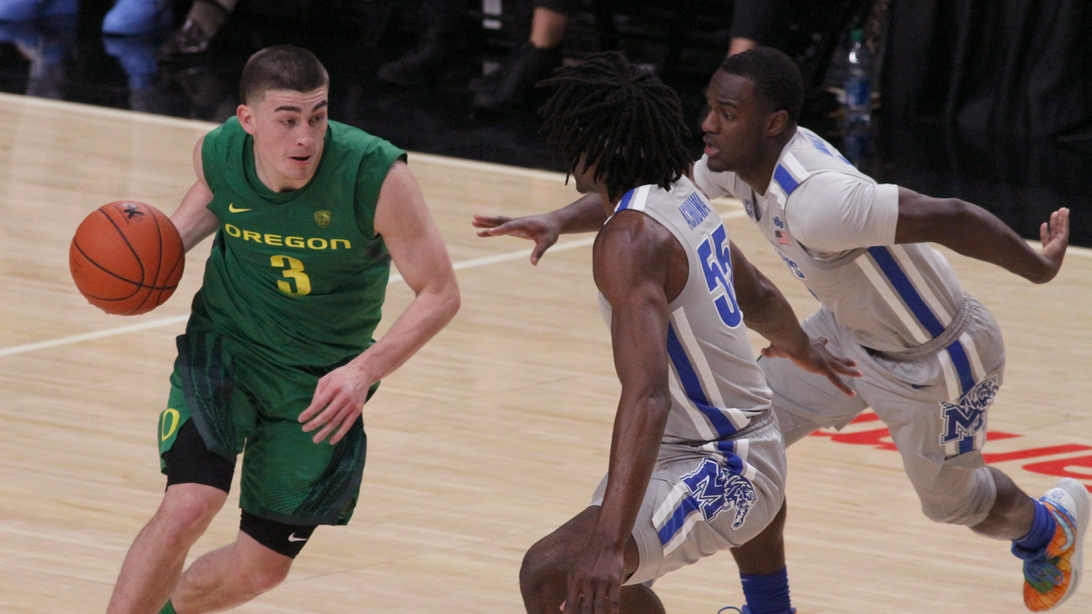 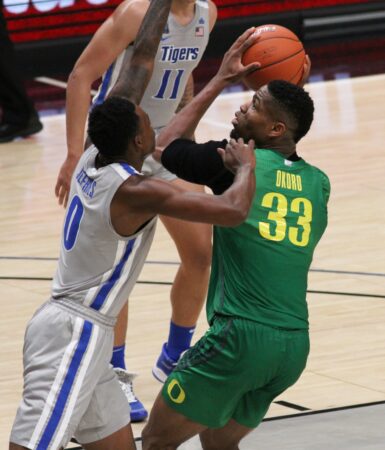 Memphis came into Portland and the PK Invitational with all the storylines. The No. 1 recruiting class, the famous player as coach and the NCAA breathing down their neck concerning the eligibility of James Wiseman.

The Ducks just came into the game looking for a victory and they got it.

No. 15 Oregon played a complete 40 minutes and took an 82-74 victory over the No. 14 Tigers in what could be a huge resume game when seeding is figured out in March Madness.

Shakur Juiston scored 17 points and 10 rebounds in his first and what figures to be many double-doubles of the season and Payton Pritchard added 14 points, six assists and four rebounds.

Anthony Mathis poured in 12 points and Will Richardson scored 10 to go along with six assists. The sophomore point guard also hit a couple of threes late in the game to extend the Duck lead at crucial times.

Francis Okoro returned to the lineup after missing the Boise State game a few days ago to score seven and bring down nine rebounds. It’s a minor miracle the sophomore post returned to game action so soon after getting hit by a car while crossing the street just outside Matthew Knight Arena.

The 6-9, 235-pounder was a physical presence on the inside that intimidated Memphis enough to think twice about dribbling the ball in the lane. When the Tigers did go inside, Okoro altered shots, kept rebounds alive and grabbed a few boards on the offensive side for some put backs.

Oregon and Memphis were neck-and-neck for most of this game, but the Ducks maintained the lead for 37 of the 40 minutes and held a 41-35 halftime lead.

Wiseman was in foul trouble in the first half and just had two points at the break, but when he came back into the game in the second half, the Tigers were able to grab a brief 49-48 lead on Lester Quinones’ corner three.

But the Ducks took the lead right back on Juison’s lay-in on a drive. That started a 9-0 Oregon run and although the Tigers pulled to within four a few times, the Tigers never made it a one-possession game.

Memphis was having a difficult time finding open shots on a consistent basis. Overall, the Tigers were 26-of-69 from the field (38 percent) and just 4-of-23 from long range. Wiseman did end up with 14 points and 12 rebounds. Quinones led Memphis with 16.

Oregon shot the ball a lot better, going 29-of-60 from the field (48 percent) and the Ducks sank 9-of-23 from the three-point stripe. Memphis did outrebound the Ducks 41-39, but just staying that close on the boards for the smaller Oregon team could be considered a win.

Head coach Dana Altman won’t be happy with the 18 turnovers, but something he can be happy with is Chris Duarte’s season doesn’t look to be derailed.

In a scary moment in the first half, Duarte collided with a Memphis player and the two banged knees. Oregon’s junior guard suffered the worst of it as he was carried into the locker room. He did, however, come back to start the second half with a wrap on his knee. After a few minutes, the Ducks decided to hold Duarte out and let him rest.

Oregon passed its first true test of the season in what might be the Ducks’ toughest November ever. They will return home to Eugene Sunday to face UT-Arlington. The Mavericks finished 17-16 last season and were one win away from a Sun Belt title and an automatic NCAA berth. They are 2-0 this season with a win over Tulsa.