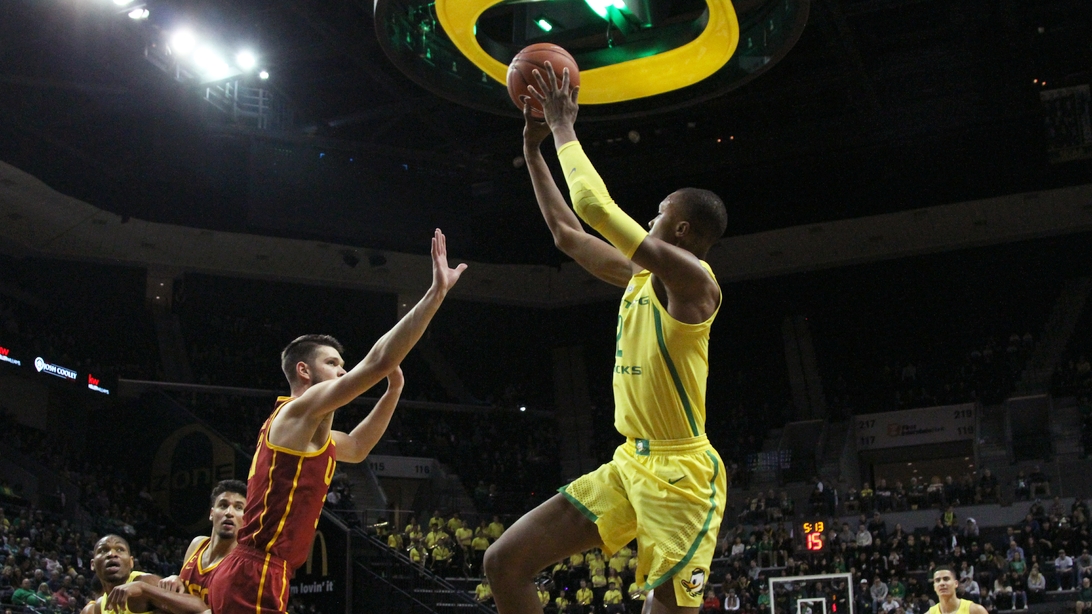 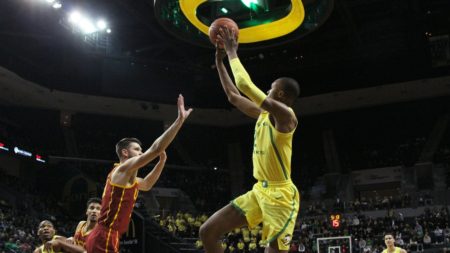 Given the adversity they’ve faced with the injuries and then the last minute collapse against UCLA three days ago, the Ducks could have easily decided to fold up the tent on the season.

But instead, Oregon showed some resiliency and buckled down on the defensive side of the floor.

The Ducks ran away from USC 81-60 to capture their first conference win of the season in front of 8,148 inside Matthew Knight Arena. Oregon improved to 10-6 overall and 1-2 in Pac-12 play, while USC fell to 9-8 overall and 2-2 in conference action.

It was quite the difference from a few days ago when Oregon blew a 13-point lead in the last 90 seconds of regulation before losing in overtime. USC wouldn’t have the chance for such a rally.

The Trojans would have had to make some threes, something that eluded them the entire night. USC was just 5-of-18 from long range and just 23-of-54 (42.6 percent) from the field.

On the other side of the floor, the Ducks were red hot from the field for the whole night. Oregon were 56 percent from the field on 29-of-52 shooting, including 13-of-24 from long range.

Louis King and Paul White each led the Ducks with 19 points apiece, while Will Richardson added 11 and Victor Bailey, Jr. scored 10.

Besides the defense, the Ducks crashed the boards big time, outrebounding the Trojans by a 35-24 margin. Oregon also had 17 second-chance points on just eight offensive rebounds.

Oregon took control of the game right away by building an early 12-4 lead and a 36-28 halftime time. Although the lead was eight, the Ducks probably went into the locker room feeling as though that lead should have been a lot bigger. The Trojans managed to go on a 7-0 run to end the first half to bring themselves to within shouting distance.

USC was a far cry from the team that took Oregon State to overtime before falling 79-74. Bennie Boatright scored 37 points against the Beavers, but the Ducks held the senior guard to just 13 points on 4-of-9 shooting from the field. Jonah Mathews led the Trojans with 15 points.

Now with the season not completely in the dumpster, and it very well could have been if the Ducks had lost their third straight home game, Oregon now sees some light as they head to Arizona next weekend.

Arizona is not nearly the team they once were despite what its record says and Arizona State is inconsistent at best. But this season, every single Pac-12 team could be described in that matter.