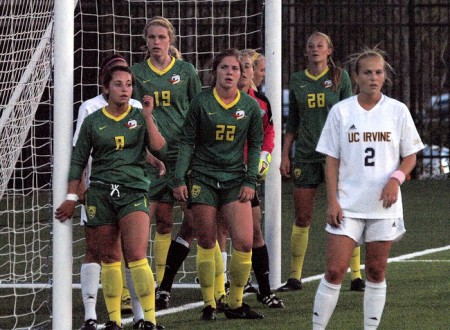 The University of Oregon women’s soccer team overcame a physical UC Irvine club for a 1-0 victory under the lights at Pape Field Friday night. 792 fans came out to support the Ducks, and watch yet another freshmen lead the Ducks to victory. Maryn Beutler drove the ball into the back of net, sailing it over numerous Anteaters and Ducks down on the pitch for the winning goal. It was the perfect example of this physical game, and how the scrappy Ducks overcame to get their second consecutive win.

The early momentum went back and forth between the Anteaters from Irvine and the Ducks. The Anteaters set the early precedent with their size and strength through the midfield. The Ducks were thrown off and showed some frustration with eight offsides and 11 total fouls, both of which were more than the Anteaters. The Ducks used persistent ball pressure to win the ball, but over aggression and sloppy clearances also left the door open for the Anteaters to create chances.

On numerous occasions the Anteaters let opportunities slip away. One header hit off the crossbar off a beautiful corner kick setup, and Abby Steel closed the door on the rest of the Anteaters early chances. Senior Steel finished with only two saves, but was kept busy for most of the night.

Near the end of the half the Ducks seemed to gain the momentum, and their speed and depth kept the Anteaters on their heels. Freshmen Mariah Powers and sophomore Kyomi Cook did a great job pushing the action from the left and right back positions. Their athleticism was a huge key for the Ducks in keeping the pressure on the Anteaters.

It was yet another freshmen, Brooke Strawn, whose play inspired the Ducks at the end of the first half. She tackled the ball off an Anteater near midfield, then popped up and got a pass back to attack the defense. She beat one defender and put a long shot on goal from near 30 yards out, forcing Anteater goalie Jennifer Randazoo into a beautiful laid out save. “We used it twice as an example in halftime” said Erickson referencing Strawns play, “anytime Brooke gets stuck in on a tackle, it kinda excites a lot of people, because she brings such a physical presence to the game.” These freshmen continue to bring a confident attitude to the pitch and back it up with their tenacious play.

The Ducks stepped onto the pitch with a different aura of confidence and seized the early momentum for the second half. The Ducks’ speed– which had been kept at bay for the most part in the first half– began to show through. Sophomore Bri Pugh, coming back from injury, played well and was very successful creating chances for herself and her teammates.

The winning goal came in the 68th minute, as senior Scout Libke setup a persistent  Achijah Berry for an excellent chance. Once again Anteater goalie Randazzo was there, but this time she couldn’t get the ball cleared. A melee ensued in the six yard box, and the other freshmen from Bend, Maryn Beutler, took advantage of her second chance of the game. “It just popped out to me and I put it in” Beutler said of her first collegiate goal “It was sweet, it was a good first goal.”

The Anteaters had successfully used their size to throw off the Ducks quick paced passing attack, and disrupted the timing of runs all night long. Early in the game the Ducks had tried some longer setup passes, trying to go over the top of a stout Anteater defense.  In the end, it was Oregon’s tenacity that led to the only goal of the game and the victory.

The Ducks had the weather a late storm from the Anteaters, one chance bending wide of an open net. In the end, coach Tara Erickson played 20 different players and it was the fresh legs the helped the Ducks seal the victory. “Our depth showed again” said Erickson after the game.

Now 3-1, the Ducks next take to I-5 south for weekend road games vs Pacific on Saturday the 8th and St. Mary’s on Sunday the 9th. Hoping to continue the momentum from these two consecutive victories, the Ducks will continue to rely on their speed and depth to be successful this season. Coach Tara Erickson may want to pick up recruiting in Bend, Oregon as that’s where all their goals are coming from.