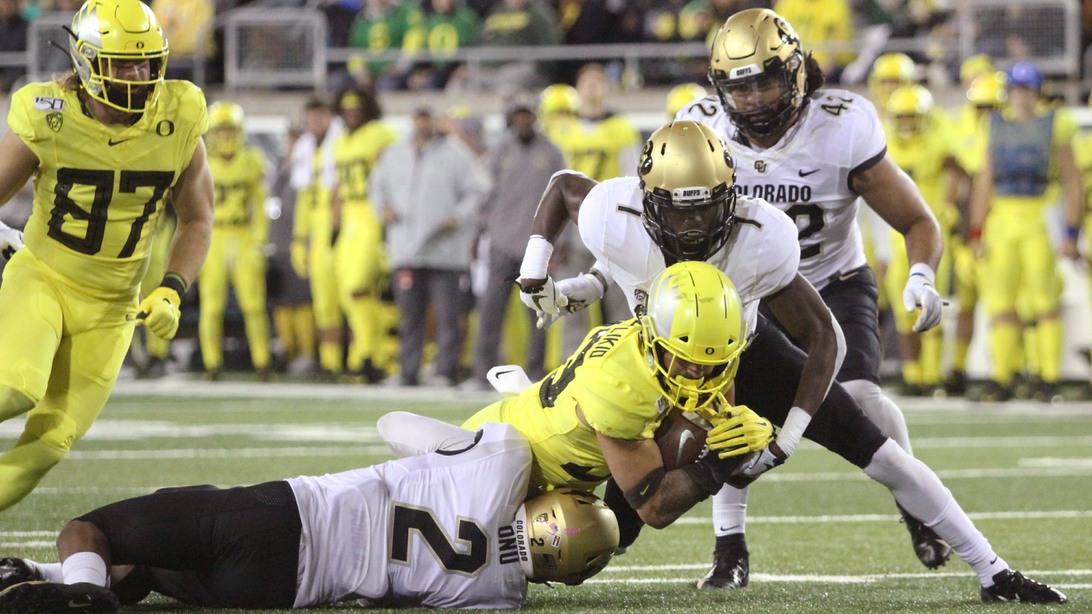 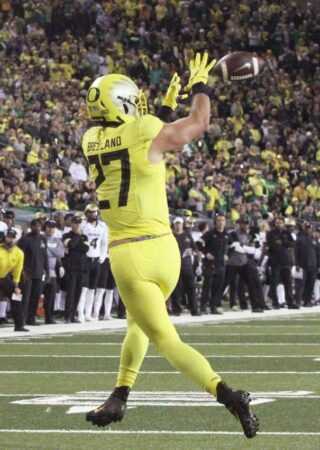 Steven Montez had something very few visiting quarterbacks have when it comes to Autzen Stadium.

When Montez was a freshman back in 2016, his first start came in Eugene in front of a raucous crowd that he was delighted in silencing and an upset win.

Just the opposite occurred tonight.

Montez was held to just 131 yards passing and was picked off four times as No. 13 Oregon crushed Colorado 45-3 in front of 50,529 fans on a rare Friday night contest.

“The guy is a great football player. The key is to affect the quarterback. And when they couldn’t there, the discipline of our back end made it difficult for him,” Oregon head coach Mario Cristobal said.

Not allowing the opponent to score a touchdown inside Autzen is becoming a habit. California managed to find the end zone one time last week and that is still the only touchdown Oregon has allowed at home.

It’s also the first time since 1958 the Ducks have held five consecutive opponents under 10 points. That streak will be in jeopardy when Oregon travels to Seattle next week, but for now, Oregon will have an extra day to celebrate what was an impressive all-around performance.

Verone McKinley III picked off Montez twice, one coming at the tail end of the first half and then again in the third quarter that almost went to the house. His first interception was a circus act as he caught a tipped ball and kept his toe on the ground has he made the pick in the end zone for a touchback.

His second interception was a bit easier as Montez threw the ball right at him and thankfully for the Ducks, McKinley knew what to do with it. He was able to return the ball 53 yards down to the 7-yard line to set up Cyrus Habibi-Likio’s second touchdown to make it 38-3.

But realistically, the game was over long before that.

After taking a 24-3 halftime lead, the Ducks quickly made it 31-3 on Justin Herbert’s 13-yard scoring pass to Jaylon Redd down the middle of the field. That quick drive was set up when Bryson Young picked off Montez on the second play of the second half.

Against this defense, a 24-point lead might as well be a 48-point lead.

While the defense was its usual dominating self, the Oregon offense showed it had some explosiveness to it and a running game.

Herbert finished the game 18-for-32 for 261 yards and two touchdowns. But it was the running attack and the offensive line that proved to be too tough for the Buffaloes to handle.

CJ Verdell led the Ducks with a season-high 171 yards, including 70 yards on one play. Oregon rushed for 252 yards and outgained Colorado 527-299.

Herbert was able to spread the wealth around to his receivers as Redd led everyone with four catches and 75 yards with that one touchdown. Mycah Pittman added three catches for 57 yards. Herbert’s favorite target, Jacob Breeland, was injured in the second quarter and he did not return due to an apparent leg injury.

Oregon, or Colorado for that matter, probably never thought the Ducks would be dominating on the field and more importantly, on the scoreboard at the halftime break.

The Ducks held Montez to just 75 yards passing in the first two quarters and the offense was efficient to build a commanding 24-3 lead at the break.

Oregon managed to get its run game in order and that facilitated a passing game the Ducks knew they had in them. Herbert was 16-of-28 in the first half for 225 yards and a touchdown.

That touchdown throw went to Breeland to put the Ducks on the board with their first possession. The 7-yard pass and the score was the tight end’s sixth touchdown of year. Unfortunately, that might have been his last touchdown a long while.

After the Buffaloes’ James Stefanou booted a 27-yard field, Oregon’s Camden Lewis knocked in a 32-yarder of his own for the 10-3 lead early in the second quarter.

Down 17-3, Colorado was on the verge of finally scoring a touchdown, but on a third-and-goal, Montez’s ball was tipped and McKinley made his diving interception with 1:27 left.

“They’re a high powered offense. We didn’t know what to expect,” Cristobal said. “We knew this would be our biggest test. That three minute span was a 21-point swing and that gave us tremendous momentum.”

That was more than enough time for Herbert.

He was able to drive the Ducks down 80 yards in just 67 seconds and Jaylon Redd scored on a sweep from three yards out for the 17-point lead at halftime.

Oregon will now have that extra day to prepare for its first big rivalry game on the season when the Ducks go up to Seattle to take on the Huskies, who have had some unexpected adversity this season. Washington is 4-2 overall, but just 1-2 in league action with a tough road test at Arizona on Saturday.