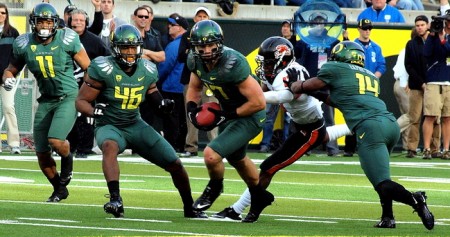 Any running back that does find a crack through Oregon’s defensive front wall will have to deal with one of the best linebacking corps in the country, starting with the 2012 Rose Bowl Defensive MVP Kiko Alonzo. The senior appears to have successfully righted a career that was in serious jeopardy after a pair of off-field issues.

Unleashed against the Badgers, the 6-4, 246 pound Alonso stepped into the spotlight with five tackles, 2.5 of those for a loss and a game-changing interception helping Oregon defeat Wisconsin 45-38 on his way to the MVP award. And in the process Alonso showed the nation an athleticism that nicely blended closing speed, physicality, soft hands and field awareness – he was a monkey wrench right in the middle of the Wisconsin offense.

Joining Alonzo will be another hard-hitter – Michael Clay. At 5-11 and 219 pounds and sure tackler often cited by defensive coordinator Nick Aliotti as the “glue” to his defensive gameplan. One of the best in the conference, Clay led the Ducks in tackles last season with 102 including 13 in the Rose Bowl.

“I’m becoming a leader. I’m the older guy now. People look up to me and come up to me and ask me about the defense,” Clay said. “I had minor surgery in the off-season, so I’ve been working hard to strengthen my lower half. But I feel good now and ready to go.”

Rounding out the linebacker spot in the 4-3 scheme will be all-purpose guy Boseko Lokombo. The 6-3, 225-pounder is the one of the toughest to scheme against. Quick enough to chase down a a quarterback with the best of them, he is also more than capable of slipping back into the pass defense and take away a passing lane. His 40-yard interception return of Stanford quarterback Andrew Luck sealed the deal in the win against the Cardinal. Duck fans will be expecting more of the same in 2012.