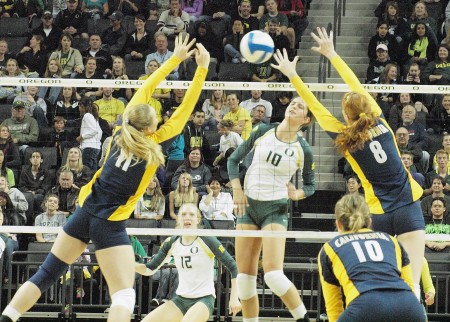 EUGENE – Looking ahead to a record 13 televised volleyball matches this season, the University of Oregon will showcase one of the nation’s most exciting teams on the new Pac-12 National and Regional Networks.

In its 45th season of action, the Ducks sport six home matches and seven away tilts televised in September, October and November (with a complete list of televised dates follows):

Overall, Oregon’s schedule will be another of the nation’s toughest with 12 of its 29 regular season contests vs. 2011 NCAA Tournament returnees.

Under the direction of eighth-year head coach Jim Moore, the Ducks open the season with a pair of three-match tournaments at Ohio State and Ohio University. The season-opening Sports Import Classic in Columbus runs August 24-25 and features Toledo, Houston and Ohio State. A week later, UO takes on Western Carolina, Kentucky and Ohio in Athens, Ohio, September 1-2.

The Ducks then return home for their final non-conference tilts at home vs. UCSB (9/5) and St. Mary’s (9/10), then at Portland State (9/12). Last year, the Gauchos were the Big West runner-up, the Gaels placed third in the West Coast Conference, and the Vikings were the Big Sky runners-up.

The remainder of the team’s schedule will feature 20 matches against all 11 opponents in the nation’s top volleyball league.

A week later, four, four-team Regionals will host the third and fourth rounds on Dec. 6-8 in Austin, Berkeley, Omaha and West Lafayette.

The NCAA Semifinals and Championship then cap the season in Louisville, Kent., on Dec. 13-15.

Two months from now, Oregon fans can get their first sneak peak of this year’s squad in the Green-Yellow Exhibition on Sat., Aug. 11 at Matthew Knight Arena. Another free exhibition vs. many of the Ducks’ greatest alumni follows the next weekend.

The Ducks look ahead to one of their most talented teams after it sported no seniors on last year’s squad (21-10, Pac-12: 14-8) that made its fifth postseason trip in six years. Oregon also placed sixth in the Pac-12 – its third, league upper-division finish under Moore (and sixth overall since the creation of the Pac-12 in 1986).

UO capped the ’11 regular season ranked No. 13 nationally – its 73rd top-25 ranking since 2007 and highest of the season. The Ducks beat four top-five teams (and another top-seven-ranked squad) during the slate, including its first wins vs. top-ranked opponents.

Under Moore, the Ducks have beaten all nine conference opponents at least once the last three years, and made him only the second Duck mentor to do so in his career.