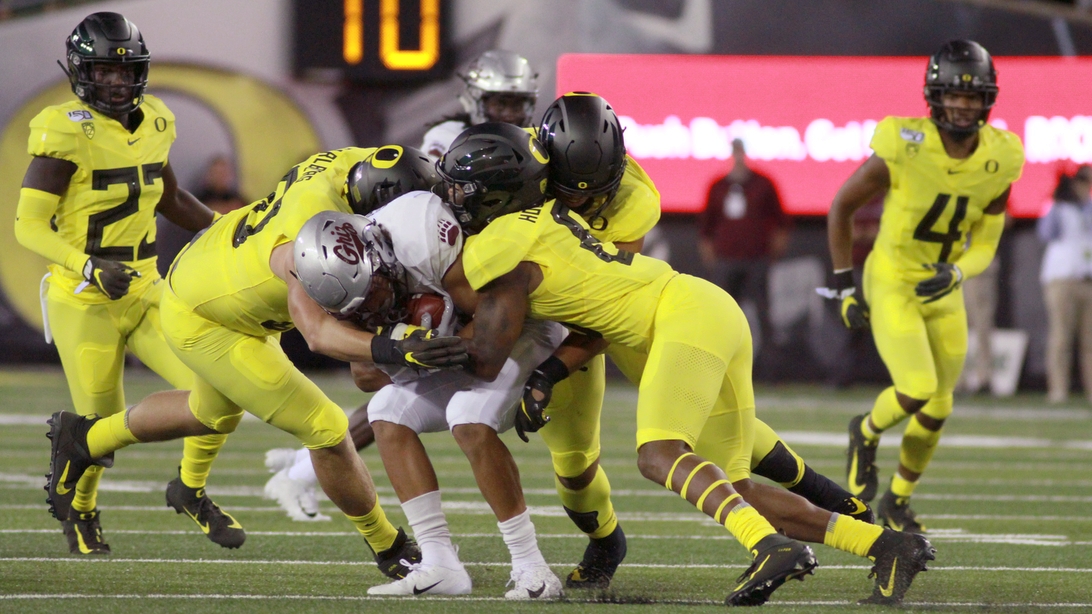 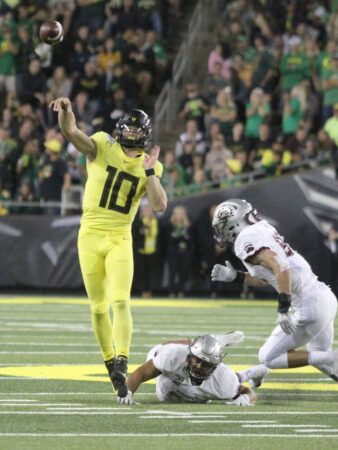 Give Montana credit. It didn’t come into Autzen Stadium to be just another easy win for the No. 15 Ducks over an FCS team.

The Grizzlies made sure Oregon had to work and earn every single thing it got tonight. But Montana may not have counted on what is quickly becoming one of the best defenses in the nation to completely shut them down.

The final score on the Autzen scoreboard might have read 35-3, but this wasn’t the cakewalk for the Ducks as it was last week in the 77-6 win over Nevada.

Oregon’s defense held Montana to just a measly eight yards on the ground after the Grizzlies came into the game averaging 159 rushing yards in their first two games of the season. The Ducks also held their opponent out of the end zone for the second straight game.

Montana finished the game with 242 total yards and held last year’s Big Sky Newcomer of the Year, Dalton Sneed, to 184 yards through the air.

On the other hand, Oregon quarterback Justin Herbert finished his second straight game with five touchdown passes. The 49,098 fans saw Herbert throw a touchdown pass for the 31st consecutive game.

“We’re evolving as an offense and he’s (Herbert) taken completing ownership of the offense,” Oregon coach Mario Cristobal said. “He was extremely accurate. We might have dropped a couple today, but we’re catching the ball a lot better. (Justin) made some impressive plays where he was wrapped up and beat some pressure and naked boot legs.”

It was a close contest at halftime as the Ducks took a 21-0 lead into the locker room thanks to a late touchdown pass that not many around the country can make. Herbert avoided one would-be defender and hit Johnny Johnson III in the corner of the end zone with a bullet pass in midstride. The 18-yard strike was the only score in the second quarter with just 10 seconds left before the break.

That NFL-style scoring play ended a quick five-play, 67-yard drive that took just 44 seconds to complete. The drive was greatly helped out by a late hit personal foul penalty that set up the touchdown on the next play.

Although it was just a three-score game at the break, one had to feel like that was more than enough with the way the Duck defense was performing. Defensive coordinator Andy Avalos has to be happy with what he saw in this Pac-12 After Dark contest. Oregon hasn’t allowed a touchdown in over 120 minutes of game action and none at home as of yet.

The Ducks padded their lead to 28-0 on Herbert’s fourth touchdown pass, a quick 1-yard swing pass to Johnson, his second touchdown of the night.

Montana finally managed to sustain a drive and got to the Oregon three-yard line before the Ducks stuffed the Grizzlies and they had to settle for a 25-yard field with 18 seconds left in the third quarter.

The final tally came when Herbert found Jaylon Redd for a 10-yard touchdown to complete the eight-play, 85-yard drive on their first drive of the fourth quarter.

Oregon managed to take the lead quickly on its first possession.

The Ducks took the opening kickoff and drove 75 yards on eight plays and scored when Herbert found Jacob Breeland for a five-yard pass and the 7-0 lead.

That wouldn’t be the last time Herbert found his favorite target for a touchdown.

Breeland caught has second touchdown late in the first quarter when he found himself wide open on the right sideline. Two defenders went to cover the swing pass and left the tight end wide open. All Herbert had to do was to make the throw and he did. The 17-yard touchdown ended a nine-play, 85-yard drive to give the Ducks a 14-0 lead.

With the non-conference season out of the way, the real test now comes as the Pac-12 gauntlet begins for the Ducks next week with a trip to Stanford. The Cardinal are 1-2 and they’re coming off a 45-26 beating at the hands of Central Florida. The Ducks and Cardinal kickoff next Saturday at 4 pm on ESPN.